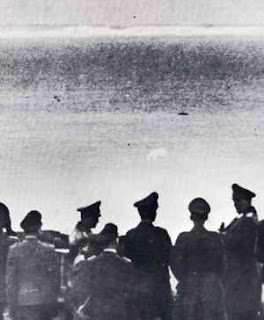 April 1941 – it took longer than expected (and this delay cost Reichsmarschall Goering another diamond-studded oak leaf cluster to his Grand Cross of the Iron Cross) but the Luftwaffe has finally crushed the resistance of the RAF over southern England.

With air superiority established, the long-planned seaborne invasion of Great Britain can at last commence.

We join the action in the morning of 1 April 1941. The scene is the sleepy coastal town of Warmington Quim-on-Minge. As the villagers awake, the country air is split by the drone of the air-raid sirens and clouded by the billowing silk of parachutes! German paratroopers drift gently to earth near the village as a mile or two away, the first wave of German troops and tanks hit the beach.

But not all the villagers are still laying abed. Captain Meriweather Augustus Dimbulb-Entwhistle has mobilized the village Home Guard in anticipation of just such an event. While the Captain is an enthusiastic soldier, his leadership skills are somewhat limited to the “Fix… BAGNETS! CHARGE!!!!!” variety. Fortunately, his senior NCO, Sergeant John Blobby, is a canny veteran of the Great War who has a great deal deeper appreciation of the tactical arts. If only Sergeant Blobby can make his own voice heard over the Captain’s…

Other villagers stir as well. Hidden radio sets crackle into life, transmitting code words in German. These secret fifth columnists hurriedly dress and head outside, moving toward a rendezvous with England’s enemies, eager to provide them the first-hand information they need to conquer the island realm.

Elsewhere, a Royal Tank Corps Instructional cadre is completing familiarization runs with the new Churchill tank. They’ve decided to head into the village for brekkie at the Queen Vic public house.

Unbeknownst to the tankies, a platoon from No.4 Commando has been stalking them for several hours, on an exercise practicing stealth and fieldcraft. Little had they anticipated that their skills would soon be put to use in a “live-fire exercise”!

But now the German paratroopers have landed. Their weapons in hand, obtained from airdropped containers, they move swiftly from their rallying points towards the predetermined objectives around the village. Securing these important objectives, they will await reinforcement of infantry and armour moving inland from the beachhead.

WHAT COULD GO WRONG?


Find out starting at 12 noon. Pub lunch of pie and chips to be served. See you there and Happy New Year!
Posted by Dallas at 11:20 AM

I'm sure the early-mark Churchills will function perfectly, in keeping with the fine tradition of top-performance by British-designed tanks in WW2...