Check Your 6! - Pushing Into France 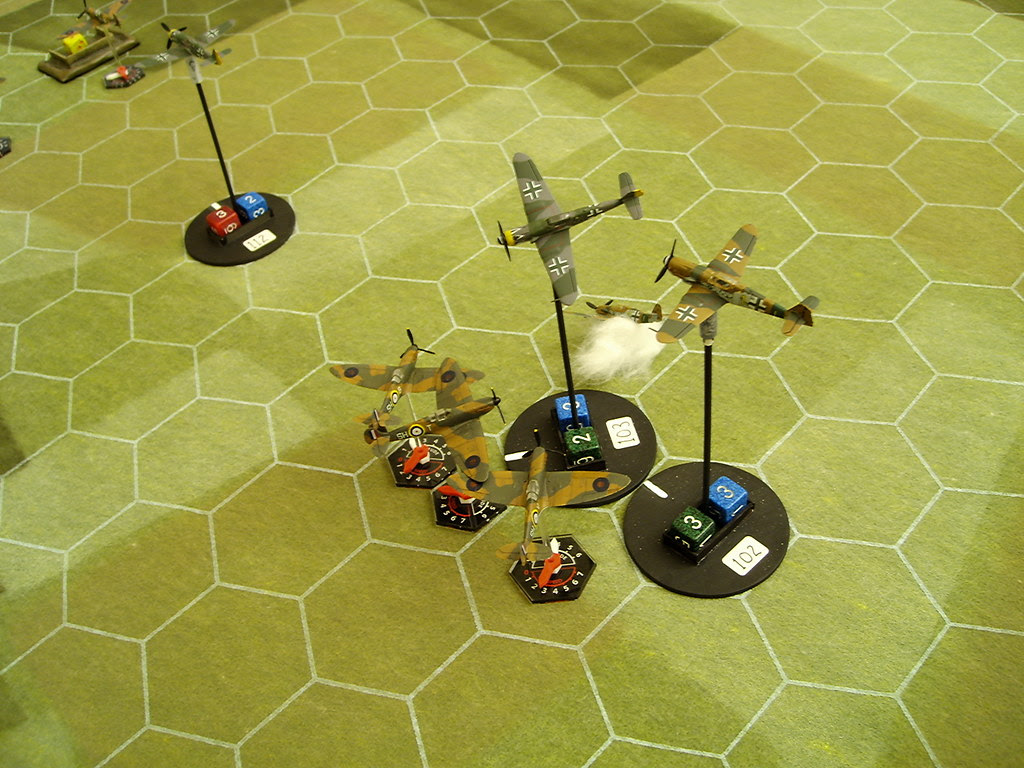 Situation:
The setting was January, 1941. As part of a "Rhubarb" patrol, two 3-plane flights of Spitfires from No. 64 Squadron were on a fighter sweep over Calais. They spied a target of opportunity, a small ammo dump. From a nearby airfield, a ready flight of defending Luftwaffe Bf-109s was scrambled to intercept them.

On Dec. 28 I hosted another Check Your 6! game. Kevin, Brian, Byron and Ray each flew a vic or rotte of planes. Dallas dropped by after work (!) to lend morale support. This was the first time playing CY6! for Byron and Ray, but the game mechanics are simple enough that they were well into air combat tactics in a couple of turns. The scenario was a variation of the "Leaning Forward into France" scenario, taken from the Over the Channel: Battle of Britain scenario book.

The table was 6' x 4', using a Hotz Artworks European Fields mat. The ammo dump was near the eastern (short) table edge. The RAF came in from the west. Brian ran the ground attack flight of 3 Spits, coming in at speed 2, altitude 4. Byron flew top cover, with his 3 Spifires at speed 4, altitude 6.

Kevin and Ray each flew a rotte of 2 Bf-109s. Rolling randomly, they arrived on the table to the north and south of the RAF flights at altitude 2, giving the RAF the height advantage. Clearly, the German early warning system was lacking!

Brian dived to treetop level to be in a position to strafe the ammo dump. Meanwhile, Byron mixed it up with Kevin's and Ray's Bf-109s. In an inspired bit of tactics, Brian peeled off a single Spit, to even up the dogfight behind him.

The photo above illustrates the turning point at mid-game. In the same turn, two planes from different flights on either side ended up in the same hex at the same altitude. This was a result of the simultaneous movement that is a main feature of CY6! Brian's and Byron's planes managed to miss each other. However, Ray and Kevin were not so lucky - two Bf-109s collided in mid-air, sending one crashing to the ground and leaving the other heavily damaged. Note the smoke of defeat (or smoke of victory, depending on your point of view).

Subsequently, Kevin's damaged plane was shot down by a Spit. Down by half their number, the Germans gamely carried on.

Meanwhile, east of the furball, Kevin's Rottenführer had set his sights on Brian's other two Spitfires: 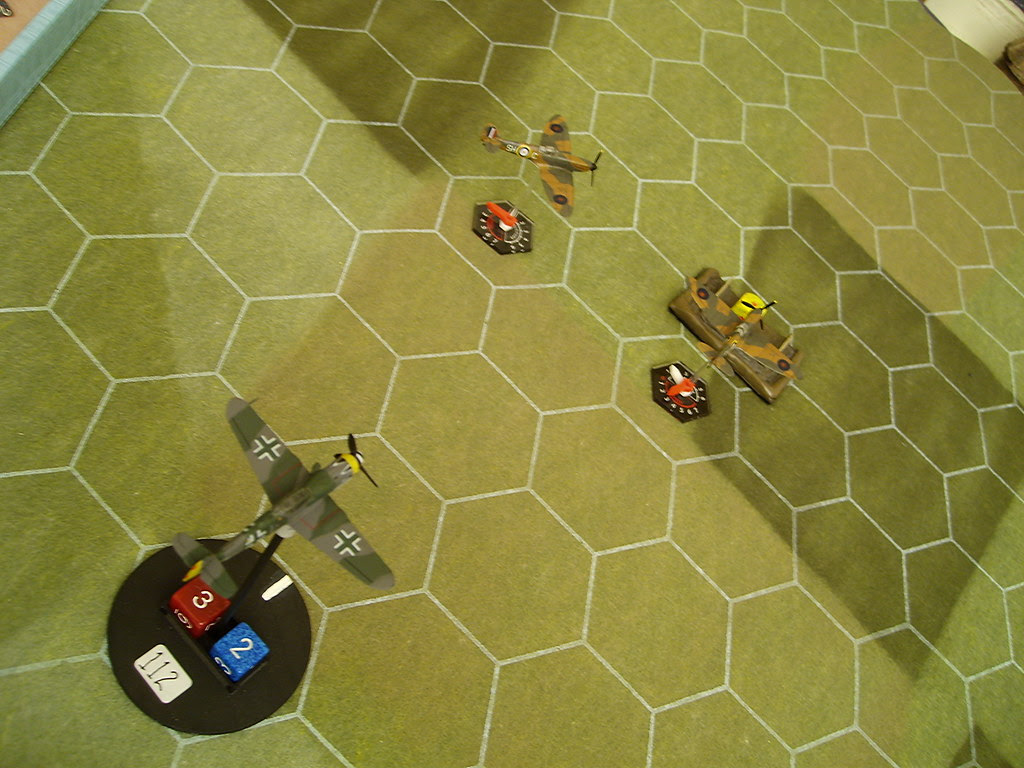 The range and deflection made for some tough shooting, and Brian managed to score enough hits to send the ammo dump up in a fireball.

Thanks to everybody who showed up, especially during such a busy time as the Christmas holidays. Special thanks to Kevin, who took the great photos.

I just received 3 "egg scale" Bristol Blenheims (they're Furuta toy surprises) in the mail. Next time, we can run an Operation CIRCUS mission, with Bomber Command supported by Fighter Command, and more defending BF-109s.
Posted by DaveV at 7:21 AM

Dave - great report.
Thanks for posting on the site!