Battle Report - Back To The Drawing Board for "Black Eagle" 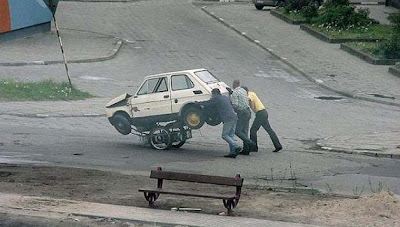 Thanks again Greg for another enjoyable (not to mention awesome-looking) game, and well-done Mike F. on the gorgeous British force.

I ran the Bundeswehr last night... "ran them" into the ground! Three successful command rolls allowed the battlegroup to roll up onto the hill objective, into cover of the woods, behind Cam's T-90 regiment... so I didn't feel too bad when I failed the last command roll to light Cam's tanks up from behind. The next turn Cam's boys about-faced and ran up to the edge of the woods. I took op fire and knocked out one and suppressed another, I think. Still no worries. Cam opened up and suppressed one of my tanks.

Then it was the NATO turn again and time to light those muthas up!! I only needed to make a roll of 9 or less on 2d6. Result... 10. FAIL. So there we sat, twiddling our thumbs and listening to David Hasselhoff on the radio net. (But it just occurred to me, we were within Initiative distance so could have fired anyway, right Greg?) Damn! This is what happens when you play a different ruleset every week ;-)

Cam's turn again and he made four or five Command rolls in a row (and I failed my roll to take op fire, again)... so he just lit up my battlegroup. Ouch. Next time, Cam!!!

Agreed on the game - thanks for running the show Greg.

These rules were way more awesome this time around, but I still find the Warmaster ruleset to be a little bit too swingy. I rolled vegas and wiped out a Leopard battalion or two, but meanwhile Dave V beat the odds and then some to shoot himself repeatedly.

I have to admit to preferring slightly more consistency in orders.

Holy s**t!! Dallas - you are completely correct - initiative would have allowed to you take one shot (you would still have had to roll for further firing).

It was my mistake, but I choose to blame the rules!!

Thanks Greg for running a great game! As always, thanks Dallas for hosting.

RE: Rules: Does Future War commander solve any of the problems in this game engine? So many rules sets haven't emphasized the command and control element, but rather emphasizing the particular type of shell being fired - as if a battalion or regimental commander would care. Anyone remember the WRG ultramodern rules?

BTW, the Belarus tankist battalion commander should be awarded the "Hero of the Russian Federation" award for leading his men so ably, despite the steaming pile they were dropped in.

Dave V - based on last night's action, your command is actually home to a pair of ceremonies - "Hero of the Russian Federation" (includes life-time supply of free Gazprom T-shirts) for the tankist commander, and following the award, the commander of the BTR battalion was hanged for gross dereliction of duty!

Re: Future War Commander, I haven't yet tried it, so I can't say for certain, but I suspect some problems would remain (like the potential for multiple rounds of firing). On the other hand, I think the army lists are as culpalble for issues with Cold War Commander as the rules, and the lists for Future War Commander seem a little more balanced out, so there would be more result obtained with less rolling. Still, I won't know for sure until we try. I want to run a game using the Epic 40k figures.