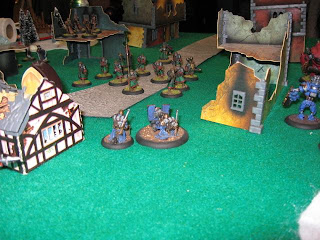 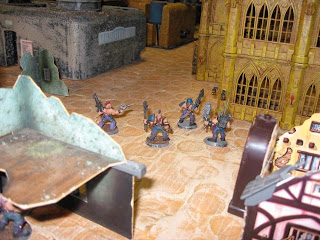 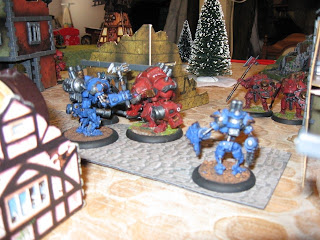 Received a note the other day from Conscript Sean, currently living "in the East", about a game day he held for his pals there. Over to Sean...
"Things went quite well on Tuesday for our gaming day. We managed to get in two games of Necromunda, including a 4 way gang battle, and two introductory games of Warmachine. None of the five guys who had shown up had played WM before, so I ran the rules for the first game, then we had a 2 vs. 2 750 pt game.
First off, Nathan and Danny Mac threw down in a Caine vs Sorscha 500 pt duel. Nathan took the early advantage, with his Widowmakers snipers picking off half of the Arcane Tempest Gun Mages and causing them to rout for 2 turns. Then he boldly advanced his warcaster, a Destroyer and his Man o War shocktroopers forward to engage the cowardly Cygnar troops and their accursed gun powder weapons. Danny countered by charging with his heavy 'jack, and a light, but they were no match for superior Khador armour. However, after using Sorscha to try to gun down a warjack, Nathan left her dangerously exposed in the line of sight of Lt. Caine, who proceeded to give her a starring role in a Sam Peckinpah gun battle. Game over due to caster kill. Danny Mac then went home, not wanting to jeopardize his only win over Nathan (in any game) for quite some years.
Next came the four way Necromunda gang battle. Danny Ray and myself took rival Goliath gangs, while John and Nic took Van Saar gangs. I have a feeling that was to max out on the max amount of plasma weapons, as there a lot of 8 figure gangs out there... Danny and John proceeded to square off, with Danny coming out the worse for wear, while I shot up Danny and Nic on the way through to get to John. Danny soon bottled, as did Nic, then John decided to bottle when faced by my more experienced Goliaths. Everyone got much underdog XP, and there were advances all around.
The last game was the Nemo/Haley Trencher force (Nathan/Danny Mac) vs. the eSorscha/Butcher Winter Guard (Sean/John) force. Again, this was another learning game, and it was noteworthy in that the warjacks spent the game circling the board, while the infantry carried the engagement. The Elite Cadre Winter Guard proved their mettle time and time again, with the Tough rule (recover from a wound on a 5-6) allowing them to successfully carry the charge on the Trencher Chain Gun. On the other side of the board, the Trenchers successfully charged the Guard Mortar and Field Gun, but then were cut to pieces by eSorscha and her Cyclone spell. The game wrapped for time, with all casters on the board. I think the game has made an impression out here.
Sean"
Posted by Dallas at 11:06 AM