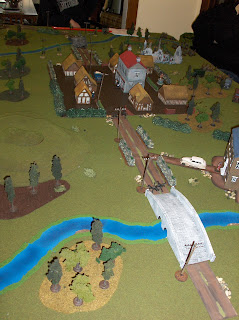 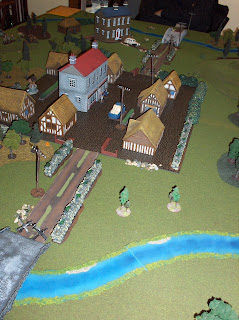 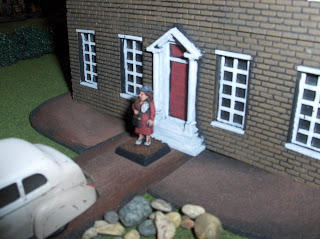 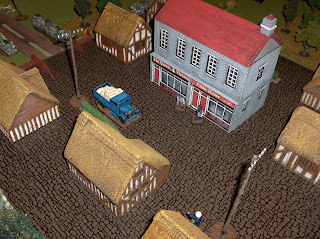 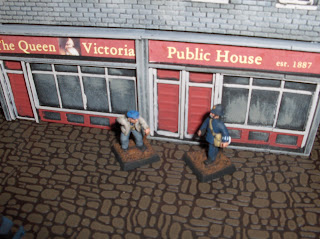 Short version: It was fun!
Long version:
Conscripts Dave V., Cam, Mike B., Mike F., Bill, Frederick, and Brian made it out for the game on New Year's Day. As reported previously in the blog, the scenario was "Operation Sealion" with Frederick, Dave and Mike F. taking the part of the intrepid British Home Guard and Royal Tank Corps instructors, and Brian, Cam, and Bill rolling with the Deutsches homies. Mike B. was out for a bit but soon retired homeward with "flu-like symptoms" acquired as a result of activities the night before...
(Lunch was a delicious pub platter prepared by Pam (!). Savoury meat pie, steak-cut chips, and oven-barbequed carrots, washed down by a frosty brew of one's choice. Top meal!)
The game began with the German paras and British Home Guard entering the table. There were a few turns of "manoeuvre to contact" due to my dense terrain layout on the 8x5 foot table, but the two sides came to grips in the village, with Mike's troops in the pub (good lads) and Bill's FJs hunkered in adjacent houses. Some sniping back and forth occurred but the real pusgh came when Brian moved on table with his armoured assets - three Pzkpfw 38(t)s and a mighty StuG III. After some random boggery (!) in the river, the StuG III started blasting away at the pub, eventually bringing it down on the heads of the hapless Home Guard with tremendous loss of life. One more objective obtained for the invaders, nobody said it had to be intact to count!
Meanwhile the 38(t)s were dashing for the hilltop objective, in a race with the Stuart Honey driven by the lead RAC instructor. It was a dead heat but the Home Guard platoon command section still sat on top of it, as well.
The civilians on the table dashed hither and yon, controlled by whichever side had won the initiative for the turn. In the end the British controlled 5 and the Germans 3, with the British having captured the only civilian that was an actual Fifth Columnist (this was determined by a random die roll made for each civilian at the end of the game - on a "6" he or she was a Quisling).
It was a fun game. Next time I would make some changes - starting the Home Guard and FJs "on table" in random spots would have moved things along a bit. The rest seemed to work well enough.
More pics in the next post...
Posted by Dallas at 7:21 PM