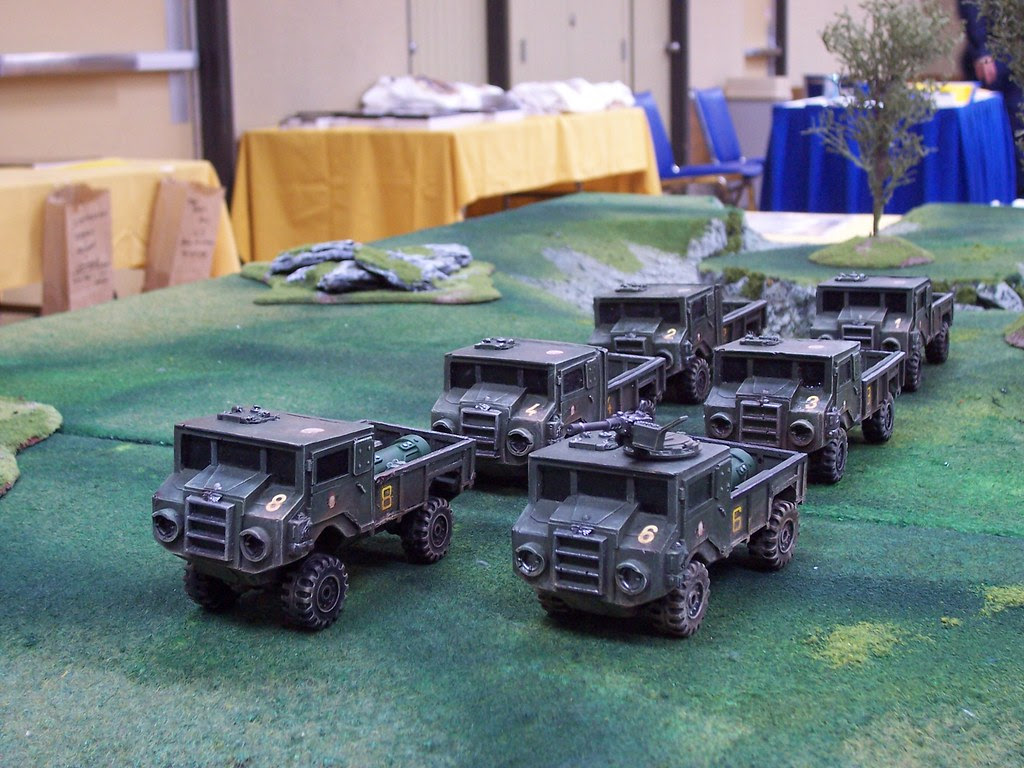 Corporal Parnell shifted the truck into third and reformed to cross the open space ahead of them. The Planetary Defense Force trucks quickly sorted themselves out into a double column and picked up speed across the open ground. Lance, his mechanic, tracked the heavy stubber back and forth. Suddenly he let go a long burst toward the tree line and Parnell was horrified to see attackers leap from hiding on both sides of his convoy.

“Convoy! Break! Break! It’s every truck for himself – save yourselves as best you can!” he roared into his microbead as he jammed the truck into 4th gear and stomped the accelerator all the way to the floor…

***
Last night, on 40K night at the local Games Workshop store, MikeM and I play tested the 5th Edition version of “Truck Stop” – an Astronomi-con tournament scenario. Each of the six trucks was transporting a cargo canister. The players’ job was to disable the trucks and secure the cargo canisters while preventing their opponent from doing the same. All the trucks started in a double column in the middle of the table. Each turn, in between each player’s cycle, the trucks would move 3D6” in a random direction. The cargo canisters could be seized by anything with hands, not just Troops, so Dreadnoughts with DCCWs and Wraithlords could potentially capture the cargo canisters.

My Fire Prism wasn’t quite finished yet, so I stuck with my usual Swordwind semi-mechanized list: 4 Wave Serpents filled with Aspect Warriors (2 x Dire Avengers, Howling Banshees, and Fire Dragons), a two-gun Wraithlord, all led by a Farseer.

I won choice, so I chose to go second. Mike chose the table side with slightly more cover. He set up all his infantry in a gun line in craters and woods, keeping the vehicles and cavalry in reserve. Looking at all the anti-tank firepower, I used the reserves denial ploy and declined to set up. (Note: this cost the Eldar later in the game, since the Farseer and the Dragons didn’t show up until 4th turn.)

As it turns out, Corporal Parnell’s shouted order was his last. The Guard opened up with all their heavy weapons against the soft-skinned trucks. As a result, four of them were destroyed in fiery explosions, taking their cargoes, and Corporal Parnell, with them. One truck was immobilized in the middle of the table, leaving the tail end Charlie truck free to move. Carrying its precious cargo of Unobtanium ™, it turned around and drove slowly toward Guards’ right flank corner. The driver was obviously in shock from witnessing all the carnage in front of him.

The scenario allows for first turn Reserves, and the Eldar were rolling hot. Everything but the Farseer and Dragons showed up. The three Wave Serpent skimmers moved toward the centre of the table, relying on the immobilized truck and moving flat out to provide cover saves. The Wraithlord came on just left of the centre of the table edge, mixing it up with infantry directly across the table.

The Guard tanks and cavalry showed up. The Hellhound came near the Guard’s right table corner, the Leman Russ showed up right of centre. The Rough Riders came on the table on Mike’s left. The cav and an infantry squad pushed on, in a left hook. Concentrated lascannon and plasma fire blew up the Banshees Serpent, leaving 6 of them on the ground. The mortars dropped several blasts on them, leaving two of the girls alive.

The mobile truck kept going for the far corner.

The two Avenger Serpents skimmed at combat speed over the immobilized truck. They moved within mutual supporting distance, setting up for disembarking next turn. Their fire killed some Guardsmen, including two members of the Imperial Guard commander’s bodyguard. The surviving Banshees reached the immobilized truck. Ignoring the crew cowering beneath the truck bed, the Aspect Warriors grabbed the cargo canister – it took two normal infantry to carry each prize, but only one monstrous creature or walker.

The Guard’s mortars landed dead on the Banshees. Supported by heavy bolter fire from the flanking squad, both Banshees went down in a hail of shrapnel and bullets. The right hand Avenger Serpent was immobilized by the anti-tank squad’s rocket launcher and it had its turret shot off; the other Serpent was shaken. The Hellhound’s heavy bolter failed to stop the last truck.

Perhaps seeing that the Guardsmen were the only ones shooting at him, the truck driver turned around and headed back towards the Eldar side of the field. 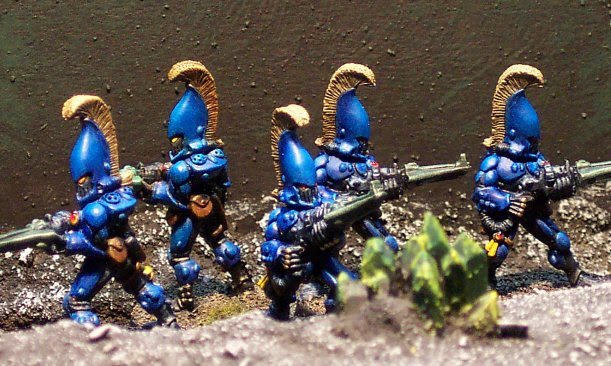 Going against the usual Eldar grain, the Aspect Warriors had to trade lives for time and distance. The right hand Avengers disembarked from their immobilized skimmer. A Bladestorm would wipe out the squad in front of them, but the return fire would be brutal. Their Exarch ordered a charge. If they could contact two squads, it would tie up a few Guard heavy and special weapons, and with luck they would survive, locked in combat, for a couple of turns. They must have stumbled getting out of their Serpent, since they rolled a “1” for their run move. They contacted, defeated and broke the squad right in front of them, then consolidated within 6” to keep them broken. The other Serpent moved left, setting up some left flank action next turn. Meanwhile, the Wraithlord immobilized the Russ.

The broken Guard squad ran off the table. The Hellhound fired both its flame gun and its heavy bolter at the escaping truck, doing nothing. Concentrated fire from multiple Guard infantry squads wiped out the disembarked Avengers. Guardsmen on both flanks started to run, to try and capture the remaining prizes.

The surviving truck kept on towards the Eldar, who had yet to fire at it.

At the top of their fourth turn, the Farseer and the Dragons finally showed up. The Serpent landed a plasma shell on the Rough Riders, who passed their pin and morale checks only through the presence of the Guard commander’s banner nearby. The other Avenger Serpent backed up towards the mobile truck; the disembarking Avenger squad Bladestormed the truck, blowing out all the tires and wrecking the suspension, but keeping the cargo intact. The Wraithlord moved behind the truck, wrecking the Hellhound’s flame gun with a Brightlance shot.

The Guard flanks kept advancing. In the middle, the Guard commander and the surviving Rough Riders made for the center truck. The mortars and the Russ were firing like Daniel Boone, landing small and large blasts on the Avengers, reducing them below half. Somehow, their morale held.

The Wraithlord reached into the other truck and grabbed the cargo canister. The Farseer also decided it was time to lead from the front. The Dragon Serpent moved to interpose itself between the Rough Riders and the central truck. The Dragons and the Farseer dismounted, with a clear LOS to the Guard command squad - killing the enemy commander counted for a secondary objective. They didn’t even need the Doom the Farseer cast, as the commander and his bodyguards disappeared in a hail of actinic fire.

After the Wraithlord seized the canister it could not fire any weaponry. If the game went another turn, the Fire Dragons could be vapourized by the Russ.

The death of their commander must have disrupted the Imperial Guard’s commo net. Rolling for random game length the game ended, leaving the Eldar in possession of both a single canister and the win.

The game was a real nail-biter and a lot of fun.

The tweaking done by MikeM and Christian to the scenario for 5th edition all seem to work. There were no ambiguities in all the various special scenario rules.

The MVP award surely had to go to the Guard mortar section, who served their weapons with great skill throughout the game.

(As an aside, if some of the protective vehicle upgrades on the Serpents are removed, that frees up enough points for me to again field a cheap, Dire Avenger-style Autarch, whose Master Strategist ability allows a bonus to Reserves rolls…)
Posted by DaveV at 7:46 AM

Good to see that "Bladestorm!" figured prominently in the report... sounds like a fun scenario!

"Truck Stop" is a lot of fun. I'd never played it before.

The trucks in the photo are resin castups of a scratchbuilt master, made for MikeM and Christian by some folks in Toronto.

I'd like to run the scenario some Thursday night. I managed to buy some plastic toy pickup trucks from Dollarama. When painted up they'll look more like Mogadishu "technicals" than actual army trucks, but I think they'll do.

I really did get a tad overzealous with the trucks turn 1 but my damage dice were absolutely on fire.

Then again, so were the trucks when those lascannons were done with them... ;-)

It was great fun. A few photos of the models I was using can be found here: http://www.pan-am.ca/Mike/40k/Danikan/index.htm