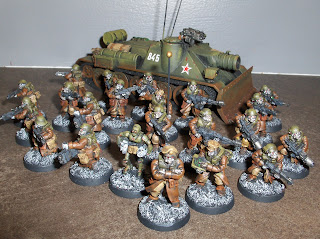 A while back I posted some "in progress" shots of my Pig Iron Kolony Militia project. Now that they are done (and have been for a week or so) I thought I'd post a final "portrait" of the crew with their converted SU-300 self-propelled assault gun. Since the last update I had finished the groundwork, painted the eyepieces using a simple "gem" technique and a gloss varnish and did some general touch up and matt varnishing. The standard bearer has yet to be given his "red rag" but Brian assures me it's coming and I know it will be top-class work - he is the man behind Vaubanner Graphics (http://www.mts.net/~homenic1/vaubanner/vaubandex.html), purveyors of top-quality historical wargames flags.
This was a pretty fun project and I think I will be adding to the "army" with another booster pack of ten models to fill out the platoon to a full strength of 32.
Posted by Dallas at 12:14 PM

Dude - those look great! We need to roll with a game of "SpaceKrieg" to get those burned up.