Notorious smuggler, rebel and terrorist Han Solo was captured by Imperial authorities yesterday after an intense gun battle.
Solo and his terror gang had stolen valuable datacards from the Imperial archive at the Sollaestian University in Sollaest City. The heist coincided with a general insurgency by fringe elements on the planet, which was swiftly put down by a fresh surge of Imperial troops dispatched to assist the Sollaestian armed forces in maintaining order.
Captured along with Solo were his Wookiee associate, Chewbacca, along with several other notorious mercenaries and guns-for-hire collaborating with the insurgents. Solo's ship, the Millennium Falcon, was also taken by Imperial forces and will be held as evidence in the civil trials expected to be brought by Solo's many victims.
Solo, a one-time fighter pilot and deserter from the Imperial Navy, was tried summarily by court-martial aboard the Star Destroyer Contemptor and sentenced to 99 standard years' hard labour in the Spice Mines of Kessel.
-------------------
Excellent turnout last night for the Star Wars game. Bill, Frederick, Mike F., and Perry took the part of the Imperial forces and Sollaestian authorities (for which I used Rebel Fleet Troopers as models) while Cam, Wes, Mike B. and Brian controlled Solo and his "terror gang" (mostly low-level Fringe characters with some hard men included in the form of bounty hunters). 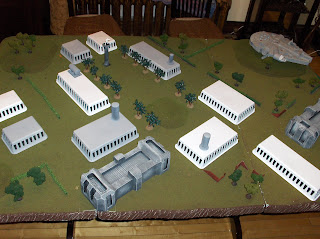 the table
The terrain layout represented a portion of a University campus with many Star-Warsy-looking buildings with some green space and trees here and there, on a 6'x4' table. The Millennium Falcon was set on one corner of the table in a small park, with half of the "rebel" forces. Solo and Chewie, along with the rest of the rebels, started in the opposite corner with their objective being for both of them to reach the Falcon (major victory) or for Han to get there by himself (minor victory). The Imperials started off deploying from the long table edges between Solo and the Falcon, their goal being to prevent the victory conditions. 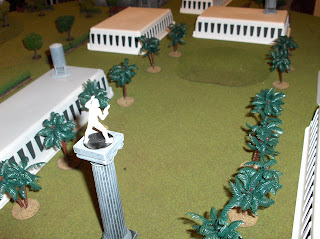 "our founder" on the quad 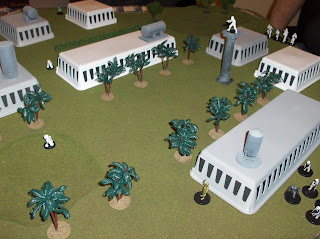 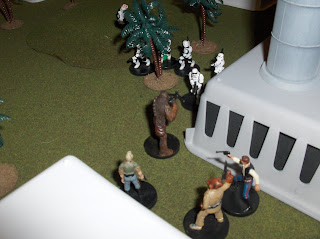 Chewie walks right into it 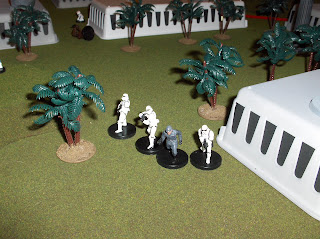 The game quickly developed into two battles: Solo and Chewie vs. one half of the Imperials, and the bounty hunters vs. the other half. I balanced the points pretty much exactly in the hopes this would create a close game, and luckily this is what happened. After shooting down a few Stormtroopers, Han decided to beat feet in earnest across the table toward the Falcon. With his full complement of hit points, he was within three moves of the ship and was surely thinking "what could go wrong?" 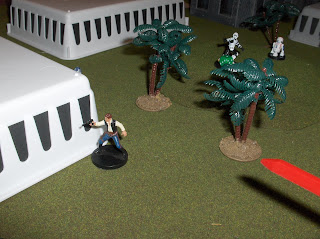 Han gets it from behind from a "Biker" - practice for the Spice Mines?

What went wrong for Han were two Biker Scouts. With Han running flat out toward the ship, TX-436 and XK-120 both took careful aim with their blaster pistols. The chances of them hitting Han were not great, and even if they did, the 10 points of damage they cause would hardly put a scratch on Han's 80 hit points. Unless they rolled natural 20's for double damage... which Frederick proceeded to do... for BOTH of them. Best. Troopers. Ever!! Where were these guys on the Death Star??
Anyway, the 40 points of damage they collectively caused Han probably won the game for the Imperials. There were no heavy weapons left on the table so the most damage anyone could do to him was 10 points, but getting halfway home in two shots enabled the four or so other Imperials left in play to take him out within one move of the Falcon's ramp.
(As an aside, after nailing Han, both TX-436 and XK-120 were put out of action. They made full recoveries, only to be wounded again in the battle of Endor. TK-436 was clotheslined by a tree whilst chasing Leia on his Speeder Bike, and XK-120 was punched in the junk by an Ewok). 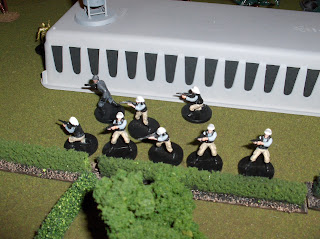 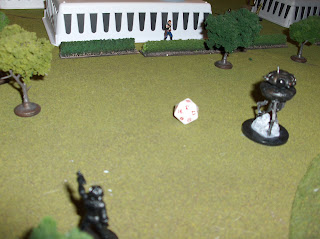 In any event, the game ended with Han being put out of action by a well-aimed shot from Perry's TIE Fighter Pilot (!) assisted by the Probot (!!). A very close game and a ton of fun. I think the table looked good, too. Many of the buildings were actually made from Sterilite baskets purchased from Wal-Mart, thanks to an idea from TMP member Inari7.
Posted by Dallas at 3:33 PM

The basket idea is very cool.

That is awesome! Sorry I couldn't make it out.