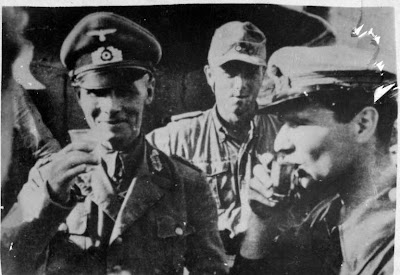 Last night the Conscripts gathered at Dallas' place for this week's game - World War 2 in 15mm scale, using the Flames of War rules by Battlefront. The game was set in the North African theatre in 1942, during the Gazala battles, which featured many swirling tank battles among the dunes. I love a good tank battle, and as it was the first battlefield appearance for my Afrika Korps and 8th Army troops, I was really looking forward to the game.

Turnout was excellent - Brian, Mike F, Mike B, Frederick, Kevin, Dave V and Cam all came out to blow up some tanks.

The scenario featured a force of British troops from the 7th Armoured Division - the "Desert Rats" - trying to hold a small village in the hopes of blocking the rapid advance of the 21st Panzer Division. The village was the sole objective, and the Germans would have 8 turns to completely capture it. Any other outcome would be a British victory. 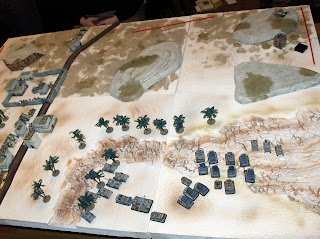 The British force was comprised of two lorried motor platoons, with light mortars and AT rifles, reinforced with a Vickers HMG platoon, and a platoon of three Universal Carriers with extra MGs. For armour, the Brits had a troop of three Crusader IIs (wow - a 2-pounder!) and two troops of Grant tanks (ok - 75mm - that's better). All-in, the British force was worth about 1600 points. 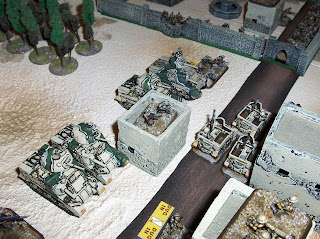 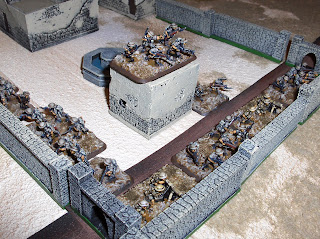 British in the village

The Germans had a larger force - two full-strength panzer grenadier platoons riding in trucks, a section of two 8cm GW34 mortars, a "retro" platoon of 3 light Panzer IIF tanks, and three platoons of panzers which between them contained 6 Pz IIIJs, 2 Pz IIILs (all had long 50mm guns), and a Pz IVF1 (with a "short" 75mm). The German column also contained a towed 88mm FLAK cannon. All together, the Germans outnumbered the British points-wise. The DAK detachment was around 2100 points - but the British had the advantage of starting dug-in. And the Germans had to deal with the wadi.... 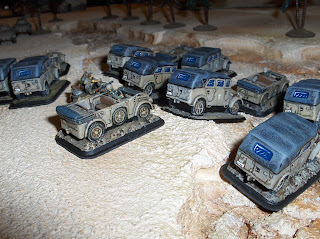 The German advance was severely constrained by a wadi that nearly all of their platoons would have to cross before they could maneuver against the village. The Germans were allowed to designate Panzer platoons for an attempted flank arrival (which would avoid the wadi) if they wished, but did not know when those would show up.

The narrowest section of the wadi was also closest to the British positions, so the Germans had to choose between a much longer/slower (if safer) crossing, or going straight at the British and coming under fire from a troop of Grants. Either choice meant difficult going, checks to bog down, and much entertainment (for me, at least).

Dallas, Frederick, Brian and Mike B took command of the DAK troops. Dave V, Kevin, Mike F and Cam rolled with the Brits.

The British dug into the village and environs, and held a troop of Grant tanks in reserve off table. As the game started, the DAK began their slow advance through the wadi. Brian took a PzIIIJ platoon on a flank march, and awaited his opportunity. Fredrick led the two Panzer Grenadier Platoons and Pz IIFs through the wide section of the wadi, looking for elbow room among the hills outside the village. A few trucks and panzers bogged down, but generally they trudged ahead. The remaining Panzers headed straight at the British, and began exchanging fire with the Grant troop that was on table.

The British sat tight - Dave brought his Grants into action against the Panzers, while Mike F and Kevin pushed the universal carriers and Crusaders out into the hills in the hopes of slowing the Panzer Grenadiers.

The first point of contact was outside the main village compound, as the Panzers started to knock out some Grant tanks, and overran three sections of British infantry right in their fox holes. Dave responded with his usual agressive tactics, sending the AT rifle team and his suriving Grants hunting for flank shots (and passing the motivation checks, ensuring the Grant troop fought to the last). However, the AT rifle team missed (repeatedly) from point blank range, and the Grants managed to only knock out one Panzer IIIM before they were all knocked out.

Out in the hills, Mike F's Crusaders exchanged fire with the light panzers, knocking out a Panzer II. Mike F was hopeful of lighting up the Panzer grenadiers riding in their soft-skin vehicles, but was frustrated as ALL of the grenadiers in one platoon survived their trucks getting knocked out (nice rolling Frederick!).

Things got worse in the hills for the British as the Crusaders realized Brian's platoon of Pz IIIJs was making their flank entry, and the Germans had deployed the 88mm FLAK on the other side of the wadi. The Crusader troop was shortly reduced to wreckage. The Bren carriers made a noble stand, but were overwhelmed by fire from the Panzer IIfs, and an assault by Frederick's Panzer Grenadiers finished them off.

The British reserve Grant troop arrived, and went toe to toe over a couple of turns with Dallas's Panzer IIIJ platoon. The Mark IIIs got the better of it - the Grant troop was wiped out over two turns.

On the German side, as Frederick's second grenadier platoon - still mounted in their cool SUV-style Kfz 70 trucks - raced toward the village, they got caught by a barrage of Vickers gun HMG fire. Frederick was unable to recreate the magic of the saving throws in prior turns, and the platoon was destroyed as the survivors fled.

While the decimation of a grenadier platoon felt pretty good, the British infantry were now feeling the heat - mortar barrages rained down on the village, pinning and killing. All of their armour was knocked out. It was a question of whether they could hold out. As turn 8 approached, the infantry endured withering fire from tanks, mortars, the 88mm, dismounted panzer grenadiers, and three platoons of panzers! Command teams were killed, replaced, then the replacements were killed - one by one, the teams dropped away. Yet the British players kept passing the motivation checks! 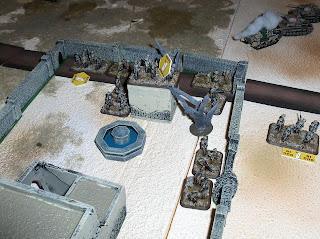 Finally, in the 8th and final turn, in which the Panzers literally began to overrun the town, the British company CO failed a motivation test, and the game ended. 21st Panzer had triumphed, and would move on to the next objective. Meanwhile, senior officers of the British 7th Armoured were reviewing the warrantees contained in the lend-lease terms for the Grant tanks...

Thanks to everyone for a great turn out and an excellent game, and thanks to Dallas for hosting. Also thanks to all for demonstrating great patience for my lack of familiarity with the Flames of War rules - stupid !#$@#ing rulebook! 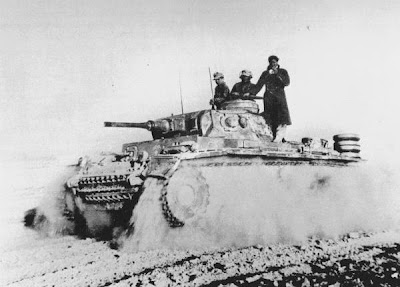 Thanks again for running the game, Greg, it was great fun! (I'll post some pictures tonight)

Also, I second your comments on the FoW mini-rulebook. All the clarity and ease-of-reference of "Shako", combined with the structural integrity of the original "Warhammer 40K Rogue Trader" rulebook... :rolleyes:

Edited to add photos - some nice ones from Kevin there, thanks Kev!

You're welcome - thanks for using some!

We missed one of the Special Rules for the Vickers HMG's too! They can fire in "Bombardment" mode - arcing their MG fire over a 40" range! THAT could have played Holy H#LL on those damn Mortars and that 88mm! ;-)

Thanks for the pictures Dallas and Kevin.

Re: the Vickers, actually the guys in the motor companies are specifically NOT trained to do this (gotta love the poor Brits) so could not have fired in "bombardment" mode.

Next time I'll have observers for the brits so they can call 25-pounders though...

No Bombardment with the MG's? --DOH! Silly Brits! As for "Next Time" - maybe it should be the Brits trying to RE-TAKE the village! Feel free to still include the Observers for the 25 pdrs though! :-)