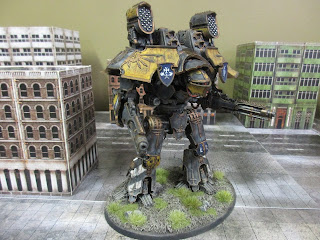 So in the accumulation phase of the Adeptus Titanicus buildup, I ended up with two Warlord Titans - one from the original "Battlegroup" box I bought at Warhammer World when we were there last year, and one from a subsequent purchase of a secondhand "Grandmaster Edition" box set. 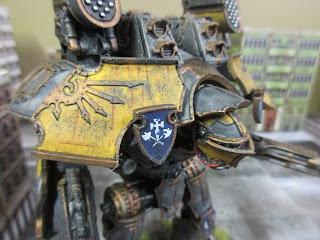 I painted one of the Warlords for the Princeps of my Legio Krytos Titan maniple, and had fully anticipated bolstering the forces of the Warmaster with the second Warlord as well. However... when Conscript Greg decamped from Winnipeg to Parts East, I re-evaluated that plan and considered that maybe since his huge Loyalist Titan force would be not likely be seen again soon at the Conscript Towers gaming table, I'd better start on some Emperor-loving opposition for the Warmaster's crew. 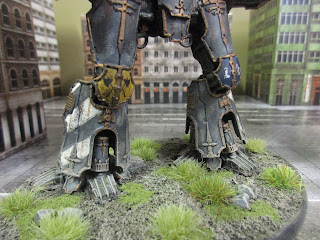 But what Legio to choose?? I looked at the "history" of Legio Krytos in the Heresy, and by far their coolest-liveried opponents were the legendary War Griffons of Legio Gryphonicus. So I decided to paint the Warlord in LG colours with the thought that if Conscript Greg ever did return for a game with his Titans, LG could be represented in even greater numbers... 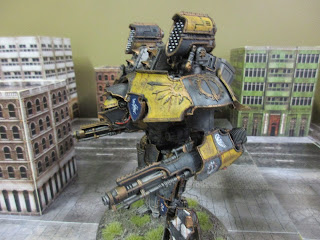 I painted this Titan in a notably different style to Greg's - I tend to go to a bit of an extreme with the weathering, probably because I like the "campaign look" and tend to get a bit lazy about painting neatly and cleanly. 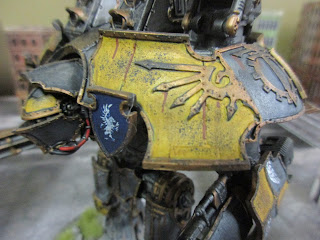 This Warlord was basecoated with Mechanicus Standard Grey and XV-88, which were overcoated with a light stipple of Administratum Grey camo and Averland Sunset, respectively. Mechanical bits are Leadbelcher and Brass Scorpion, with the latter also serving for the armour trim. Of course the whole was copiously washed with Nuln Oil and Agrax Earthshade, then decals were applied. After this came the rust streaking (Reikland Fleshshade punched up with Doombull Brown) and the sponge shipping (craft black and Rhinox Hide). Groundwork was painted Rhinox. Mournfang, Steel Legion Drab, then drybrushed lightly with Rakarth Flesh, which was carried up the legs as well for a bit of dust blending. 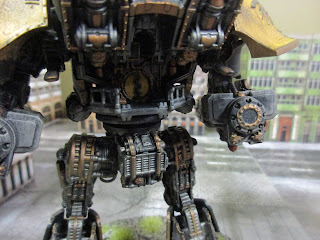 "Juliet balcony" back there for the Titan crew. 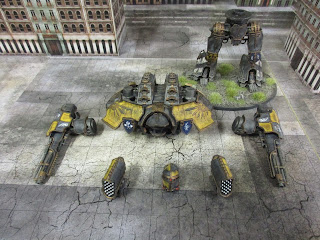 As Greg's noted in his posts, the Warlord takes magnets superbly. Here it is in its component parts. 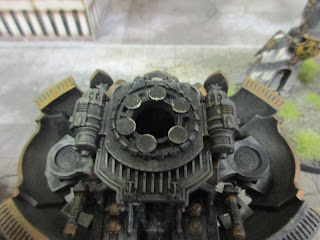 I like to be able to position/rotate the waist joint so I magnetised that as well. 5mm magnets go on the bottom of the Warlord's torso... 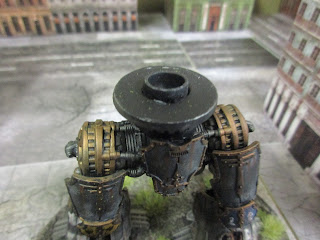 ...and stick to the washer positioned at the top of the pelvis. Using the washer has the added benefit (for me) of allowing some final adjustment of the attitude of the torso. In this case I positioned the washer to point the torso a touch downward to compensate for a bit of backward tilt that crept into assembly of the legs.

So that's it - Warlord done. Up next for the War Griffons will be a pair of Warhounds, with more on the way of course. Escalation waits for no man!!

That titan looks awesome. Much prefer a campaign look

Really well done. I like the hard-worn campaign look- a real veteran.