The scenario for the assault on the Polish Post Office in Danzig called for a number of specialized units in the German order of battle, such as the Steyr ADGZ armoured cars. It also called for quite a number of artillery units that would be placed on the table top, something that rarely happens in our games. The Germans deployed a total of two 75mm Infantry Guns (7.5 cm leichtes Infanteriegeschütz 18) as well as a 105mm howitzer (10.5 cm leichte Feldhaubitze 18M). I had one of the former that I bought years ago when planning out a Dieppe scenario, which I have since painted, but I couldn't justify the cost of the additional guns which are likely to only see action in the streets of Danzig.

Here are some stills of the two types of artillery taken from film footage of the actual attack. 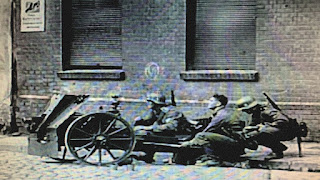 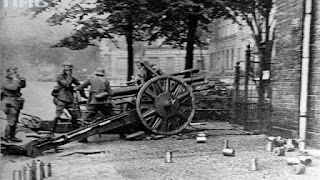 Note that the version of the 75mm Infantry Gun still had spoked wheels as they were mainly horse drawn in many early war German infantry divisions.

It was time to do some scratch building. Materials for the 75mm Infantry Gun were balsa, cardboard, paper, and bits of cork. The wheels were salvaged from some old Airfix HO Scale French Napoleonic Foot Artillery 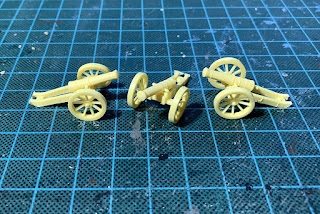 The 105mm Howitzer was a bit more complicated, as well as being a bit trickier as I didn't have scaled dimensions. For the 75mm Infantry Gun, I had my unassembled Bolt Action model as a template, but I was winging it from photos for the 105. Here's the detailed parts list for all the bits and bobs that went into the model.
The recuperator cylinder is part of a wooden skewer from a restaurant burger. The barrel is part of a hollow plastic sucker stick. The breech block is a piece of cork. The cradle is a piece of a square wooden stick that came with a potted plant. The trail was cut from 2mm plastic card. The wheel tires are garden hose washers.  The wheels are seals from a milk carton plastic spout. The wheel hubs are paper circles cut with a hole punch. The gun shield and spades at the end of the trail were cut from old War Amps key tag. It is all held together with crazy glue, model glue, or epoxy depending on material. 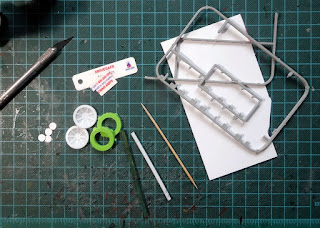 Some of the dimension in the final assembly of the howitzer are a bit off, but it will do for the purposes of the scenario. If I had to do it again, the recuperator-barrel-carriage assembly should be mounted further forward, the trail should be 30% longer, and the gun shield a bit wider. Still, I am pretty happy with the final results.
I decided to mount the two guns on bases with a cobblestone pattern on them to resemble the streets of Danzig. Here is the 75mm Infantry Gun. The crew are from my Black Tree Design 75mm Pak 40. 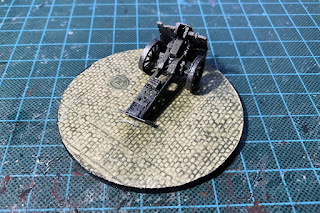 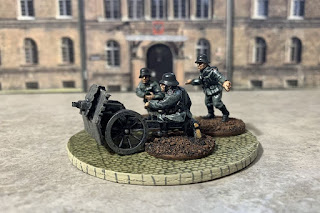 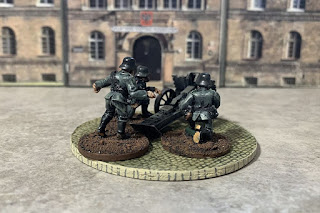 And here is the 105mm Howitzer. I decided to make a mini-diorama on the base, inspired by the photograph of the actual gun in action. The spent shell casings are short sections of plastic insulation from some thin copper wire. I sealed one end with a dab of glue, and then painted them brass. The ammo boxes were made from some scraps of foamcore with a strip of paper glued around the edges to hide the stryofoam. 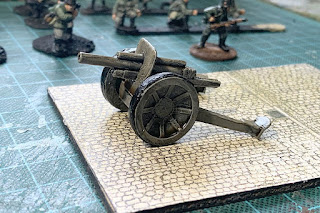 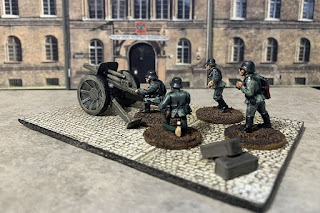 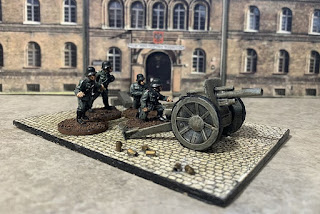 That pretty much completes the last of the necessary support weapons needed for the scenario. The workbench now is occupied by larger caliber anti-tank guns and kubelwagens. Stay safe out there, and I hope to see you all around the gaming table at some point in the future.
Posted by Dusty at 10:06 AM

Great scratch builds! Later war versions of those guns are available, but as you say it makes little sense to have them on a standard game table, and scratch building produced some great results.

Those look great, Frederick. Nice scratch-building skills on display there. Really looking forward to the game!