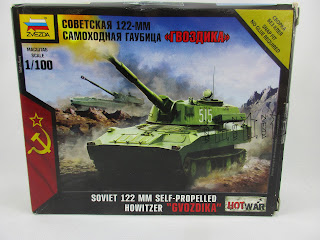 I got a real surprise in the mail a couple days ago. Back in early July I'd ordered some Zvezda models from Evgeniy, a Russian eBay vendor. By late September it seemed clear that the models were lost and weren't going to arrive, so I sought and received a refund from eBay - at the same time promising Evgeniy that if the models ever did show up, I'd pay him again for them.

And can you believe it - they finally did show up - three 15mm (1:100) 2S1 "Carnation" 122mm SP howitzers. They're push-fit models that go up very quickly, but of course have the standard drawbacks of push-fit models - they can be a bit fragile in assembly. (Yes I did send money to Evgeniy for which he expressed deep gratitude) 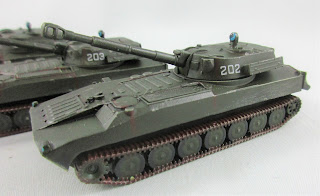 The models themselves are reasonably detailed and paint up quickly. The surface detail takes well to the standard Magic Russian Spraycan + Agrax Earthshade + Ushabti Bone drybrush. 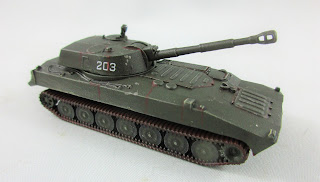 I added some weathering with Doombull Brown rust marks and Leadbelcher chips, plus some spare Team Yankee Russian decals of course. 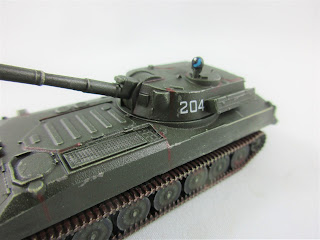 In terms of cost, the three vehicle kits cost me $21.70 USD including shipping from Russia. This compares favorably with the Battlefront box, which tallies at $41.50 USD (before shipping) but includes unit cards. The battlefront models are resin and metal multimedia kits which you may prefer, or not, to injection-molded plastic kits. The barrels on the Zvezda models can be elevated though, unlike the Battlefront resin. Delivery from Battlefront may or may not be speedier and more reliable than Russian post... 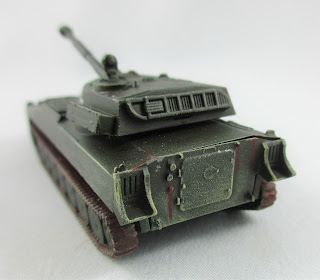 The Zvezda kits will be perfectly useable when if we can ever have games again. Game stats for the models are included in the current Red Thunder book and the forthcoming Soviet army book, of course. Let me just say that an artillery template combined with direct fire anti-tank capability (a very respectable AT21 at up to 24") can come in quite handy.
So that's another Soviet unit for the shelf. Hope everyone is staying healthy and sane.
Posted by Dallas at 1:43 PM

Fantastic work on these heavy hitters Dallas - they look like beauties.

Always nice when the lost package finds a way to show up...

They look great! I guess the package took the world tour!