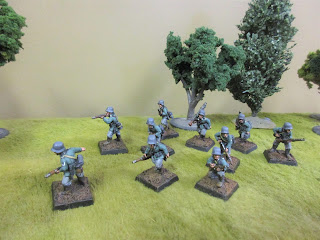 In preparation for Conscript Frederick's planned "Assault on the Danzig Post Office" game, I've painted some Foundry models that had been sitting in the lead pile here at Conscript Towers for some time. 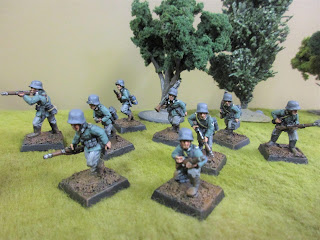 Foundry had a brief flirtation with WW2 subjects some time ago and I think I've bought and painted the great majority of models they produced... they made British Home Guard (check), Paratroopers (check), Chindits, and Commandos (check) and some French partisans (check), as well as German Fallschirmjaeger (check) and these humble Heer infantrymen. OK, so I don't have any Chindits... sue me. 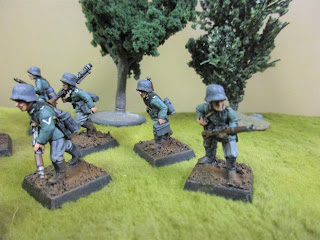 The sculpts are just excellent, in my opinion. Nothing over-the-top or outlandish, just basic early war troops. The only criticism I have about them is the "interesting" array of field gear... half of these guys aren't carrying breadbags or entrenching tools... some of them don't even have water bottles (!). But all of them are carrying their faithful gas mask canisters at least, with one exception noted near the end of the post. 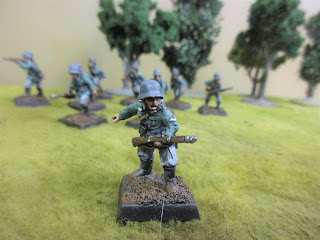 I guess another small niggle is that the sections don't come with a leader carrying the ubiquitous MP40 - they have to make do with a Kar98k just like the rest of the lads. Fortunately for the upcoming game I can press the third crewman from the Lafette MG34 teams (again, see below) into service to lead the infantry sections. 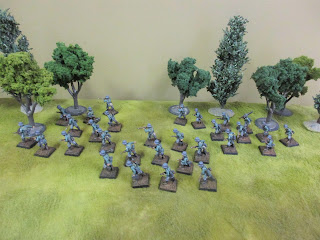 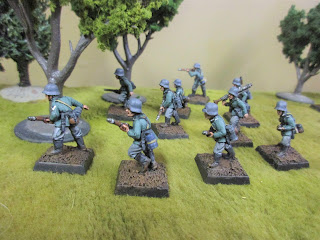 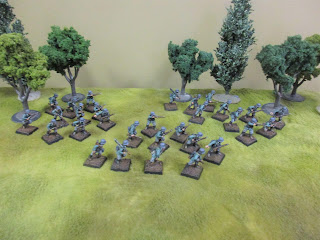 Kehrt um! Everybody run back the way you came... 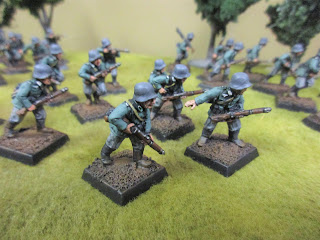 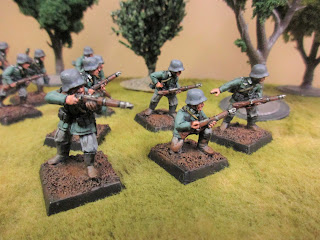 Lovely detail on the sculpts. 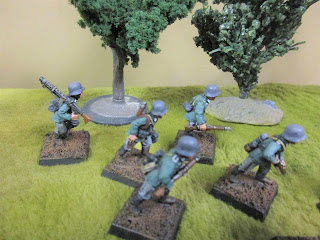 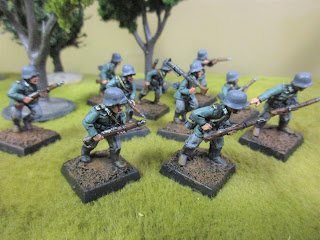 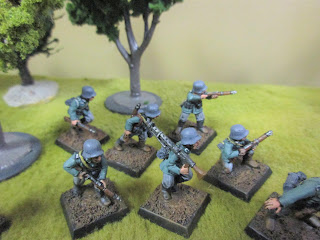 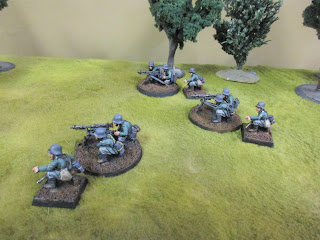 I also had three MG34 on Lafette mounts to paint in this batch. That's a lot of lead headed downrange. 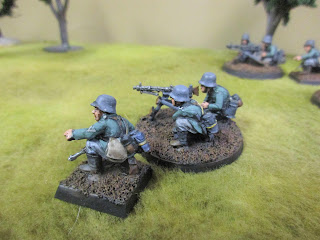 The third crewman is armed with an MP40 and will serve as an infantry section leader where necessary. 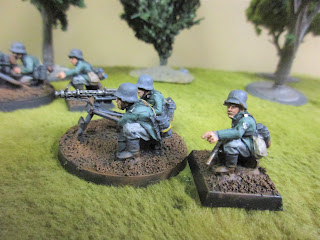 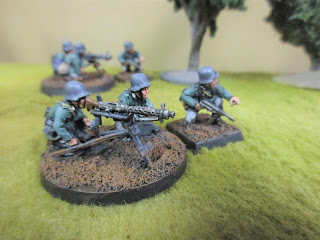 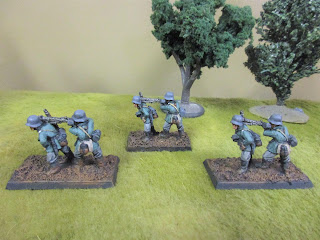 I also made up three of these MG34 teams, using Foundry's "Heavy Weapons" pack. These chaps would normally be firing their MG34 from an AA mount but how often do you see one of those on the game table? So I improvised the infamous "future hearing damage" pose so often seen in period photos. 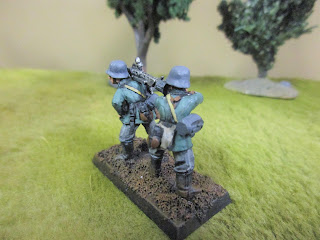 Strangely, although the web strap was sculpted onto the gunner, there was no gas mask canister to accompany it. This bugged me so I ended up sculpting one from scratch. Well, not from scratch exactly... I found an appropriate piece of round sprue scrap, cut it to length, and glued it in place. Then I covered it with a thin layer of greenstuff and sculpted in the corrugations and lid, as well as a strap. Not pretty by any means but gets the job done. 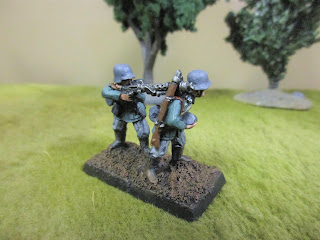 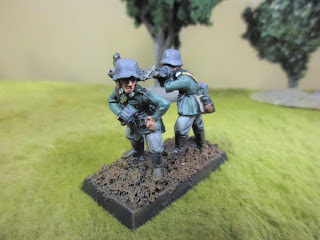 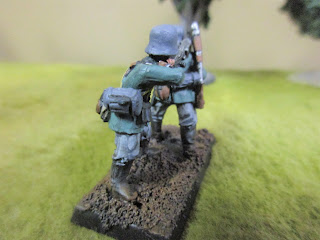 Painting formula for these chaps was Mechanicus Standard Grey for the helmets, gas mask cans and trousers (the latter highlighted heavily with Administratum Grey), Mournfang Brown and Leadbelcher for the rifles, MFB again for e-tool handles and canteen covers, some yellowish tan for the web straps, off-whitish colour for the breadbags (washed with Agrax Earthshade), Vallejo Dark Rubber for black highlights, and Vallejo German Uniform for the tunics. Most of the model was then washed with Nuln Oil and basecoats reapplied as a highlight. Done. 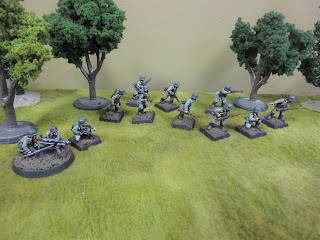 Here's some I did earlier... like maybe 15 years ago or more! This fills out the platoon nicely, together with some officer-types I also had done before. And although these are Heer models, they'll stand in OK for the Waffen-SS (or I guess it was technically "SS-VT" at the time) "SS-Heimwehr Danzig" troops in Frederick's scenario.

Hope everyone is keeping safe and sane!
Posted by Dallas at 5:14 PM

Great work Dallas - it is too bad Foundry only sort-of-flirted with WW2. Even with the oddities and challenges you mention, these metal castings are still so much nicer than any of the plastics out there today.

Great work Dallas! I like seeing the early war uniform getting some press.