Some more 10mm Franco-Prussian War work to share. This has been a fun project to come back to this year, but much of my work in this setting and scale has been focused on the Prussian forces and their allies. It is time to get some more French troops on to the table! So here are two units of French infantry in 10mm - a unit of regular line infantry, and unit a Zouaves. The figures are from Pendraken.

I have said it before, and I will say it again...the uniforms from the French army of this period are just magnificent, no matter what scale of miniature you are working with, and the castings from Pendraken are just tremendous quality.

There are different rules which can be used, so the unit representations can scale up or down...in my case, I hope to use each base to represent one battalion, so the three bases together would comprise an individual regiment.

Even in 10mm, the fantastical uniforms of the French Zouaves really pop - I just love them. There were a few regiments of Zouaves in Patrice MacMahon's I Corps, which was stationed in Alsace at the outset of the Franco-Prussian war in the summer of 1870. Thus Zouaves and Turcos are notable in some of the preliminary engagements of the war which were fought in that region.

My 10mm collection to this point has focused on preparing for the Battle of Wissembourg, one of the very first battles in the Franco-Prussian War. The French were caught by surprise and heavily outnumbered in that engagement - therefore my 10mm forces contain very few French units (as opposed to two divisions of Prussians and a division of Bavarians). The two units of infantry seen here thus represent a substantial reinforcement for the French! 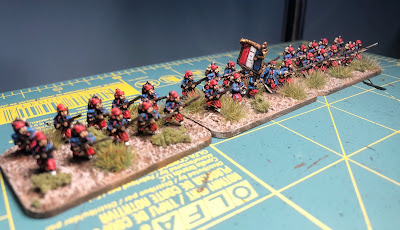 As the COVID situation continues to swirl, I really have no idea when or how I will get these on to the table, but my interest in the period remains undimmed, and I have some more French units lined up in the painting queue...even if it has to be over Zoom, we'll try some kind of game at some point. In the meantime, I hope you are somewhere safe, and able to stay healthy and sane and stocked up on hobby projects.

You are right- those uniforms really pop. Those look like very nicely sculpted figures.

Those are fantastic, so much detail in 10mm
Cheers
Stu

Fine work again Greg! Really enjoy your exploits into this period, no matter the scale. You obviously need some more Bavarians though