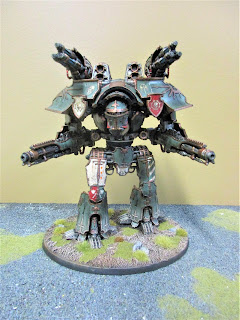 Reinforcements for Legio Krytos have arrived in the form of a Warlord Titan... just got this one finished over the weekend. It's an awesome model and actually wasn't as much of a headache to assemble as I imagined it might be. The Warlord is set up for the initial photos with Laser Blasters up top and Volcano Cannons. Let's look at it in detail... 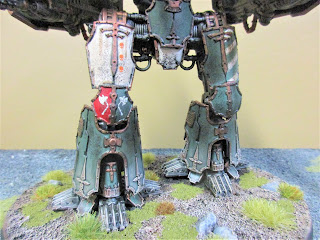 As I said, assembly was pretty straightforward. It's always a bit of a crapshoot putting the legs and hips together. It can be tough to ensure that things line up and that when you attach the torso, it's not cocked in a different and unexpected direction. Fortunately with this build I just set up one of the legs "in stride" and everything else lined up OK. 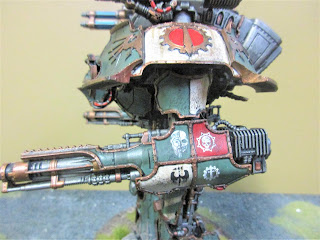 There's lots of room for heraldry on the Volcano Cannon shielding. I used some decals from the Legio Krytos sheet to fill it up. 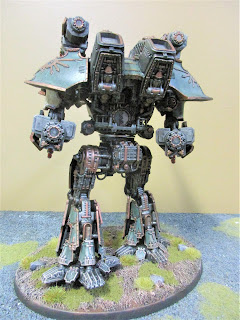 Rear view of the Titan. 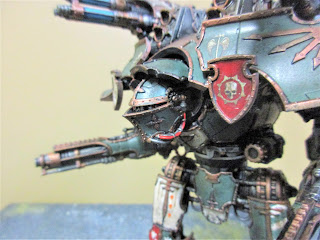 I really weathered the Hell out of this one with the sponge chipping. Had to buy a new bottle of Vallejo German Uniform to do the green. I was worried because the colour of the bottle was quite different to that of my old bottle - but I needn't have been concerned, the match was great. 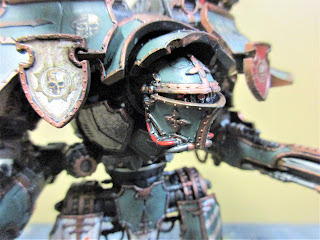 It's certainly fiddly painting those "eyes" inside the "helmet". Probably would be a good idea to do those before assembly. 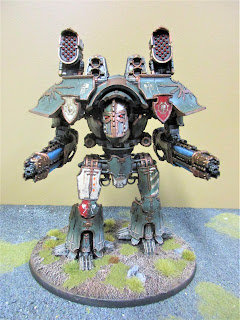 A quick switch of weapons configuration to Plasma Annihilators and Apocalypse Missile Launchers. The standard kit comes with Apocs and Volcano Cannons of course - the alternate weapons (as well as alternate head shown here, and the Arioch Power Claw) come on a sprue available from GW separately. 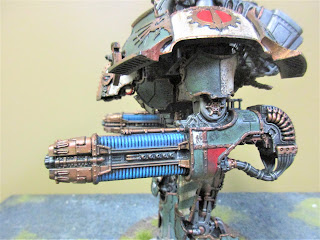 Good view of the Plasma Annihilator. I should add that the kit is super-easy to magnetize - all of the weapon mounts are set up for 5x1mm magnets. 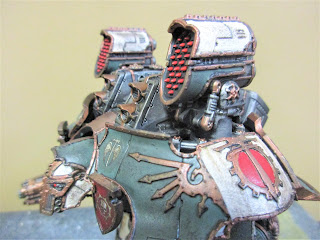 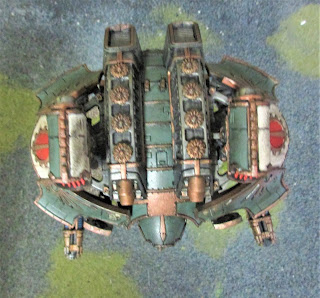 Top view of the Titan. 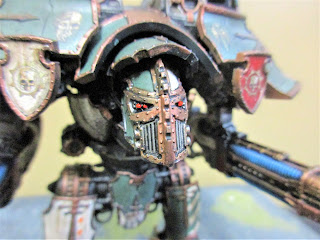 Here's a good view of the alternate head. I magnetized both so it's easy to swap back and forth. Honestly I'm not sure which I prefer. 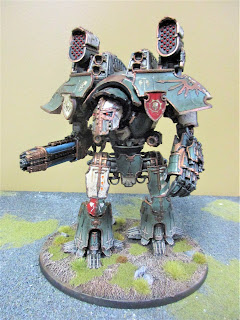 The last weapon choice is one I'll not likely often use - the Arioch Power Claw. Yikes! 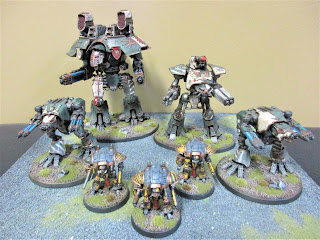 Here's the gang so far. Hoping to get either another Reaver or a second Warlord done before the New Year. Might have to start on the Warlord as the Reaver's missing its base, which hasn't yet arrived from the eBay vendor. I'll certainly paint more of the armour panels separately on my next Warlord - the ones around the "shoulders" made things kind of awkward to get to. I'll also magnetize the torso somewhat differently. On this build I attached a steel washer to the "hip" and disc magnets to the "torso". I'll do the same on the next one, just a bit more neatly.
Posted by Dallas at 10:42 AM

Great work Dallas, congrats on getting this one finished! Your Titan battlegroup is looking fantastic, can't wait to see them deploy on the table for a scrap!

Fantastic result and nice modelling to allow the different choices of weapons.

What a monster, great job!