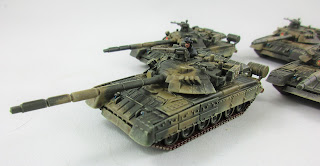 Anyway, I've now assembled and painted the T-80s and BMP-3s as part of continuing Soviet escalation. Both models are simple and straightforward to assemble, as usual from Battlefront. I basecoated the T-80s with Krylon camo spray (a can bought on eBay arrived last last week) and applied a camo pattern with stippled Zandri Dust. As usual the vehicle was washed with Agrax Earthshade and lenses picked out after that. Decals were applied to the turret and some Ushabti Bone applied - done. As these vehicles are the Soviets' latest and greatest I didn't do any significant weathering. They're fresh to the front. 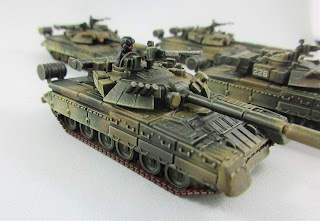 And wow - the game stats for these beasts are staggering. Not only are they equipped with an excellent 125mm main gun with an Anti-Tank rating of 22 and Firepower 2+, they can also deploy an optional AT-11 "Sniper" ATGM, also with AT of 22. The Sniper also incorporates an ERA-defeating tandem warhead. Both weapon systems can be fired on the move. 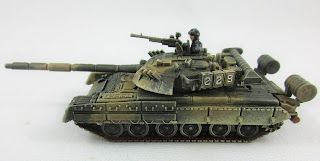 The T-80's armour package also represents a significant upgrade over the T-64, with front armour of 20 and explosive reactive components that upgrade side armour to 16 versus HEAT munitions. 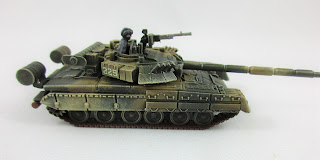 They're certainly not cheap though, at around 8 points each. 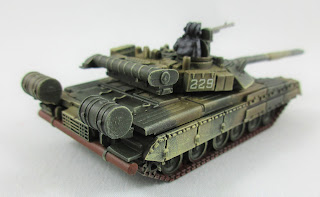 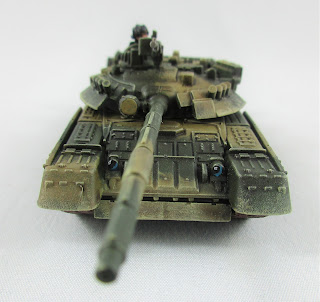 I'm no expert on Soviet armour, but from what I've read a consensus appears to be that the T-80's game stats may be somewhat optimistic when compared to reality. However, I can certainly see Battlefront's point in doing this - presumably not all Soviet players want to always field hordes of T-72s or T-64s, and upgrading the T-80 gives them a viable option to field against Leopard IIs and Chieftains/Challengers in a non-horde list. This is OK by me, as after all, it's just a game. 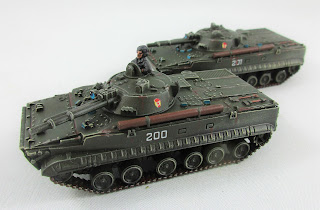 The other new vehicle model included in the box is the BMP-3. This recon vehicle brings some neat capability to the table as well. 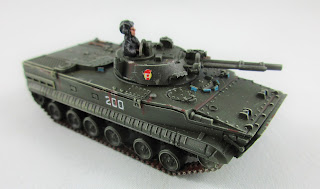 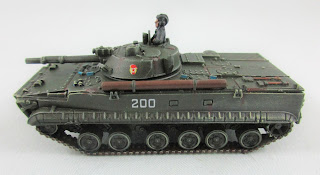 The two BMP-3s in the box were also basecoated with Magic Spray and weathered with some watered-down Doombull Brown rust streaks and Leadbelcher chips. 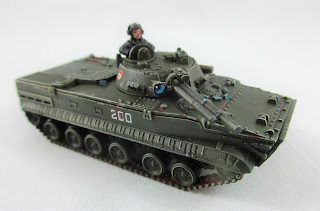 Generous amounts of crew were provided in the box as well - but no decals. However if you're a regular purchaser of Soviet Team Yankee models you'll no doubt have plenty of spares on hand. 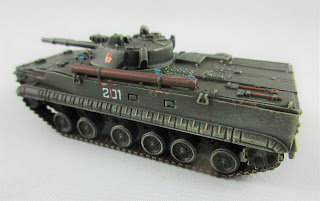 The BMP-3s have some very clever antenna mounts cast into the turret (I think they would just fit broom straws perfectly) but I haven't decided yet whether to employ them. 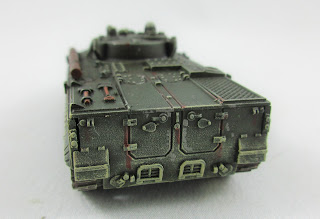 Great detail on the BMP-3 as with all Team Yankee plastics! Like the T-80, it seems that Battlefront has prioritized bringing out some new toys for the Soviets despite thin historical evidence for their use...  while it supposedly entered service in 1987, the BMP-3 only broke cover in deployment with the Soviets in 1990. I guess that's close enough to our time period.
Anyway I hope you enjoyed the post. Get out there and grab the new Team Yankee starter box if you want to be the first on your block to get the new Soviet goodies... I got mine from Tista Minis in Hamilton, Ontario.
Posted by Dallas at 10:49 AM

Great looking armour Dallas! Those vehicles looks great, can't wait to get moving on some myself.