More ships for the Executioners

I posted some ships I painted for Battle fleet Gothic back in October. One of the fleets belonged to the Executioners Space Marine Chapter during the Badab War. In the background, the Executioners had a seized (stolen) cruiser called the "Night Hag." It's described as having an assortment of weapons including lance batteries, launch bays and Macrocannons! Whatever those are. I found an interesting model on Shapeways that had a fairly unique, yet still Imperial look. It also had this weird cannon on top of it. I also ordered a Strike Cruiser to make the fleet look more space marine-y. Once arrived I added a set of lance batteries to the Night Hag and painted it up using the blue gunmetal color scheme I used for the other ones. The chapter insignia was again borrowed from the double axe transfer from Imperial Fist Forgeworld transfer sheet.For rules I will probably make it one of the battleships from the Armada expansion. Rumors that GW may relaunch BFG may rendered my efforts here obsolete. It's definitely a game I would purchase despite what I'm sure will be at an eye-watering price. Hopefully they don't change the scale too much.

I have two fleets now and had anticipated that we would be playing games soon. However, Winnipeg is now now entering a second lockdown and authorities are promising to take a hard line on violators of the Public Health order. With news that the virus is surging all over Europe and North America, I am not hopeful that we will be gaming any time soon. In the meantime, I'll keep plugging away at my stockpile of models in anticipation of the day we can resume in person gaming. 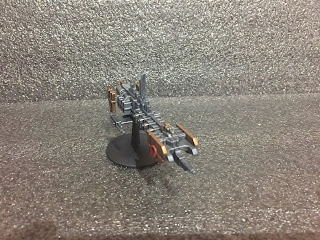 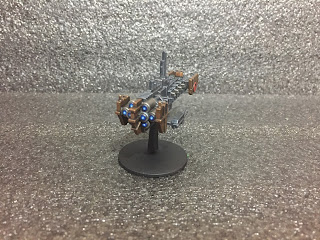 Oh wow - this is so cool! Great work Mike - and I love that the "Night Hag" is a thing...I need to look more into the Badab War.

The prow on the Night Hag looks fantastic and you can't tell its 3d printed, it doesn't seem to suffer the grainy texture that some prints have. Good job!