A project that developed out of the Bolt Action scenario for the attack on the Polish Post Office in Danzig is the Steyr ADGZ armoured cars used by the SS Heimwehr Danzig. I have come across a few blogs and videos on YouTube where gamers have just substituted some other German armoured car for the Steyrs, but that just doesn't cut it in the Conscripts.

The Steyr armoured car was developed in Austria in 1934 and used by their army and police force prior to Anschluss, They had a very distinctive look in that they are almost symmetrical front to rear. In fact, they had two drivers, one facing forward and the other rearward, so the vehicle can drive in either direction at full speed. The SS bought a number of them, some of which were used in Danzig. Later in the war, they were used in anti-partisan operations in the Balkans. 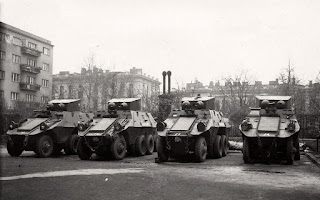 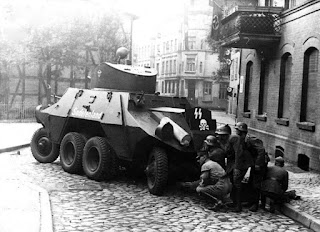 At the moment the only sources of Steyrs in 1/56 scale are on 3D sites like Shapeways, but those can be rather pricey once shipping is included. As luck would have it, a friend of mine had recently acquired a 3D printer, and he was interested in trying something different. He purchased a file for printing the armoured car online and, after some necessary modifications, printed off two for me for the total cost of $15, which included the cost of the file.

They assembled fairly easily, with some sanding here and there, and drilling out the holes in the wheels a bit larger so they would fit on the axles. 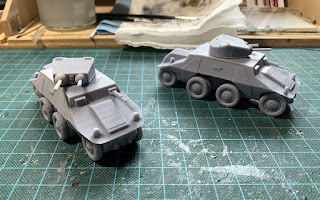 They were painted a basic early war Panzer grey, which was straightforward enough, but then came the problem of finding appropriate decals. The Steyr armoured cars used by the SS Heimwehr Danzig bore rather unique markings such as SS runes and skulls, but also names of various German territories that were viewed by the Nazis as 'belonging to the Reich' such as 'Ostmark', 'Sudetenland', and 'Memelland'. Again, while kits and decal sets for the Steyr exist in 1/72 and 1/35, they do not in 1/56. 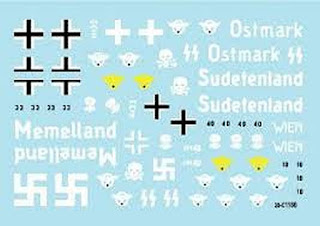 Not having the ability of print water transfer decals, I resorted to printing them on paper with a laser printer. I started with the image above, changed the colour of the background to match the grey of the vehicles, and printed it off. I then cut out the parts that I wanted, sanded the backs to make the paper thinner, and glued them on the model with PVA. I am pretty pleased with how they turned out. 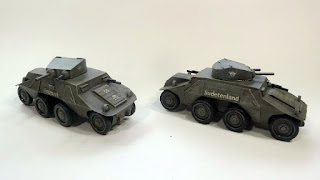 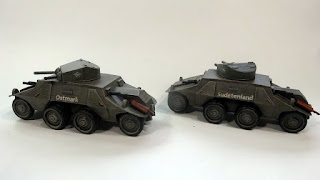 The next step is the construction of the Polish Post Office that will take center stage on the wargames table. More to follow.

An interesting project!
Though colour wise, these were painted in the dark police green that quite a few SS vehicles used before and during the early years of the war.

Thanks for the info on the vehicle colour. After reading your comment I went looking for more colour images online and did find a few models that had been painted green. If I do any more, I will be sure to painted them that colour.

My pleasure. I only found out about the police green a few years back and was quite surprised back then. This seems to have stemmed from the integration of the SS into the security appartus and the police force. Himmler was chief of police for the Reich, if I remember correctly. Sometimes the colour can be seen on the few colour photographs from Barbarossa, on motorcycles for instance.

Anyways, they look great as they are! Plus the ones they later used, were at times painted grey.