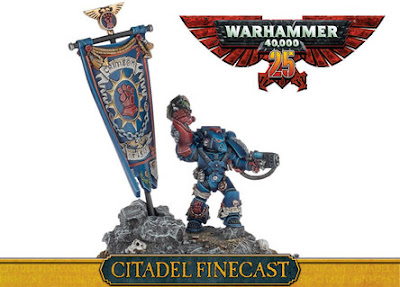 This past weekend was the 25th anniversary of the game that I play the most, Warhammer 40,000.

The local Games Workshop store participated in the anniversary, hosting events such as a speed painting contest and an Apocalypse game. It was a good day to catch up with fellow hobbysists, meet new people, talk modeling and gaming, and reminisce.

Conscript KevinH and myself each pre-ordered the fig. I think that it's a beautiful sculpt, capturing the lines of the classic models. It will make a great objective marker for my games. Kevin also painted a very cool Crimson Fists Terminator test model, a photo of which is located here.

Kevin and I have both been playing 40K since the beginning. It's been a bit of a rollercoaster ride over the years, what with the various editions of the game and some, shall we say, uninspired game design choices. Does anyone remember the RT-era Vehicle Manual with its clear targeting grid? Talk about stopping the game and bringing you "out of the moment".

Admittedly, the 40K rules mechanism itself is somewhat old-fashioned. IGO-UGO? Rulers and tape measures are good things? Seriously? IIRC, games like Crossfire did away with such impedimentia back in the mid-90's. Still and all, 40K provides a fun, cinematic tabletop experience for gamers throughout the world. This is due partly to the interesting background fluff provided in the game materials and the Black Library fiction. Also, it is due in no small part to the various communities that have grown up and matured over the last quarter century, supporting the 40K hobby in its various incarnations: tournament play (like 40Kegger, Astronomi-con, Mechani-Kon, and AdeptiCon), miniature painting sites (CoolMiniOrNot), online community forums (Bolter & Chainsword, Warseer), numerous 40K related blogs, and a multitude of small, unheralded gaming groups that constitute maybe the bulk of the gaming populace.

Rumour has it that the 6th(!) edition of the 40K rules will be coming out sometime in the summer. Time will tell whether this is a good thing or not. I have actually liked the codices that have come out in the last few years, so here's hoping for some more balanced armies and clean rules.

As I indicated above, MarkG, the manager of the local GW store, had organized an Apocalypse game. There's no real balance to such an affair, what with the appearance of super-heavy vehicles and gargantuan creatures. The theme of the day's scrap was "Good" versus "Evil", with a 1500-point limit per participant. Accordingly, I brought my modified 1000-point 40Kegger list, with the addition of a Scorpion Super-Heavy Grav Tank. 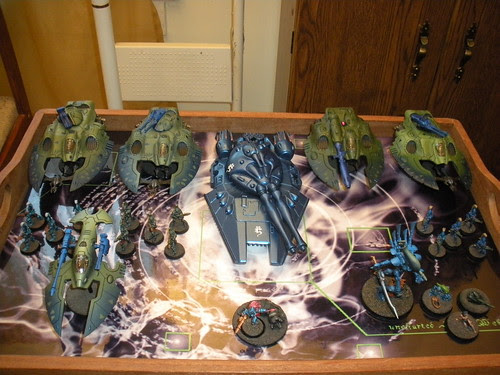 The Scorpion was proxied by my old Armorcast Tempest. There's no longer any rules for the Tempest, which is a close fit to the Scorpion, since both are armed with turreted TL-Pulsars. 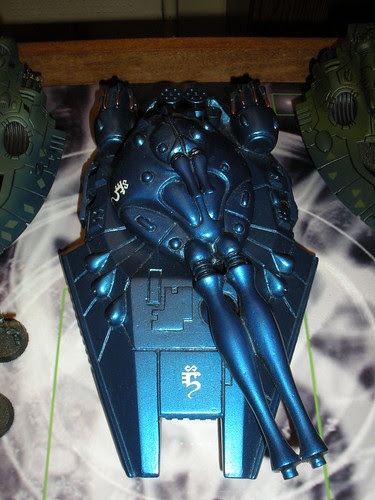 Both sides bid the maximum time, to try and go second. The Good side lost the resulting tiebreaker die roll and set up first, deploying about half our forces in a shallow line from west to east, both flanks anchored with pairs of Blood Angels Dreadnoughts, with heavy weapons teams and two super-heavy tanks in the southeast third of the table, along with the Wraithlord, some Marine characters, and a Predator tank. We also spread out lots of barbed wire and minefields throughout No-Man's Land, to try and channel the enemy infantry.

The photo below is taken from the western table edge, looking east. 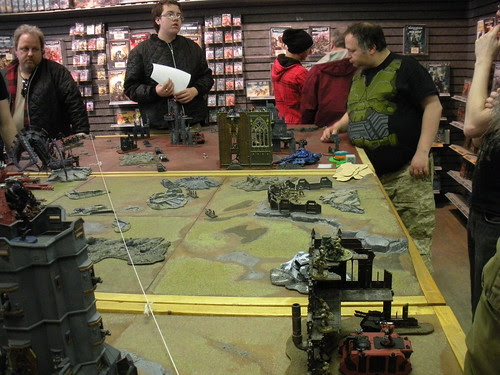 The forces to the southeast: 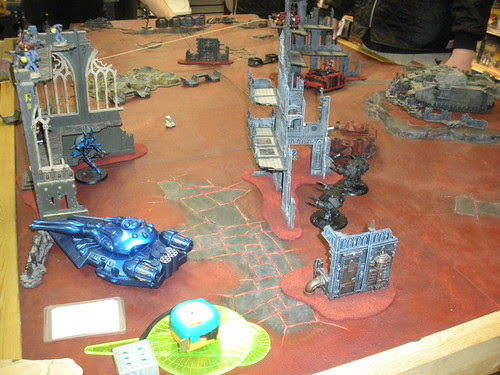 Three loaded IG Valkyries, a SW Land Raider full of troops, BA Terminators, and the bulk of the Eldar skimmers were held in strategic reserve.

The Evil side set up, from west to east, some Chaos Marines in the bunker and in the ruined buildings, a big Ork mob of Kans led by a Stompa, and a Heirophant Bio-Titan. A couple of Tyranid Zoenthropes anchored each end of the line. Various Daemons, Chaos Marines, the Doom of Malantai, and a 120+ strong Green Tide of Orks were left in reserve. 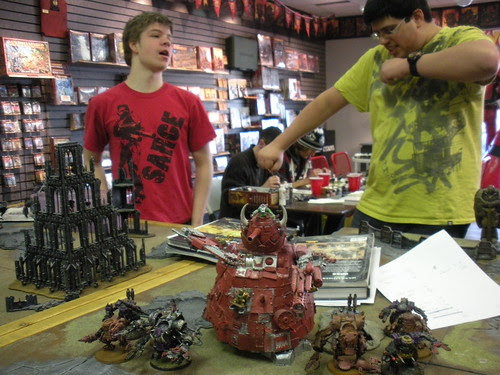 The Heirophant is a 10-wound, Toughness 9 monster that's larger than a building. Yikes! 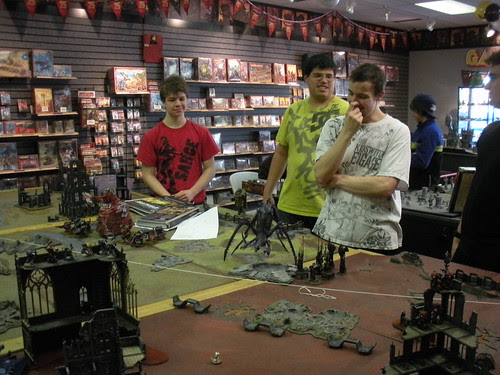 The Good side fired at the Heirophant and the Stompa, infliting 1 wound and a drive hit, respectively.

The Evil side made a general advance, killing the Wraithlord with fire.

Hilariously, the Edmonton GW store telephoned in a random orbital strike onto the center of the table, inflicting some damage on the Kans. Below, Mark takes a photo commemorating the strike. The Winnipeg store subsequently returned the favour... 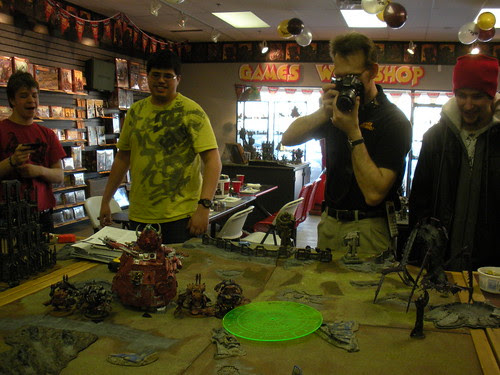 Some Daemons had teleported within the southeast corner. They were gunned down by close range firepower and a Rune Priest's psychic ability. The two Zoenthropes also fell to Marine missile launchers. 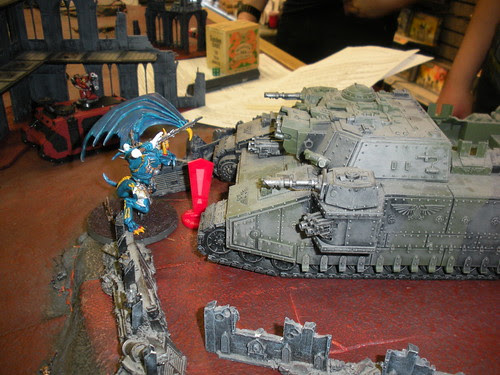 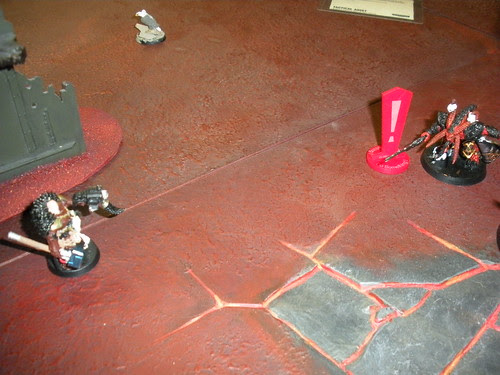 A dying Daemon managed to drop a Vortex Grenade, which stayed on the table to cause havoc. It was scary, but didn't end up doing anything of significance. 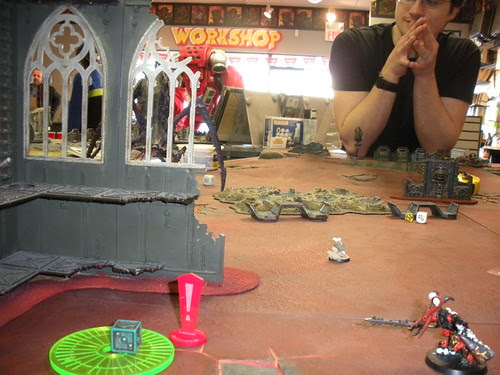 The Blood Angels Terminators teleported in the middle of the cluster of buildings in the northwest, setting up a next turn charge against the Chaos troops holding an objective.

In the centre, the Stompa was immobilized by the Scorpion, halting the advance of the Kans if they wanted to stay inside its Force Field.

To the far west, the platoon of infantry mounted in three Valkyries can be seen to have arrived onto the table, trying to control the westernmost objective. 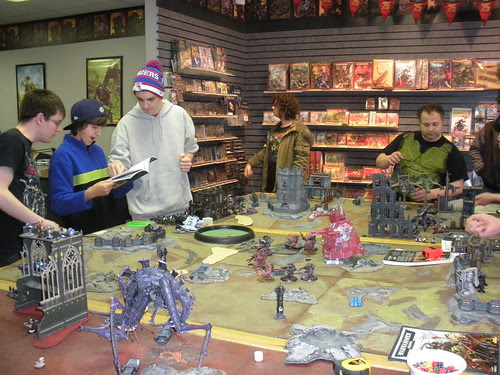 In response, the Doom of Malantai deep struck and the Ork Green Tide used a Flank March to come in on the whole western half of the table, destroying some Guardsmen, some Marines, a Rhino, and a couple of Dreadnoughts. Things were starting to look bad for the side of Good. 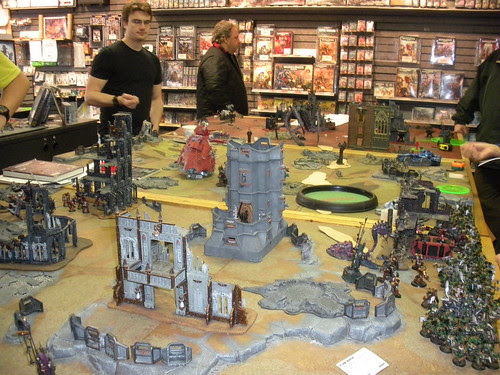 To the east, the bug Bio-Titan kept moving, unperturbed by the volume of fire directed at it. 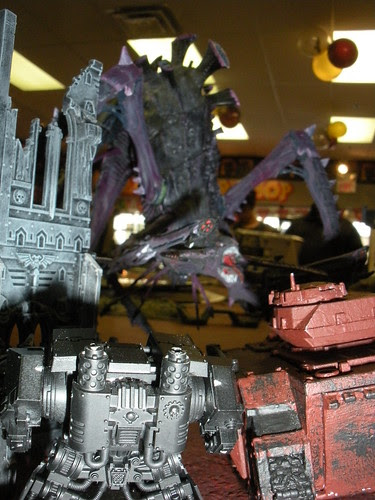 Concentrated Evil fire ended up immobilizing the Scorpion and blowing off its main guns. 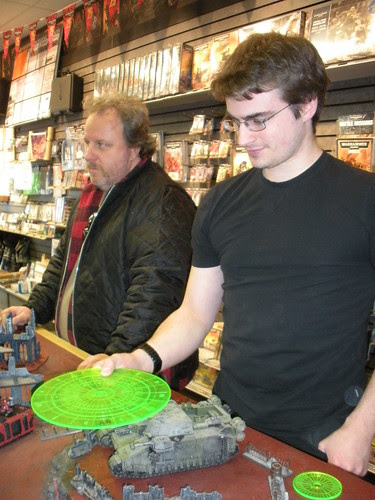 The rest of the Good reserves were finally committed, with three of the Eldar skimmers coming on in the southeast, taking control of the objective there, as a BA Dreadnought finished off a small squad of flank-marching Chaos Marines. To the west, the Warp Hunter and Fire Dragons supported an assault by the Space Wolves from their Land Raider.

The Doom of Malantai was killed by the Dragons, the Terminators cleaned out the buildings to the northwest, and a LOT of casualties were inflicted on the Green Tide (the Warp Hunter alone killed 17 Orks with an Aether Rift). That STILL left over 70 Orks in the mob...

...who proceeded to kill off the Space Wolves assault squad, pull the gun off the Warp Hunter, and wipe out the Fire Dragons, leaving the Autarch to yell defiance from the wreckage of her destoyed Wave Serpent. Nearby, some allied Blood Angels wish her "good luck". 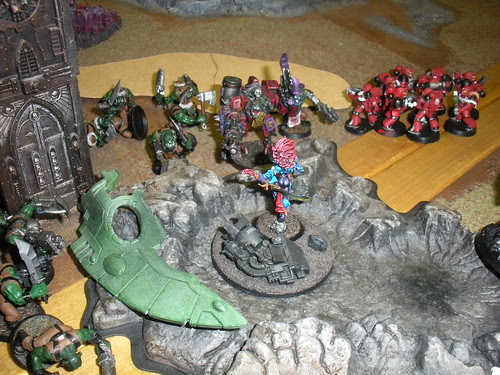 Surprisingly, the Evil side's steady advance was not enough; they had lost control of the one objective they held in the northwest. In the southwest, the objective nearest the Ork Green Tide was contested by Good forces. The Valkyrie-borne Imperial Guard controlled an objective to the far west. 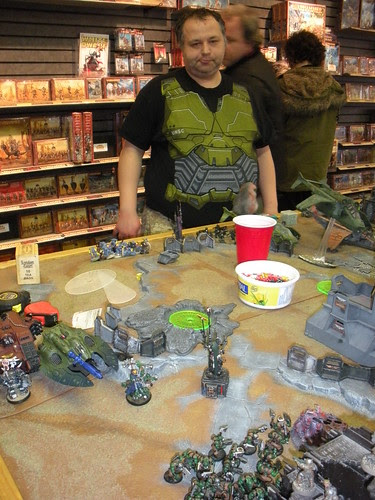 In the southeast, despite taking a lot of hits from the Bio-Titan, Good forces managed to retain control of another objective. 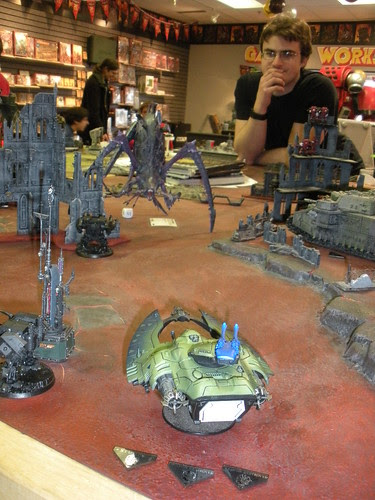 All in all, it was a fun game, only slowed down by the enormous close combat in the southwest half of the table. I also liked the random orbital artillery strikes. Those were something no-one could really plan for, adding a certain fog of war to the affair.

When 40K first came out, I would have never guessed at its present level of popularity. To me it was just another game for me and my friends to play, like the classic versions of Traveller or Dungeons & Dragons. (Yes, I am that old.)

The current state of 40K is interesting. It is the most played game GW makes. GW is the dominant company in the miniature wargaming hobby. You can generally find an opponent to play in many major centres in the world. However, 40K and GW have competitors for our hard earned dollars. Companies like Privateer Press and Battlefront Miniatures make competing miniatures games that are well-supported by their own communities. Various homebrew rules are still written and played, since it is in the nature of a lot of gamers to tinker, and the possibilities of miniatures gaming are many and varied.

GW's business, and mini-gaming in general, is dwarfed by more generally accepted activities like computer console gaming. Despite its recent success, mini-gaming is still a relatively niche pastime. It will be interesting to watch the future changes in both GW and 40K.
Posted by DaveV at 5:48 PM

Interesting also to note that the limited edition schwag that was sold on Saturday has already appeared on the "secondary market"... eBay sellers are asking $60-80 for the LE model, and even the $5 poster is being bid up over $30... yikes.

Great analysis of the state of 40k within the wargames community. I really hope they use this 25 year mark to make some progressive changes to 40k.

Dallas, on the basis of your comment I went down to the GW store and picked up one of the few remaining posters, for $5. I'm getting it mounted at a local framing shop.

J.P., thanks. I hope 6th edition turns out to be good. I saw that leaked version from January. It's kind of too bad that version isn't the one to be published. There are some interesting ideas there.

It would be cool if GW just changed the basic structure of the game: unit-based activation, more free-form movement, or something to bring the game into the 21st century.

Another option would be to bring back a referee or GM, as was the norm in Rogue Trader. Maybe even have the option of computer moderation. "Free Kriegspiel" rules used by military men in the 19th century eliminated most calculations and die rolling in favor of an umpire who would determine results based on the situation and his own combat experience...