I'm happy to have another 28mm Austrian unit off the painting line and ready for the firing line. This unit will represent a battalion of IR#23 "Salzburg".  The models are all from Wargames Foundry. They will see action this weekend in Regina, part of a last stand on the Pratzen Heights in 1805 at the Battle of Austerlitz.  Of course that engagement was total pants for the Austrians, so I'm pretty sure I know how that will turn out, but hearing this back story, I wanted to try and come up with a unit that would reflect that story a little bit. I thought a firing line might be the way to go.

This is my first ever unit in a firing pose.  Unfortunately Foundry's range lacks variety within any categories, so there were no loading/standing models to mix into the group, but I was still happy with how the unit turned out overall.  In this case the monopose reinforces the feeling of imminent volley fire (which the French will ignore and charge right through, but anyway).
At 32 "spots", this unit is smaller than my previous Austrian units (which had 40 "spots").  The oversize Austrian battalions are well-established assumption of many gamers, but I suspect that there were many more "regular" sized units in the field, and this will be one of them.  I have also provided them with only a single standard bearer to represent it as a less-senior battalion in the regiment.

The officers really stand out well in this unit - the mounted officer is set to be riding along "behind the line", and the screaming fellow on foot is barking out the instructions.  I thought they worked well together on the same base.  They know the battle is going pear-shaped, and if they can just hold here, maybe the defeat can be reversed...

The mounted officer is actually from Foundry's Hungarian infantry selection, but thankfully the differences between the Hungarian and German officers are subtle enough (or at least subtle enough for most non-TMP obsessives) that a little bit of paint can cover the difference. Just paint the pants white and you're set.

To add a little colour I put a charging trooper beside the colour-bearer.  He knows the musket volley will not stop the French, and is ready to protect the colours when they charge home. 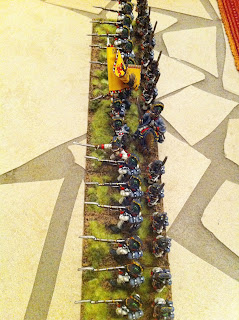 This makes for a total of seven infantry battalions (6 line units and 1 Grenz unit) in my 28mm Austrian force.  Getting a little closer to a proper column.  They will be run over by Curt's French superstars this weekend, but will hopefully take a few of Napoleon's lackeys with them as they go down in flames...

Beautiful stuff, Greg. Can't wait to see these boys all arrayed on the table this weekend!

It's cool to see a firing line of infantry, too.

Hi Greg there are a for different colour variations for the camo is there one that you are after, if you drop me an email which you can find on my blog i will give you my colours for how i did mine.