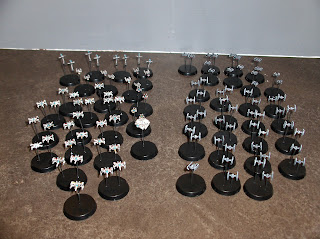 Further to a recent thread on TMP, I've been considering rebasing my Star Wars "fleet scale" fighters. With the arrival of a shed-load of bases, the stage was set for a wholesale re-do...

I decided to base the "heroic" ships (Luke's X-Wing, Vader's TIE Advanced, and the Millennium Falcon) as singles, and the rest of the fighters in pairs. I did give this a bit of thought, since it represented a change from the previous basing style of three per base. I decided to go with two per base for a couple of reasons: it better represents a leader and wingman if we play a smaller scale game with each model representing one ship; and it gives me 50% more bases of fighters if we play a higher level game. The bases are simple 25mm rounds and can easily represent a squadron in a fleet-scale game. 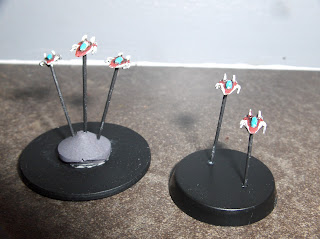 Old style vs. new style. I think that the new way is much cleaner looking. I simply clipped off a few millimeters randomly from the bottom of each pin and glued it into a hole drilled into the new plastic base. The final thing I may do, if the spirit moves me, is to get some magnetic sheet to stick on the bottom of the bases, for a bit of heft as well as ease of storage.
Posted by Dallas at 9:51 AM

I based my fleet scale fighters 3-4 to a base on 20mm squares, because that matched the counters from BFG... then like most of my projects, I put them in a box and have not touched them in years.

Very nice. I reckon thats a good call on the two-to-a-base decision.

Great stuff Dallas.
Time to roll out the huge Star Destroyer for some fun.

Very cool! Love seeing the Falcon in this scale.

The new style is definitely cleaner and more economical....

Nice to see some fleet based coverage from the conscripts. Here is a worthy blog to check out if space fleets are your fancy.