"Hoth?! They Should Have Called It 'Colth'" Battle Report 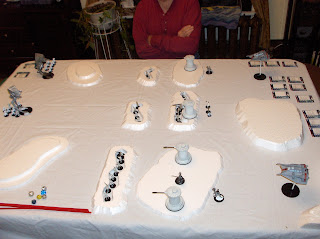 Last night the lads came by for the regular Thursday game - I set up a "Star Wars Miniature Battles" game of the Battle of Hoth. Imperial forces (commanded by Conscripts Greg, Brian and Cam) consisted of three AT-STs (with an attached AT-AT driver who's lost his ride), three squads of seven Snowtroopers each lead by an Elite Snowtrooper, an E-web Blaster, Holo Veers, Darth Vader, and a small command group of Snowtroopers. The Rebel defenders (Conscripts Frederick, Wes and Perry) had Leia, Luke and Han, 3PO and R2, along with three sections of five Rebel Troopers, each with either an Elite Trooper or Rebel Officer, two heavy blasters, an ATGAR cannon, four defence turrets and two Snowspeeders. The game was set up on a 6x4 table with the Rebel defences in the middle two feet. The Imperial objective was to have at least one infantry section in the Rebel rear area by the end of turn 8. The Imperial infantry could also "recycle" if destroyed, entering from their own table edge. 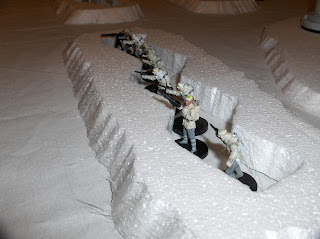 I had made some terrain for the game that I wanted to try out. The Rebel "trenches" are white foam carved to shape with a hot wire foam cutter. Turned out pretty nice I think, except for some stray "foam hairs"! 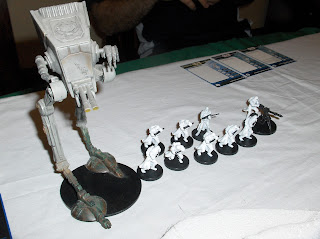 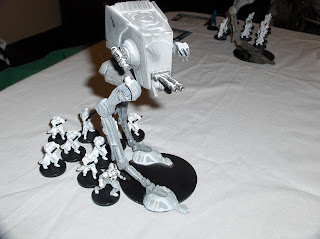 The Imperials advanced towards the Rebel lines, each section of infantry hugging an AT-ST for cover. The walkers laid down an amazing amount of fire, blowing up the Rebel turrets with relative ease. 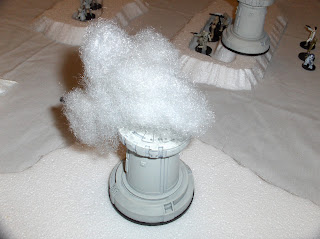 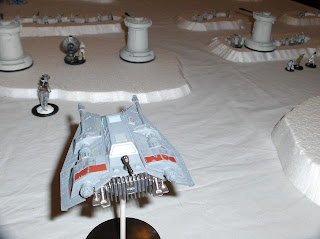 The Rebels found it hard to crack the AT-STs with the relatively light weapons they had to hand (the walkers have 120 hit points and the most damage the Rebels could do in one shot was 10 or maybe 20 points with luck). However, the Rebel guns were deadly against snowtroopers - many of their heavy weapons had a "splash effect" that could cause damage in an area effect. While we used the normal SWMB rules for the most part, I did limit the ranges of the weapons somewhat to allow the Imperials some freedom of movement in the early going. 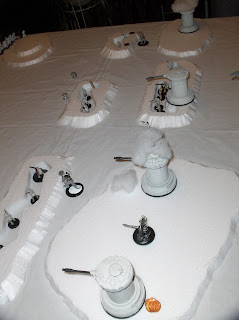 Once the Rebels had been whittled down a bit the Imperials busted a move towards the end zone. Holo Veers (or as he was variously referred to, "Beers", "De Beers", and "De Vries" ?!?) chipped in handily, dealing out 60 points of damage in a radius effect (!). The Rebels finally got rid of him by peeling away his entire support section of troopers. 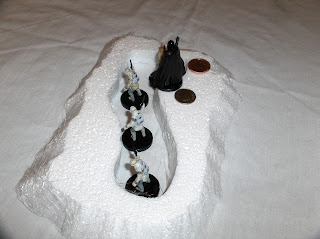 Once Vader made it to the Rebel lines, there was a huge hole in their right flank. Although he took some serious damage, Vader was still eviscerating right till the end.


The game ended on turn 8 with an Imperial victory - overrunning the few remaining Rebels in the trenches.


It was an enjoyable game. In fact, I am thinking of running it at a local convention this summer, as it's the perfect kind of game for that. Popular period/setting, easy rules, robust figures, minimal terrain to transport and set up/break down. If I do run it, I'll be making a few small changes - mainly to make it a bit tougher on the Imperial players. I'll ensure that the three AT-STs are each placed with a section of infantry and not run together as a unit - their group activation abilities are too powerful. Regenerating squads will not enter on the next activation by their player, but rather on the next turn. I'll move the "end zone" back six inches or so, and I'll provide dire consequences for the Imperials if Vader is killed - this is to discourage somewhat the tendency to use the Dark Lord of the Sith as a one-man commando team.
Posted by Dallas at 10:32 AM

fantastic. this looks so much fun. what game system and model range is this? do they have a website?

Since the star wars minis game uses a grid for movement, how did you adapt the game to be played on a standard tabletop? How far does each figure move? How many figures can be involved in a single melee? Looks great and a fun way to use a collection of minis.

Thanks! I should have noted that the models are actually pre-painted figures from the Wizards of the Coast (WotC) Star Wars Miniatures game (http://en.wikipedia.org/wiki/Star_Wars_Miniatures).

Apparently the game and figures ceased production in 2010, but there are lots of figures around from card/comic shops, game stores and on the Internet from eBay etc. Lots of fun!

Hi Michael - we simply substitute "inches" for "squares" in the movement rules. So humans on foot can move 6" and shoot, or 12" without shooting. Where the rules apply to a figure that is "adjacent" we interpret this to mean within 1". As far as melee, as you know there is no real "melee" concept in SWM, just "adjacent attacks". We play such that any figure in base contact can make an adjacent attack.

I should also add that in large games like this one, we alternate activations by player. That is, there were three players a side in this game, so they split up the troops three ways. After the priority die is rolled at the beginning of the turn, one player from the winning side activates his whole group, then one player from the other side does the same, etc. It moves things along much more quickly (not to mention less confusingly) than alternating activations by one or two figures.

Any game where we get to kill C-3PO with an orbital strike is a good game. Meeting the actual victory conditions was just a bonus :)

Great report! Looks like it was a lot of fun. Next we need to what an AT-AT could do!

Speaking as an Imperial Player, an AT-AT would have been fun, but I suspect it would have overloaded things a touch for Vader's side...

heh... all the "AT-AT" comments give me an idea... perhaps I'll convert a Rebel Pilot figure to hold a lightsaber and call it "Luke Skywalker - Snowspeeder Pilot" with a +10 lightsaber attack doing 100 Damage vs. AT-AT underbellies... ;-)

Looks like it was a lot of fun. Sorry I missed out.

This looked like a fantastic game. The simple white foam scenery was a nice touch. Great payback for such a small investment in resources.

I'm a fan of the old West End Games Star Wars Miniatures Battles, and this report totally evoked the look and feel of that older system. The plastic prepainted minis from Wizards make a great substitute for the metal miniatures used back then.

So your hybrid Wizards SW:Minis rules and the old West End games rules gives a second life to both oop sets of miniatures.