Return to "Check Your 6!" - "Initial Encounter"

Yesterday I hosted, after too long a wait, another "Check Your 6!" game. After distributing several bottles of Sleeman's beer around, and then pouring myself a mug of Croatian "Ozujsko" (drunk from my 40Kegger "Mug of Victory"), we played the first scenario from the CY6! campaign book Over the Channel: Battle of Britain.

Location: Over the Firth of Forth

History: The Supermarine Spitfire received its baptism of fire on this date when aircraft from 602 and 603 Squadrons intercepted nine Junkers JU88As of KG 30, who were bombing Royal Navy warships in the Firth of Forth.

Objective: Victory points. The RAF scored vp's for enemy aircraft shot down, as usual. In addition, the Germans received 3 vp's for every plane reaching the British fleet.

Below is a photo of the nine KG 30 JU88As. These are all F-Toys kits, from the collections of conscript KevinH and myself. The kits are pre-painted and easily assembled. I obtained a squadron code decal sheet for 12 aircraft from a fellow on eBay (no, I didn't fully decal all of mine before the game), and Kevin had his squadron codes made up by Paul at Spare Time Hobbies, a local brick and mortar hobby store. 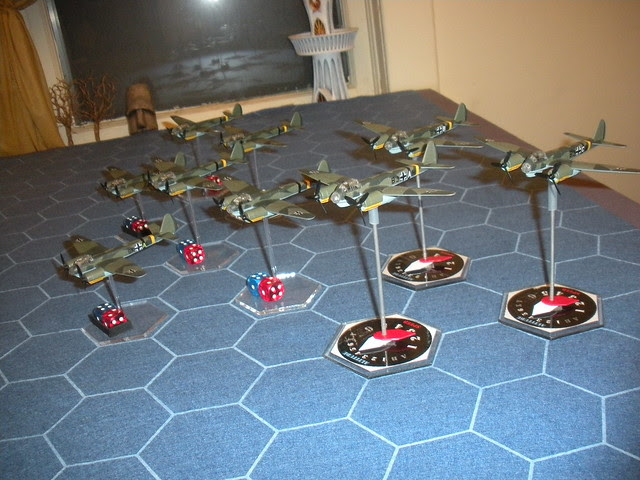 I remember fondly our first Conscript game of CY6! back in 2007, when all we had for bombers among us was a single HE-111. Good times.

Up-scaling the scenario to 1/144 scale, I used a technique started by BillC wherein the bomber formation stayed stationary; during the putative bomber movement phase, everything else would move relative to the bombers max formation speed. Bomber aircraft that were damaged would thus slow down and drop back out of formation...

Below is half of the RAF forces present, a flight of three Spitfire I's, run by Kevin, Brian and Dallas. Kevin and Frederick ran the planes in the second flight, for a total of six Spitfires. 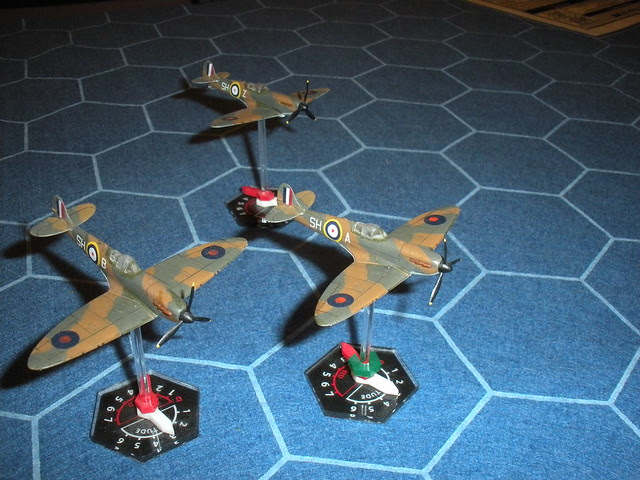 Below, after random setup of the RAF aircraft, this is the initial position of all forces, looking towards the northern table edge. 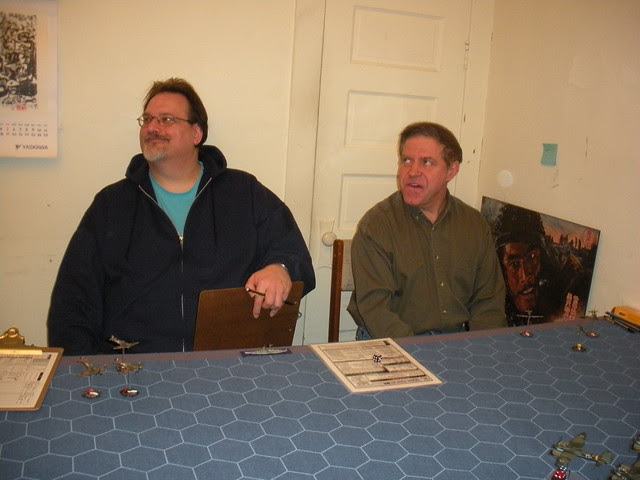 We rolled for the optional scenario rules. The Germans got to use an extra hex of movement for one plane, up to three times during the game. I figured I would try and save these extra bursts of speed for the end run to the British fleet. The RAF had a single plane (code SH_V) with such a good crew chief that its speed was increased to 5.

Instead of a head on attack, the two flights of RAF planes circled around, respectively, to the west and east of the bomber formation. The western flight had a harder time, since they were trying to climb from TAL 2 up to the bombers' altitude, TAL 4.

Below, the eastern flight of Spits swarms over a kette of JU88s. 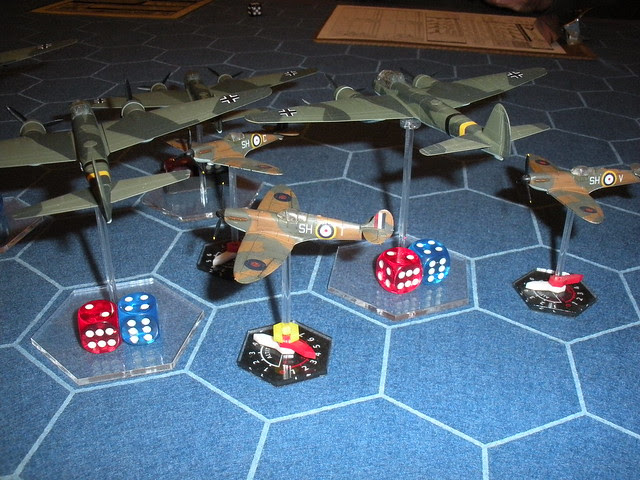 Closing the range, the Spitfires' firepower soon started to take effect. Below, one JU88 can be seen to take an engine hit, and another was hit in the airframe. 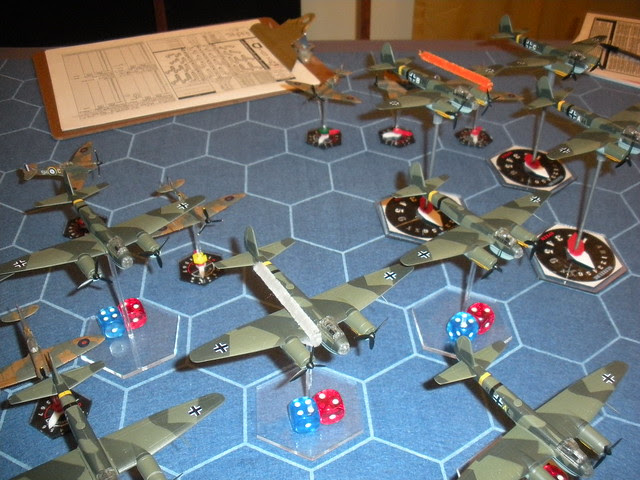 However, one of Kevin's planes tried to make a tough manouevre and lost control. The rookie pilot never regained control, flying (tumbling) off the table to to south, never to be seen nor heard from again. 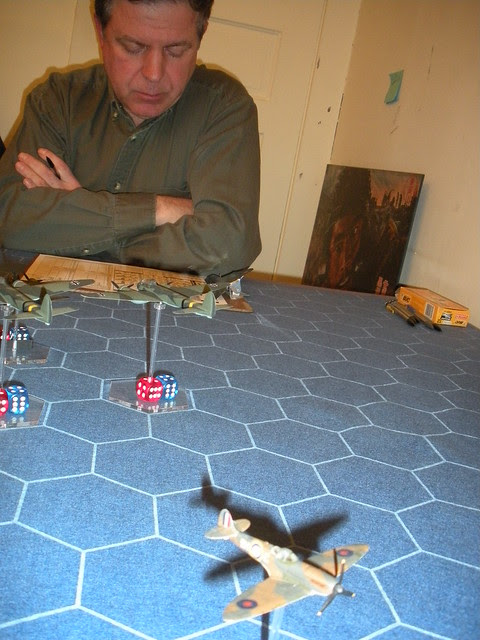 The bombers' defensive firepower wasn't to be denied. Below, Spitfire SH_V takes an engine hit. However, due to its superior ground crew, the engine's top speed was only reduced to 3. Nearby, another German bomber can be seen to have taken an airframe hit by Frederick's flight leader, flying SH_T. 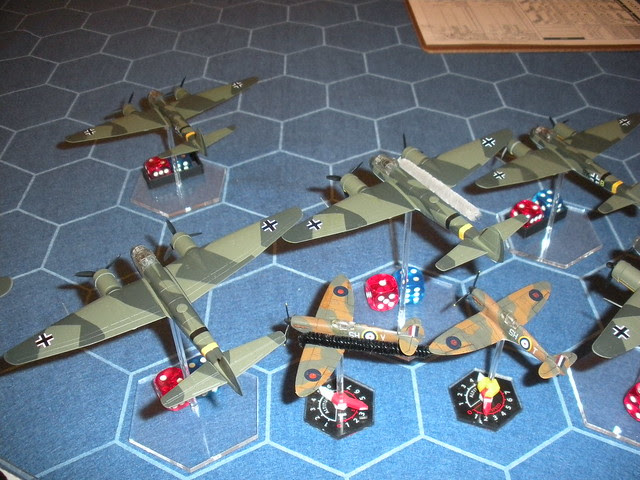 The German formation started to break up. In the photo below, the German squadron leader has nosed ahead, seeing the British fleet in the distance; one of his wingman had taken engine damage and is seen falling back. The formation leader of the farthest kette (in the upper part of the photo) has just received an engine hit from a damaged Spitfire. A wingman will soon have to take over leadership of the flight. The nose of another JU88 can be seen to the south (right); its damaged engines could not keep up with the rest of its mates. 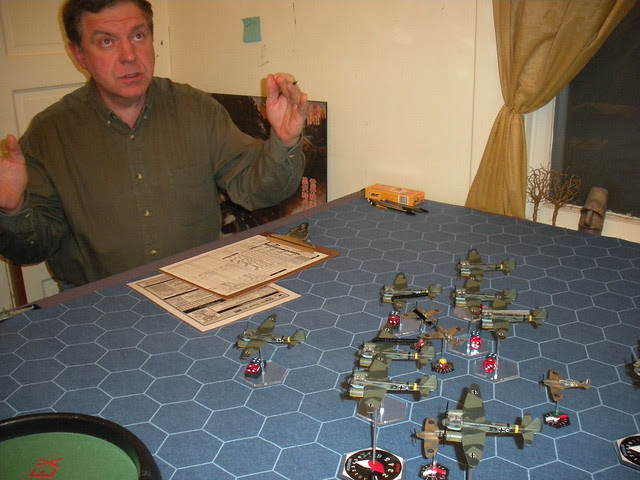 The turning point in the game arrived. The two rearmost German planes dropped out of formation and, failing their aircrew checks, they jettisoned their bombs with the intent of turning around and flying home. 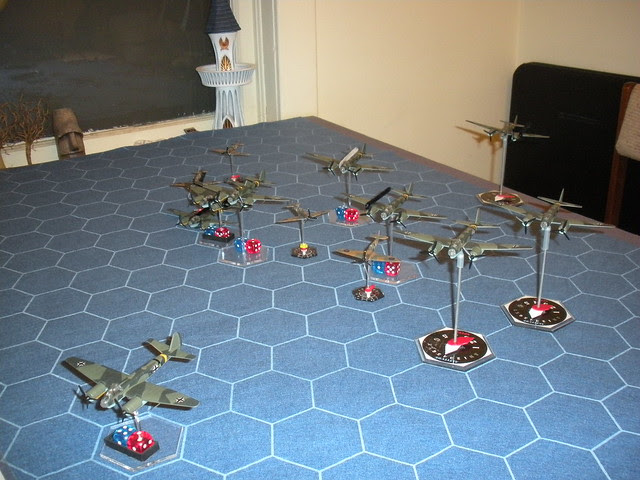 During the same turn, Kevin's remaining plane splashed a bomber, seen in the photo below. 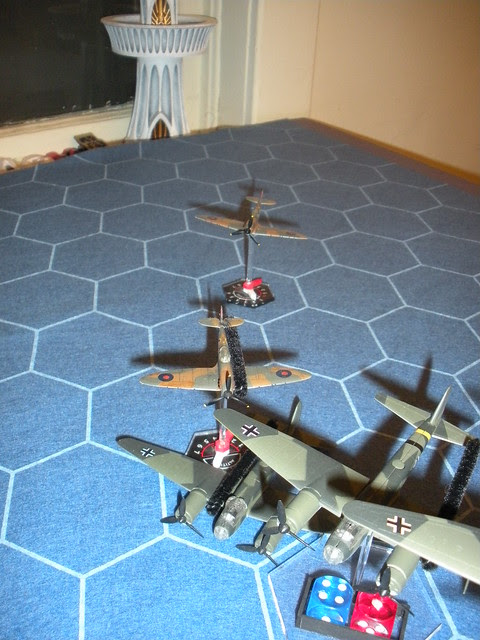 Frederick's +0 wingman poured fire into another bomber, hitting its engine. The bombers' return fire shot down the Spitfire, but the pilot managed to bail out OK, and was subsequently rescued by a ship from the nearby Royal Navy. Below, Kevin's Spitfire shoots down another damaged JU88. Off to the east (left), Fredrick's SH_T can be seen breaking off from the dogfight. His aircraft had just run out of ammo, after damaging five(!) of the German planes. Meanwhile, the German squadron commander is about to fly over the closest elements of the Royal Navy, represented notionally by the model ship at the bottom of the photo. 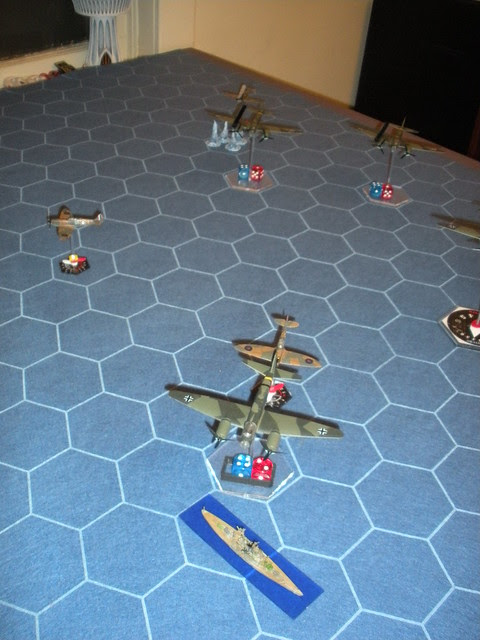 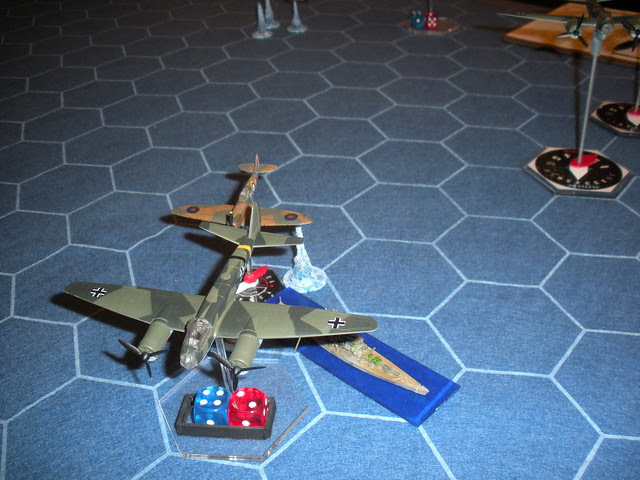 Below, another German straggler was shot down, after it had prematurely dropped its stick of bombs. 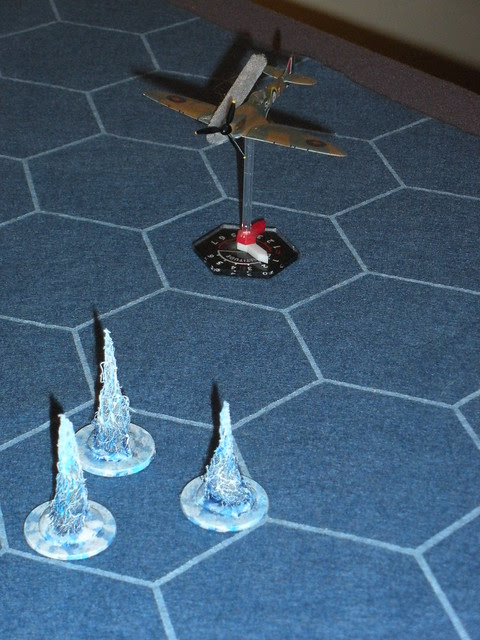 Here's a panorama view of the last of the action. 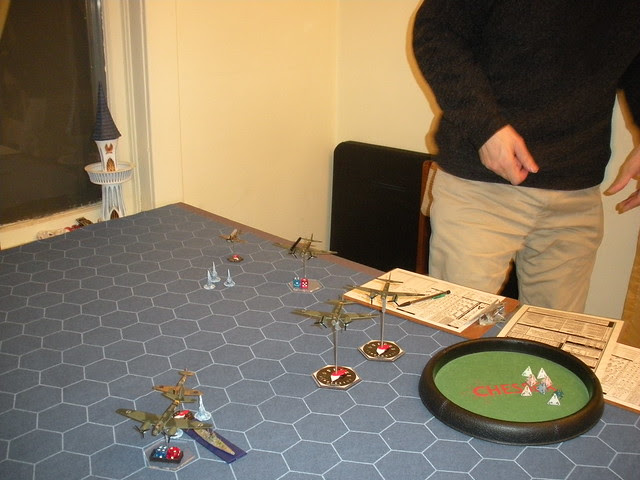 At game's end, the Germans were able to put only three planes over the Royal Navy's ships, and they had shot down a single RAF Spitfire. The British had shot down or driven off six bombers, making it a decisive RAF victory.

The "Man of the Match" was surely Frederick's flight leader. Though he didn't actually shoot down a single enemy plane, his effect on the engagement was indisputable. By damaging so many enemy planes, he forced some to drop out of formation, and set up kill shots for the other, less skilled Spitfire pilots, ensuring the British victory.

Several players remarked about how much fun they had playing CY6! again. This makes me want to run more Battle of Britain games, and strengthens my desire to write some more Mediterranean scenarios for the Italian SM.79's and MC.202's that I have.

Thanks to everybody who came out to kibbitz and to play.
Posted by DaveV at 2:37 PM

Thanks for hosting a great game, Dave. Being a big fan of 602 (City of Glasgow) Squadron, it was a lot of fun to be able to play George Pinkerton even if only in miniature.

Thanks again, Dave - that was a great game! And thanks to "Dusty" for setting up all those damaged bombers. My remaining +0 pilot got 3 "partials" from that outing!