As I continue to get slaughtered in the Analogue Hobbies 2nd Annual Painting Challenge, I am on the lookout for small projects that can net a few points here and there - the equivalent of small, local counter-attacks that buy a little breathing space before the overall epic-fail resumes.  These two 15mm scale Panzer IVs from Battlefront were perfect for just such a project. 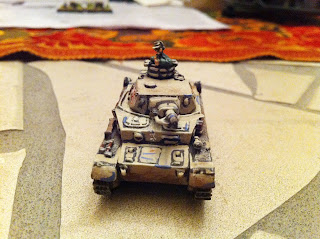 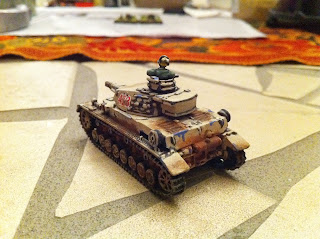 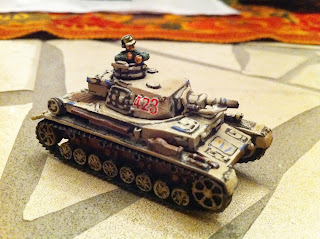 I stumbled across these models - already assembled and primed no less! - in my massively disorganized "pending" pile, and they made for a perfect project while (speaking of epic fails) the Winnipeg Jets somehow managed to beat the Washington Capitals last week.  Besides, my 15mm DAK and 8th Army collection could use a little shot in the arm, as they haven't seen any action in quite a while. 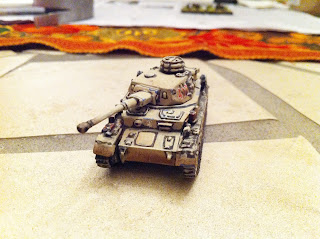 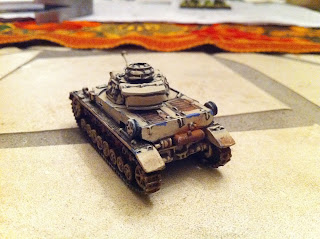 I haven't painted DAK stuff in quite a while, and felt pretty rusty working on these models.  Lucky for me weathering covers up lots of mistakes. Applying the tactical numerals was also tricky - the Battlefront decals are great, but the hatches etc. on the side of the Panzer IV turrets make it impossible to get an even landing space to place them.  Even with the help of decal softener, they look distorted by the hatches because, well, they are.  Overall it's still better than what I think I could manage with my own hands, however. I sometimes wonder if there is a non-rage-inducing way to come up with a stencil? Has anyone out there tried this?

There are some more 15mm WW2 projects in the pipeline, but they will switch gears away from North Africa and head into Europe and the later war period.  I already have a Jagdpanther, so I thought I would assemble a few troops to go along with it, starting with some panzer grenadiers from Battlefront. Hopefully I will have them done during the challenge period to scrape out a few more points, and maybe inspire a 15mm WW2 game soon with Dallas.
Posted by Greg B at 12:30 PM

Looks good dude. I don't think a stencil would be the way forward as you'd still have to make it lay flat on the surface in order to use it... I think painting by hand (or thinner decals) is the only solution!

Letraset perhaps? I've used it personally with mixed results in the past.