Note: My apologies for cross posting from my blog but I wanted to get maximum press coverage for Greg's gorgeous Napoleonic Austrian collection and celebrate the inauguration of my new gaming room here in Regina.


Last weekend Greg and his lovely wife, Linda, came to Regina for a holiday weekend visit to which we all ate and drank to excess and caught up on our sleep. Greg and I also took the requisite time to game like men possessed. On top of a suitably bloody game of SAGA, and reacquainting ourselves with 'Conflict of Heroes' we also played a cataclysmic 'Spearhead' scenario set in the opening hours of Kursk (see Greg's excellent batrep below). These were all great fun, but undoubtedly the main event was our Napoleonic scenario based on the French attack on the Allied center at Austerlitz in December 1805.

Historically, Vandame's assault on the Stare Vinohrady was virtually a non-contest. The remnants of the mauled Allied IV Column, composed of six battalions of the IR#23, five severely reduced Russian battalions and their attached artillery, tried to hold the heights, but the French had both the numbers and the quality to quickly overwhelm them. Nevertheless, in reading the numerous accounts of the engagement I thought there were a few 'what-ifs' that  if cobbled together could make a viable, if somewhat asymmetrical scenario. The following is what piqued my interest:
So for our scenario I incorporated the above conjectures and worked with the hypothesis that Kolowrat and Miloradovich have decided to concentrate and coordinate their efforts thereby bringing their forces together - forcing Vandamme to engage them as a combined force on the summit, on advantageous ground of their choosing.

For our game we used our home-grown rules, 'Food for Powder', which do a very good job of reflecting unbalanced engagements. This battle was actually fairly large for a battalion-level game (24 battalions, 4 regiments of cavalry and 3 batteries of guns) so we played it on a 6x10 surface to give us enough room to maneuver. Some may notice that I did not model the Heights on the tabletop - in my reading it seemed to suggest that the path Vandamme took on his assault was along a very gradual slope and therefore would not have granted much tactical superiority to the Allies so I decided to leave out modeling the Heights for sake of clarity.

For our battle we had John and Dan on the French side, while Greg and Sylvain ran the Austrians and Russians respectively.


The first turn was fairly quiet, seeing the French move towards the heights along their entire front, including their guns. For the Allies, they stayed in place but were very lucky in their reinforcement roll and an composite brigade of cavalry (Austrian Hussars and Dragoons) arrived on their right flank. Greg formed them up in column of squadrons, with the Hussars leading and the Dragoons in support. 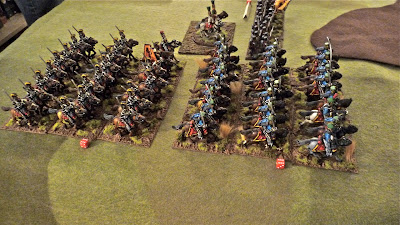 In the second Turn the French brought in their own cavalry in the form of Boye's bigade of Dragoons (under Dan). They deployed on the French right flank, in extended column of squadrons, diagonal to the Austrian cavalry. This choice of deployment had a critical impact in the following turns for both sides as the cavalry had free reign in each of their sectors. Eyebrows were duly raised with this heap of snorting cavalry showing up on the tabletop all at once.

Amongst our group, Sylvain is legendary for his caution so you can imagine the hoots of derision when he began to retrograde his Russians in response to the arrival of the French Dragoons. (As you will see Sylvain had the last laugh as his refusal of the left flank probably saved the Allied line.)

The third turn was a corker. First thing you have to understand that Dan is the antithesis of Sylvain. I like to think of Dan as the General Haig of miniature wargaming. To Dan's way of thinking 'If the first assault does not break them then the twelfth will certainly do the trick...' As such Dan's French Dragoons duly charged the Russian left flank as soon as they got the chance. Since the charge began from a long distance away (practically in Vienna) the Russian battalions had enough time to form squares. Undeterred, Dan noted that most of the Russian squares were not well-formed (our rules differentiate between 'solid' and 'hasty' squares) and so sent in the leading regiment of Dragoons to see if the Russians would loose their bottle. It was not meant to be. The Russians held their position and repulsed the Dragoons, but not without suffering some casualties and disorder in their ranks.


Meanwhile in the center, one French battalion decided to take the bit by the teeth and move ahead of the advance in line formation... While up the slope the two Allied artillery batteries hammered away at the approaching French columns, who inexplicably neglected to shake-out into less target-rich line formations and so consequently paid the price. 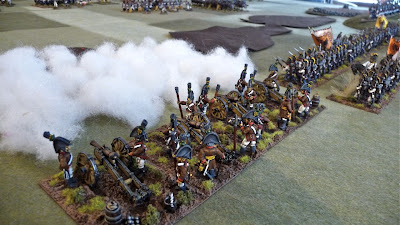 Back to the Allied left, Greg noted the impetuous advance of the solitary French battalion with an arched eyebrow, and thought it was too good of an opportunity for his Austrian Hussars to pass up. Greg knew he'd have to 'roll Vegas' to get the requisite moves in order to close, but he rolled the dice hoping they'd be kind to him. Well, the dice gods were smiling on Austria and Greg managed change formation, sound the charge and head for the French battalion.

Again, as the charge originated from so far away the French battalion had a very good chance to form square. In 'Food for Powder' there are Impetus Dice (good mojo) and Friction Dice (bad mojo). Both Impetus and Friction are drawn from unit quality, officer rating and environmental conditions. Both are rolled simultaneously and you literally have to take the good with the bad (or vis a vis). Well, John rolled well enough with his Impetus dice, but the Friction roll was completely off the register - to the extent that the French battalion continued to trudge along, wondering why the ground was shaking, trumpets were blaring and their comrades to the rear were waving their arms and shouting...

As John would say later, his battalion 'had the distinct misfortune of being ridden down by the 'flyboys' of the Horse & Musket era'. The only thing that saved the French battalion from complete annihilation was that the Austrian Hussars were at the end of their tether and very fatigued, so the mauled survivors were able to make their escape.

Turn four saw the French grind forward, closing with the Allied positions while the Russian and Allied guns gutted a French column. Nonetheless, the 1st of the 57th 'Le Terribles' got into action against the Russians and quickly broke a battalion that had been forced into square by the nearby French Dragoons. The French guns were dragged forward 'by bricole' and unlimbered in preparation to punish the tightly packed Russian formations. I'm sure there were many muttered prayers in those formations...

In the center Greg knew his victorious Hussars were desperately exposed and winded so he committed his remaining cavalry, the Dragoons to try to cover their retreat.  This turned out to be a little Pyrrhic as the Dragoons were shot to pieces by every French battalion's voltigeurs on their 'Death Ride' to the Hussars' support. Nonetheless, the exhausted 'flyboys' of the game managed to get extricated and began their ride back to Austrian high command to present the French colours they had captured.

I'm sorry I cannot give a final account of the scenario as this is where we decided to break for the evening (we spent a lot of time laughing, eating and drinking.) Nonetheless, we looked over the field at 'halftime' and surmised that while the French had certainly been rebuffed in a few areas they were still in an excellent position on the Allied left flank to start an envelopment with combined arms. The fragile Allied line composed of reduced battalions and conscripts had not yet been truly tested and it would be touch-and-go to tell how it would turn out for them. It was really anybody's game.

It was great fun, and all of it due to an excellent bunch of guys to game with. I extend my thanks to them all for making the night so entertaining. A special thank you goes to Greg and John who both travelled great distances to attend and brought many beautiful toys from their own collections in order to make the game that much more colourful - bravo!

I had such a good time that I'm already planning for the next Napoleonic weekend...

Saw the post on Curt's blog. It does look a fantastic game, two massive games in one weekend...can't be bad!!!

Great report of what looks like an enjoyable game.

That is an impressive gaming room, I am jealous. Maybe when the kids are old enough and move to college, I can hopefully start turning bedrooms into gaming areas, hehe. Amazing paint jobs!

Fantastic figures! tHANKS FOR POSTING.

Thanks guys - much appreciated!

Wow the game and the figures looks great!
Is your Food for Powder rules available to the public?

Wow the game and the figures looks great!
Is your Food for Powder rules available to the public?

@ Mandarin - I believe Curt C and his crew are still refining their rules. He may post back here with a little more info...

@Mandarin: Yes, Greg is right, 'Food for Powder' are still very much in their 'beta' stage. Nonetheless, we are working hard to get them to a state where we can possible self-publish on my blog. I would hope that we will have something fit for the public by late spring. Keep an eye out at http://analogue-hobbies.blogspot.com/ for updates on the progress of the rules.

And thanks for your interest!

Hi folks great figures although were the vineyards any kind of hinderance to movement at all? I think a better physical rendering of them on the table would have add a bit of color to what is obviously a pretty dull battle field, PS- are those rules any closer to fruition - I am looking forward to them as i continue to muddle through ole Black Powder casting about for a rule set yet again for decent Napoleonic gaming (General de Brigade is next picked up a copy a few weeks ago)

Excellent report on what was an obviously fun weekend!

Still a wonderful post and always tremendous to come back and revisit.