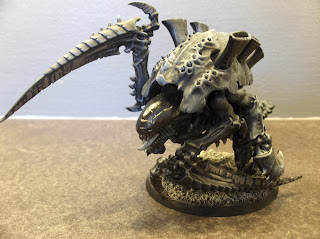 Awhile back I'd picked up some Tyranid models in a trade - reinforcements for Hive Fleet Nostromo, my "Alien"-themed Warhammer 40K army.  The gamer I purchased the models from was an acolyte of the new mania for rare earth magmets - in particular, for magnetizing every possible part of a model that might conceivably be swapped for a different WYSIWYG "load-out". 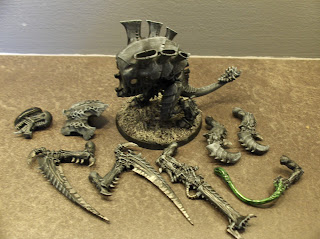 This is actually not a bad idea on a Carnifex since it can be built as a shooty-fex or a close-combat-fex, depending on arm options. Above you can see the model with its greebly magnetized bits all removed (except for the tail spike which I forgot to remove - yes, it's magnetized as well). 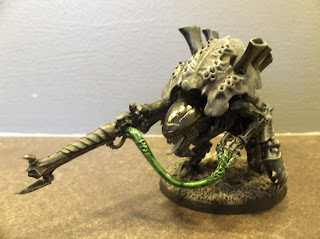 Here it is in "shooty" configuration. As no ranged weapons came with the model I got, I rigged up a gun and left arm I had spare from another model with some magnets. Looks OK and works well. 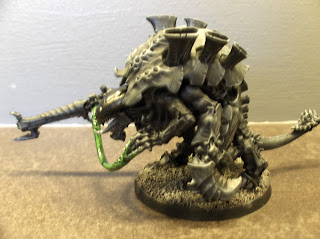 I'm still kind of ambivalent about the whole magnet-mania that's so au courant right now in 40K modelling. One the one hand it appeals to my inner cheapskate/pedant, since all options can be modelled on a figure and swapped at will, enabling perfect WYSIWYG without having to buy multiple models. On the other hand, drilling and fitting the magnets can be a pain, and makes the models much more difficult to paint - all of the magnetized components have to be painted separately. And at the end of the day, it's easy to go overboard. For example, the Carnifex model comes with three different shoulder carapace options, corresponding to upgrades from Codex: Tyranids, and the previous owner magnetized all three option pieces. Although I generally subscribe to the idea that options should be modelled on the figure, I really would not be that fussed with using one carapace piece to represent any option, and just paying the option points and noting it in the army list. I don't need to see poison sacs modelled on the figure with magnets! And to me, all this faffing about with clipping magnets on and off and posing the arms makes the models seem more like action figures than accurate miniature representations of combat troops (or in this case, terrifying monsters). Although in this case I appreciate the previous owner's efforts, I don't think I'll often seriously consider magnetising options on my 40K models.  ﻿
Posted by Dallas at 6:17 PM

I often have ambitions of using the magnets, but lack the hobby abilities to pull it off properly.

I also use magnets, to change off turrets with different weapon loadouts on my Eldar tanks.

I've even seen some guys use them for 28mm human-sized figures (alternate gun arms, etc.).