Well, it's been over a year since I last posted about the War of 1812 project. I figured it was time to do an update! That, and the fact I have some GREAT NEWS! (but more on that later...)


My friend Tim and I haven't yet done any games (mostly, because I sort of "stalled" on the painting of my figures!), but we're getting closer to that now. I recently started to get my "painting MoJo" back somehow, and have been working on a number of things, including some War of 1812 items.

First off, six North American Indian figures by Conquest Miniatures. Conquest make some beautiful figures! The detail is amazing, and the weapons are slim and 'life-like' - not the big, bulky "clubs" of most 28mm figures. I have another six in the works presently - hopefully, they will be done soon too! 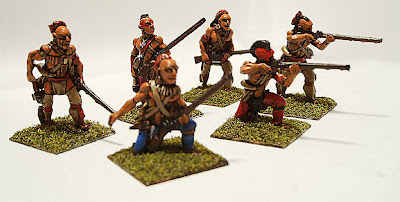 Next, a British Cannon and Crew by Wargames Foundry. The crew are based on 20mm metal bases, and the cannon sits on a piece of magnetic sheet glued to a piece of plasticard. This allows a couple of crew figures to "attach" to the gun base to allow for easier movement of the gun during games. 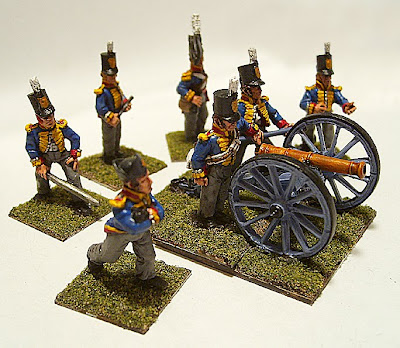 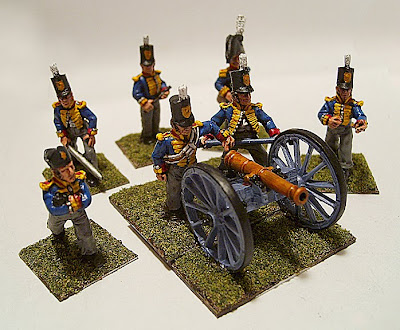 OK, remember that "GREAT NEWS" I mentioned earlier? Well, here it is...

I got to thinking maybe I could get some decals made for the backpack number! That seemed like an easy fix to the problem. However, finding someone to make the decals has been a proverbial "uphill climb" for most of the past year! I tried a few people that do the "at home" decals, but basically, no-one was interested in the idea of marketing these types of decals, or wasn't that keen on doing 'custom' decals like this...

We do a lot of Check Your 6! games from time to time, and I've bought some 1/144th decal sheets from a couple of Ebay sellers over the years. One seller that was very good to deal with, was Matt S. - the seller, "mehusla" at 144Direct on Ebay. I contacted him recently with my idea. As it turned out, Matt was a sort of "kindred spirit" having tried to paint backpack numbers on a lot of 32mm Napoleonic figures! We emailed back and forth for about a week, trying to figure out a way for me to create a file that would produce crisp, sharp numbers at this tiny size! (the backpack numbers wind up being about 2-3mm wide!)

In the end, I was hitting a brick wall on creating a usable file (Matt wasn't able to work with my vector art in the program he regularly uses), and although Matt was keen to help, he had projects of his own to work on, and couldn't get to my decals right away. The backpack numbers would have to wait till Matt was able to create a file on his end...

As luck would have it, I ran into an all-together DIFFERENT problem with one of our upcoming Check Your 6! games! I had three German JU-88 bombers, and I wanted to change up the "ID" letters on the side, so all three bombers didn't have the same "ID" - that would just look weird!

I visited one of the local hobby shops (one I don't get out to all that often, I'm sad to say!), Spare Time Hobbies, looking to see if I could find anything remotely similar to the decals I had from the JU-88 kits. Pete didn't have anything at the time, and I was pressed for time as we were having the game the following day! Pete said, "...if you have 10 or 15 minutes, I can print some up for you...?" I was ecstatic! I didn't know anyone in town had one of those fancy "home decal" printers! Pete scanned the decal sheet I'd brought with me, and about 15 minutes later with some fiddling in Corel Draw, I had a bunch of "ID" letters for my JU-88 bombers!

This immediately got me thinking about my backpack numbers project! The next day, I emailed Pete my "backpack numbers" vector art file (since he works with Corel Draw, he actually PREFERS a vector art file!) and asked if he could try printing it for me. Later that day, I got a reply that the file had worked fine, and I could stop by any time to pick up my decals! I was almost giddy driving home from Spare Time! FINALLY, I'd be able to finish off my 49th Regiment of Foot figures!

As to the decals, I put a bit of Gloss Varnish on the backpacks where the decals would go (a trick I learned from the Plastic Modeller folks some time back!) and applied all the decals. After they had dried, I painted a little more Gloss Varnish over the decals to seal them in place.

And here's the results!!
(by the way, the British Infantry figures are by Knuckleduster Miniatures) 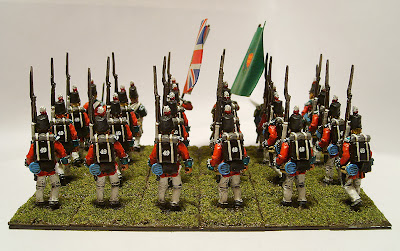 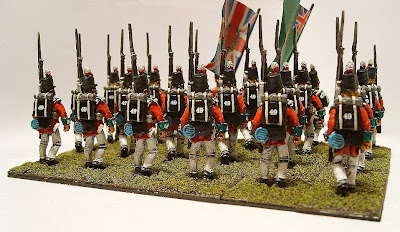 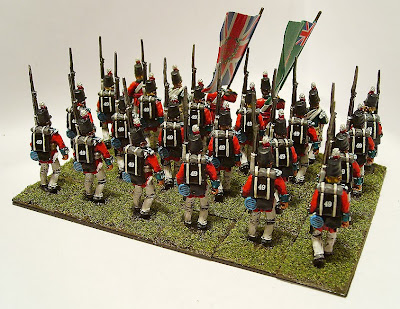 And lastly, a close-up of the decals. 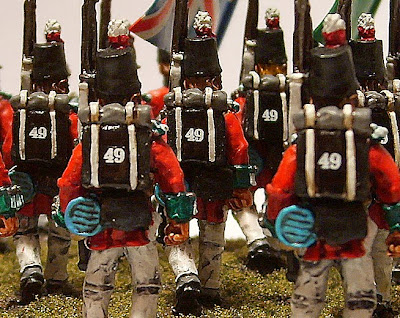 I have to give a big "Thank You" to Matt from 144Direct for his willingness to help with this project! --and to Pete from Spare Time Hobbies for helping me finally get my idea to work! --and LOCALLY, to boot!! Thank you very much, Gentlemen!
Posted by Kevin H at 7:41 PM

Now to get back to work on my 89th Regiment of Foot figures - for the Crysler's Farm battle!

Awesome models, Kev. Would love to see you put on a game with them'

Look's great Kevin. Can't wait to see these out for a game.

Stunning work! They are all very beautifully painted. Dean

Great work on these.

Thanks for the comments, folks. It's been a rather frustrating year, trying to sort this 'backpack number' thing. Didn't seem right to leave them blank, and until now, the decal idea hadn't been bearing any results. Glad to finally have it sorted!