Some Fun With 15mm WW2 - Jagdpanther from Battlefront

I have the good fortune to be able to game with an outstanding group of friends, and I am doubly fortunate to have family who, while not at all getting what the heck we're up to, care enough to give gaming stuff as Christmas presents.  Two years ago my brother was kind enough to get me the Jagdpanther vignette box from Battlefront. Not only do you get one of these heavy duty vehicles, but a handy smashed house in which it can hang out, waiting to wreck some Allied stuff.

I stumbled across the box in the basement last week, and felt guilty that I had not yet painted it, so I put it together and painted it on the weekend.

Like nearly all of the Battlefront vehicles (at least that I am aware of), the model is a mix of resin and metal parts.  The casting was clean, and the parts assembled very well.  Battlefront is not much for instructions - not important for the obvious bits like the treads, but useful for stuff like exhaust etc - but thankfully there are a lot of photos out there on the ol' Internets to help me figure it out. I went with both hatches open for crewmen to have the vehicle "unbuttoned".

I primed with black (of course), then I put GW Snake Bite Leather as a first coat, followed by GW Desert Yellow.  After that, camouflage was dabbed on with a brush (GW Dark Angels Green and GW Dark Flesh).  Naturally, Devlan Mud wash from GW was used to bring it all together, and when that dried, a very thorough dry-brush of GW Desert Yellow to soften the camouflage and bring up the strange scratchy surface of the zimmerit a little bit.

A layer of gloss varnish went on next for the decals.  Testor's dullcote finished that off, and once dry, I dry brushed some Americana Umber on to the treads, followed by a bit of GW Boltgun Metal.  I then applied some pigment powders - rust to the lower bits of the shurtzen, treads and exhaust, black to the muzzle of the main gun, and (very liberally) dirt on the treads, shurtzen, wheels and a little bit over the tactical numbers. 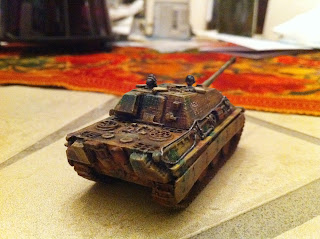 And so I have a cheesy "big cat" ready for the 15mm battlefield.  I don't even know what the stats are for this thing in Flames of War, but given the heavy armour, the 88mm gun, and Battlefront's penchant for special rules, I'm pretty sure this thing would be tough on the table and take out all sorts of Allied tanks before getting swarmed by T-34s, knocked out from the air, or just generally breaking down or running out of fuel. One Jagdpanther seems about right, given how rare these were in the overall battlefield. 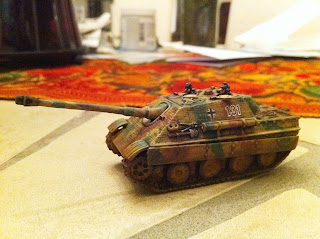 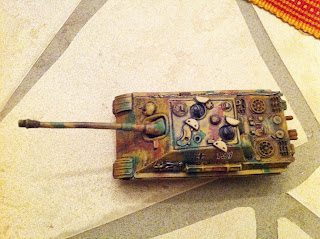 My 15mm WW2 stuff is focused solely on North Africa, so it will be a while before this thing sees any action in a game.  I have some other stuff for Europe for the Germans (not even close to a whole force), and I'm thinking Curt's painting challenge is a good excuse to at least get it started.  So watch for this tank to get some company as the summer approaches.
I really like the building that came with the tank.  But I have to say Curt C made a good point in his post that included my submission of this model for his painting challenge - wondering how exactly you would park an armoured vehicle this heavy in a house of any kind and not end up in the basement?  Man - those German heavy tanks could pull off anything....

Looking great dude! I'm planning to have a 28mm big brother to this model through the paint shop next!

It was good work, should have got a few more points.....

I'm a tough Judge, true, but I know Greg will be rocking the scoreboard with more 'worthy' things - like Napoleonic Austrians. Subjective and biased? Oh, hell yes...

Have you posted any of your North Africa items yet?

Thanks everyone - Kevin, I was searching through the blog, and I think there are photos of my DAK guys from that game we did in 09.

I have a couple more panzers coming up for the DAK, however...