Yesterday I had the pleasure of gaming with Harry at Imagine Games and Hobbies. Both he and I are scheduled to play at the Astronomi-con Winnipeg 2012 40K tournament next month, so I decided to take my latest Eldar list out for a spin.

Astronomi-con Winnipeg is happening much earlier this year (March 31 - April 1); it usually runs in June or July. However, Astro Dallas is being held this weekend down in Texas, and I guess scheduling the Vancouver and Toronto events is an issue. I had actually started work on my recently purchased Grey Knight Paladin models, intending to paint them up as a strike force of Crimson Fists Librarians. However, due to timing it looks like I will be going instead with a variation of my recent 40Kegger Eldar Swordwind list:

The list can reserve itself, and has a lot of speed and firepower of various kinds. The Avenger Serpents have longer ranged guns, to give support to the Fire Dragon's tanks. All vehicles have Spirit Stones, to keep them moving. No psychic defense, relying on firepower and tank armour.

Troops: Tactical Squad, 10 Marines with Missile Launcher, Flamer, and a Sgt., riding in a Rhino APC with Extra Armour

Elite: Terminator Squad, 5 Marines, 4 with Lightning Claws, and a Sgt. with Thunder Hammer and Storm Shield

The table was set up with some of the nice, homemade terrain available at Imagine, including a ruined cathedral in the centre of the board.

We played one of the basic scenarios, Seize Ground, using Dawn of War deployment. We rolled again and and placed three objectives , respectively, in the centre of the cathedral (a Ghostwarrior model), in the northwest table quarter (an Eldar Pathfinder in a foxhole) and the southeast table quarter (a Sister of Battle).

Harry won the roll for choice, and decided to take first move and deploy in the northern table half; he had easier access to the cathedral, where he could set up a strong defensive position. This was an interesting choice, since I prefer to move second in an objective-based scenario such as this.

Below, looking towards the southwest, can be seen the initial Blood Angels deployment. Harry set up, from east to west (left to right), the Rhino, the Captain attached to the dismounted Tactical Squad, and the Land Raider Crusader carrying the Death Company. 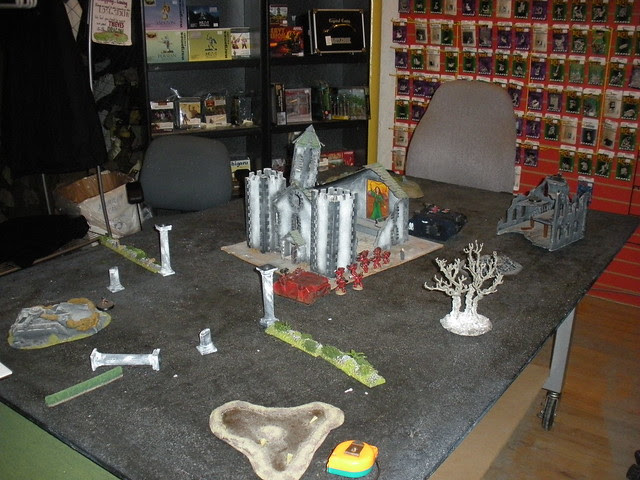 The Tactical Squad moved onto the central objective. The Razorback carrying the Devastator Squad drove on from the north table edge in the first turn. The Terminators and the Predator tank were kept in reserve.

In the bottom of the first turn, the Eldar brought on everything except the Warp Spiders, who were kept in reserve to deep strike. I jammed a Fire Dragon Wave Serpent into the face of the Land Raider, to keep it busy in the southwest table quarter, where there were no objectives. The Wraithlord moved up in support of those Fire Dragons. The Warp Hunter moved up to fire into the cathedral. To the east came the two Dire Avenger Wave Serpents and the Hornets. The second Fire Dragon Serpent, also carrying the Autarch, moved flat out just to the east of the cathedral.

Long range fire from the Wave Serpents and a Hornet immobilized and blew the turret off of the Razorback, seen near the northern table edge below. 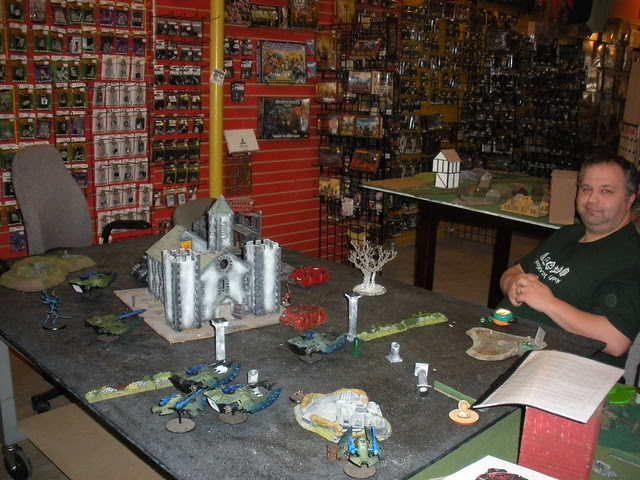 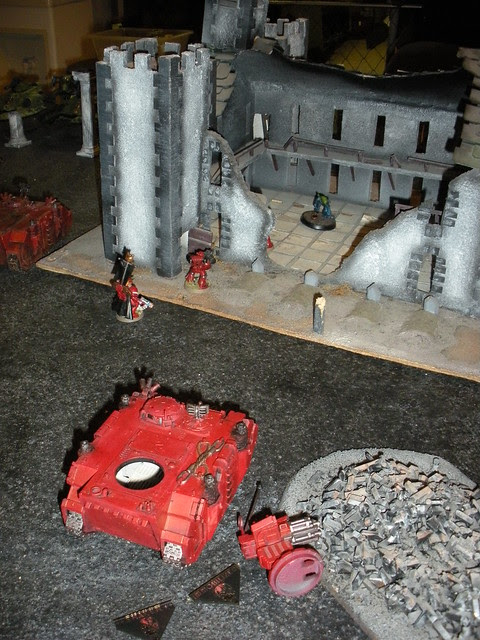 The Devastator Squad dismbarked behind some cover near the northern table edge. The Death Company disembarked from the Land Raider. Unseen to the east, the Predator Outflanked near a Hornet on the eastern table edge. 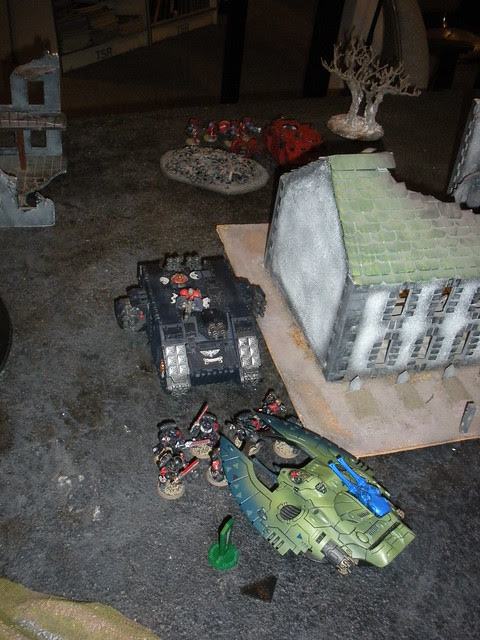 Space Marine fire and a hot Close Combat phase saw the first Fire Dragon Wave Serpent blown up. To add insult to injury, the surviving Dragons were Pinned in the wreckage of their vehicle. 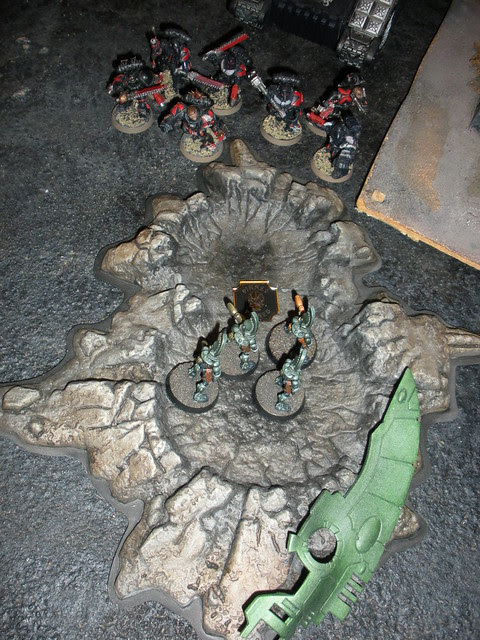 The second Fire Dragon squad moved up to the Predator and disembarked, leaving the Autarch inside under tank armour. The other Eldar vehicles moved west.

Eldar fire blew up both the Predator and the Rhino, both of whose wreckage is represented by the large blast markers below. 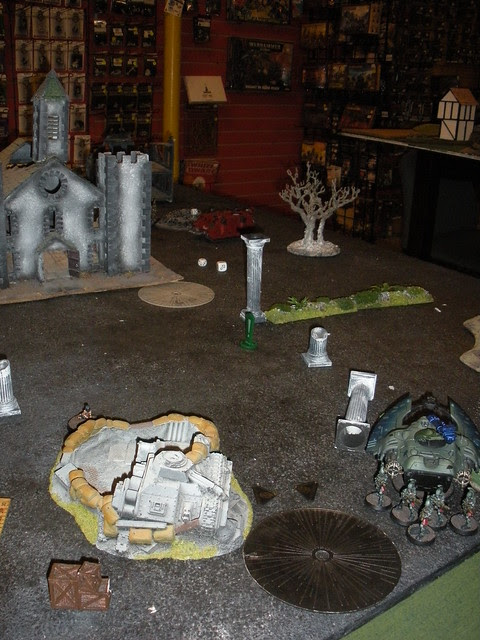 Meanwhile, the Warp Spiders had teleported near the Devastator Squad, killing half of them with their fire. 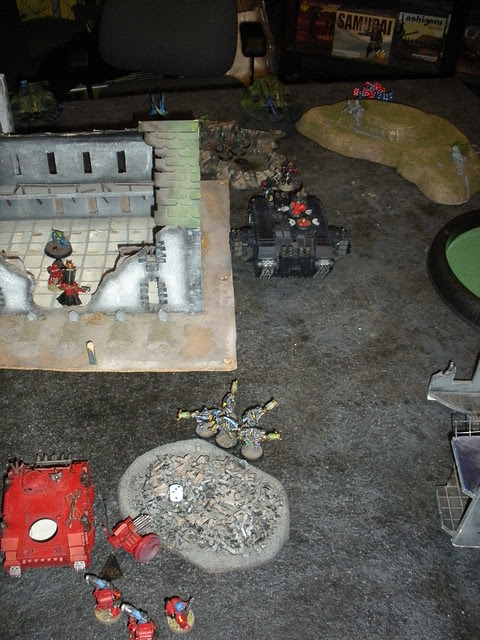 The Warp Hunter and the Wraithlord had previously managed to kill most of the Death Company. However, the survivors were Fearless and were able to subsequently charge into the Pinned Fire Dragons.

The Land Raider Stunned the Warp Hunter; its Spirit Stones reduced the effect to Shaken, so it subsequently flew away behind the cathedral to gain cover.

The surviving Devastators killed two of the Warp Spiders, whose morale managed to hold. 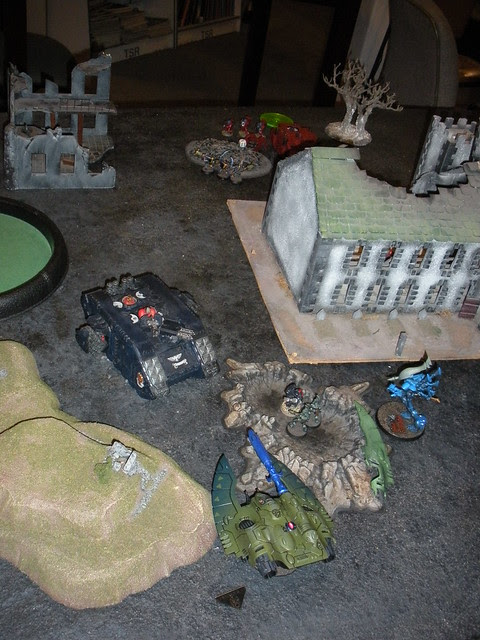 To the east, the Terminator Squad teleported beside the easternmost objective, contesting it. 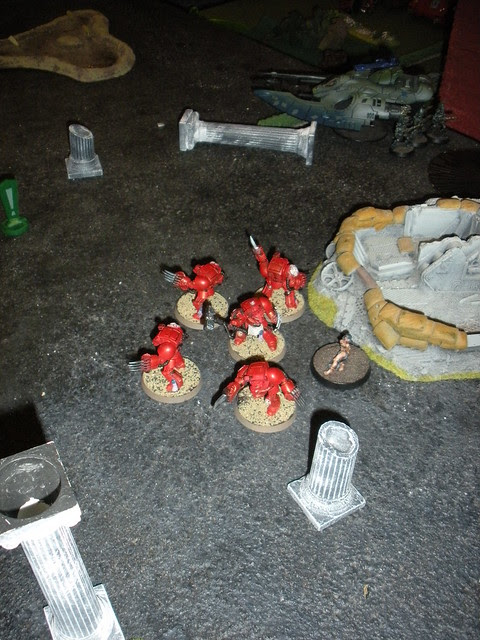 In the north, the Warp Spiders shot up the Devastators some more, then charged into them, tying them up so they could not use their heavy weapons. The Wraithlord charged the Land Raider. Though the Land Raider had moved, the Wraithlord's sword granted it re-rolls to hit, allowing the Wraithlord to slice up the Space Marine tank into chunks of plasteel. 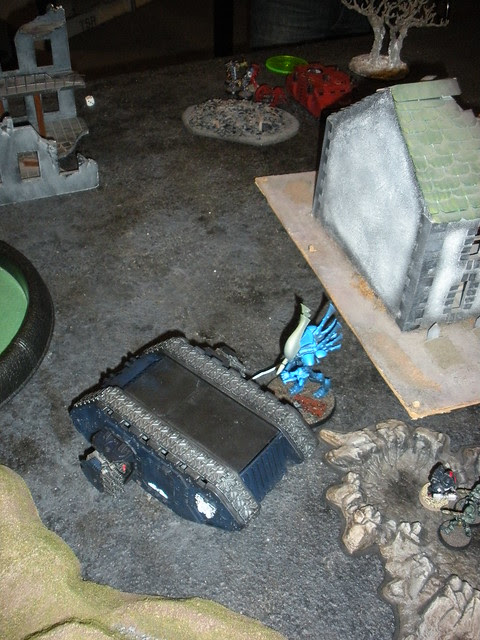 A Dire Avenger Wave Serpent moved up to the eastermost objective, hoping to eventually control it. The Autarch disembarked and rejoined the Fire Dragons. Combined Eldar fire killed off most of the Terminators. 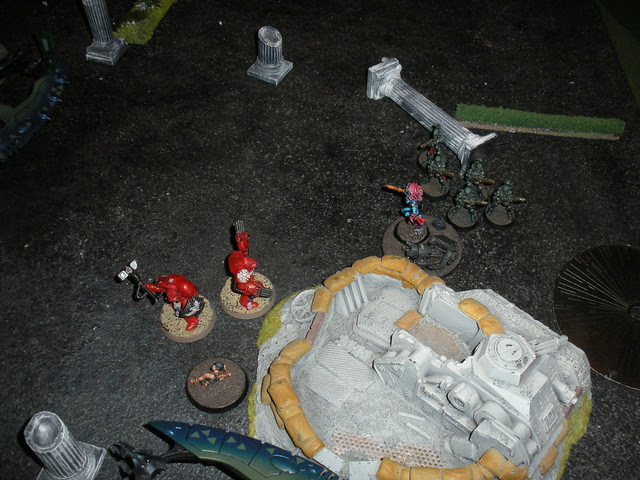 The Autarch did not charge, offering herself and her unit up as bait for the Terminators; if the Terminators charged, they would move away from the objective and no longer contest it. The Terminators were not armed with firearms, and thus could not just stand still in the face of six Eldar fusion guns. So, they accepted the Autarch's implicit challenge and charged. However, the Terminators were wiped out in the ensuing close combat, due to some lucky Eldar die rolls. 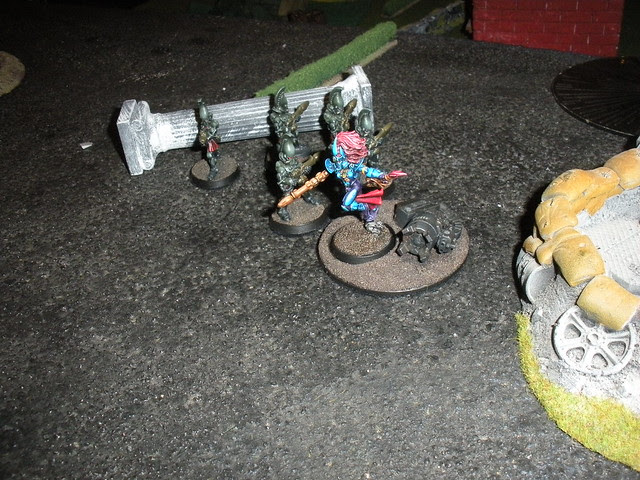 A lone Death Company survivor managed to wipe out the other Fire Dragon squad, and moved heroically towards the Wraithlord, which was already damaged by previous Marine fire. Armed with a Thunder Hammer, the Marine had an even chance of destroying the towering Eldar construct. 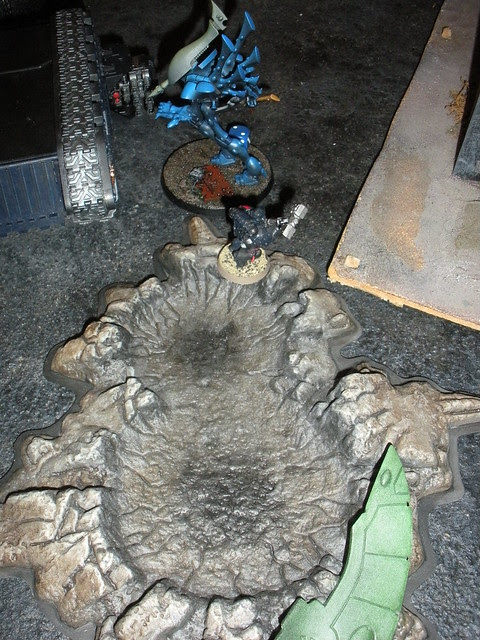 The Wraithlord failed to kill the Marine with its fire, so it charged into the wreckage to come to grips. In an epic contest, the Death Company veteran succumbed to the Wraithlord's 14-foot-long sword. 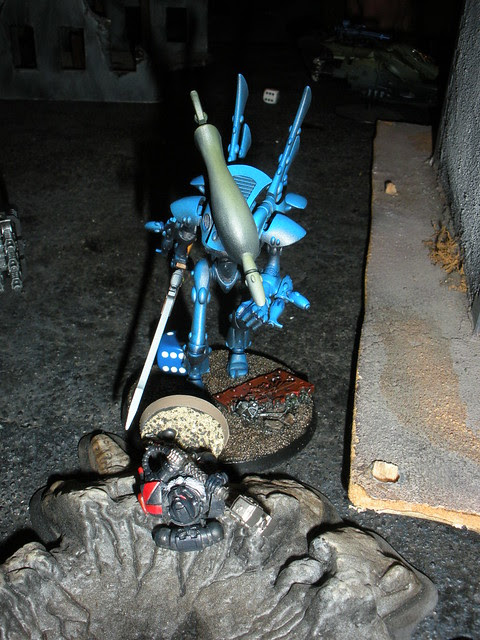 In the centre, the combined firepower of several Eldar tanks wiped out the Tactical Squad, leaving only the wounded Space Marine Captain to contest the central objective. 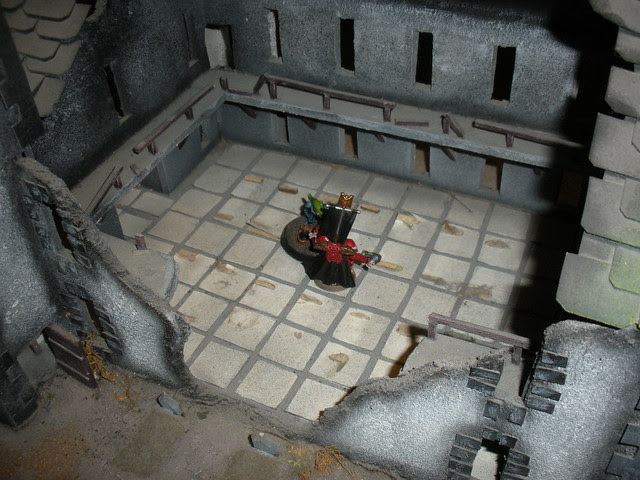 To the north, the second Dire Avenger tank moved flat out to within one move of the northeastern objective. The Warp Spiders managed to wipe out the Devastators in close combat.

By this point, at the bottom of the fourth turn, the only Blood Angel models left on the table were the Space Marine Captain and the immbolized, weaponless Razorback. The Eldar controlled one objective, and were about to take control of another, so we called the game. 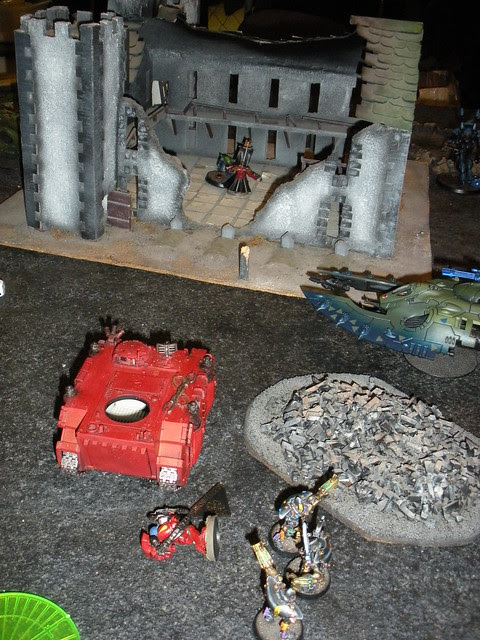 We sat and discussed the game afterward. The Eldar had gained an advantage in the first turn, by reducing the Tactical Squad to less than half strength. From that point on, the Blood Angels game plan changed, to one of trying to prevent the Eldar victory. The Warp Hunter's Aether Rift ability proved crucial, since it ignored cover; in fact, during the game the Warp Hunter never fired its weapon as a standard large blast marker, only as a template weapon.

In retrospect, the Blood Angels might have tried to deploy their reserves into the northwest table quarter, to contest that objective and to help the Tactical Squad control the centre. As it was, the Eldar had the speed to concentrate their forces and defeat the scattered Blood Angels units in succession.

Many thanks to Harry for a fun game; I do not often get to play against Blood Angels players. Thanks also to Wendy at Imagine, for allowing us to play on their table and with their terrain.
Posted by DaveV at 5:58 PM

Fun battle report. Looks like harry really needs some more troop choices in his army for that tournament.

WOW, great to see such grand works for the Astro event!

Have fun and do chat with Mike Major if you get the chance!

Lead Legion, Harry indicates that he will be taking his Imperial Guard to Astro. Lots of tanks and aircraft.

MurdocK, thanks very much.

At this very moment Mike is in Dallas, TX, helping run Astro Dallas this weekend. I shall be sure to say "hi".

We actually emailed back and forth yesterday; I just ordered some Warlord Games (ex-Immortal Miniatures) ancient Greek hoplites and a 28mm model Greek ship from Grand Manner, to do heroic age skirmishing. Mike is thinking of maybe getting some 28mm Spartans.