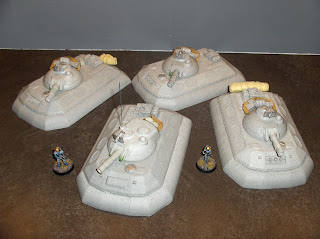 Four blower tanks from Old Crow's 25mm "Hammer's Slammers" range, pictured with two GZG NAC Royal Marines. They're big suckers, eh? (the tanks, that is ;-)
The blower tanks (three regular and one command blower - a full platoon) are now ready for the paint shop.  Assembly was pretty simple - assembling and attaching the pintle-mounted tri-barrel powerguns and the main powergun, and sticking on the deck stowage (a one-piece casting). OC supplies photo-etched brass components to build a turret bustle cage for extra stowage and these assembled pretty easily too. I also added some extra stowage I had laying around.
There was minimal cleanup required (Jez from OC takes considerable pains to clean up castings before shipment) but I did have an issue with the turret mounting assembly. The hull has a ~40mm hole and the turret has a flat bottom, so OC supplies a "plug" (about 40mm round by 10mm thick) that you affix to the bottom of the turret. The problem is that the plug is a bit too big around to allow the turret to comfortably rotate in the hull. Problem is solved by substituting a Litko 40mm round base for the supplied plug, and relieving the hull hole a bit with a half-round file. I like the turrets to rotate easily and now they do ;-)
Anyway, further updates as the tanks progress through the paint shop...
Posted by Dallas at 10:43 AM

the Old Crow stuff in general
is first class, and mixes in
well with the stuff from Brigade, in fact the two lines complament each other quite well and fill those nasty MTO gaps that happen to us!

Blowers, nice! I've been thinking of getting some, but their fairly flat featureless hulls scare me a little. Adding some extra stowage like you have might take care of that though.

Looking forward to seeing how they turn out!

Very nice. Looking forward to seeing them painted, and in action against the various badies of the universe.

Great stuff Dallas - think they might be ready for Legio-con?

They certainly could be (next in the queue after some WW2 stuff), likely won't have the infantry done though... (GZG NAC from Don M...? ;-)

Found the box in the shed, will photo it all this weekend...)