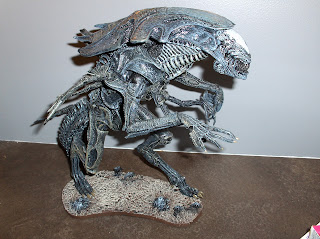 ...said the actress to the bishop... ;-)  Anyway, now that I've finished the base, I wanted to post a couple pics of the new addition to Hive Fleet Nostromo - the Hive Queen Bio-Titan.  I had always thought it would be fun to have a giant titan-like model for my Tyranid army, and I really like the Forgeworld Hierophant, but I just can't justify 220GBP for it...
﻿
﻿Enter salvation in the form of an action figure (!).  I was at a local comic shop awhile back and noticed this amazing huge Alien action figure... inquiring, I found out that it was a McFarlane "Movie Maniacs" figure that's out of production.  Of course this is no longer a problem as we have eBay... $35 and a few weeks later a box arrives with the model.  Unfortunately it was the worst packing job I'd ever seen - a few bits of flat styrofoam and a couple pieces of newspaper, packed into a box that was two sizes too small and bulging out at the top.  Result: two busted off arms and after a fashion, a partial refund from the seller.  I pinned the arms, trimmed and textured the base and added some 'nid bits and Rippers, then painted it to match the rest of the army.  The Queen herself required no painting at all, she was conveniently pre-painted the same colour as the rest of my models!

So she will be an adequate stand-in for the Hierophant.  I've even converted, but not yet painted, two bio-cannons to plug into the chest, where the small arms are, to represent the ranged armament of the Hierophant.  Very convenient.  I'm looking forward to wheeling out this 800+ point monster in an Apocalypse game (or as we call them on Fawcett, "a pretty big game of 40K")

She's beautifully horrible. Every time I see one of your new fabulous creation, I curse the distance there is between Regina and Winnipeg.

Awesome conversion, but I thought hive queens were even bigger..