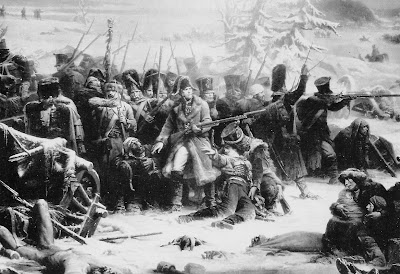 Here is a new Corp-Level Command stand for my 28mm French. This is Michel Ney, Duke of Elchingen, Prince of the Moskowa and Marshal of France. He was also known by many Frenchmen as 'The Bravest of the Brave." I thought I'd try to get him done for the anniversary of his death. This is a Perry casting and he is seen here as he would be in 1815 at Waterloo. The set also comes with two of his ADCs Pierre-Agathe Heymès (in red) and Pierre Levavasseur (in blue). I have also included a squadron trumpeter from the 2nd Dragoons of Kellerman's Reserve Cavalry Corps.

I have done up the stand to depict Ney after the first massed charge on the Allied squares in the late afternoon at Waterloo. He has just come back to gather more men from Kellerman's command to lead them back up the hill. Ultimately these charges would result in the destruction of over 5000 French cavalry. By the end of the day Ney would have four horses killed from underneath him, his epaulets shot away, sword broken, covered in mud screaming at the retreating French around him, "Rally on me! I am Ney, Marshal of France. Follow me, I will show you how a Marshal of France dies!" Yep, completely mental but that's how the boy rolled. 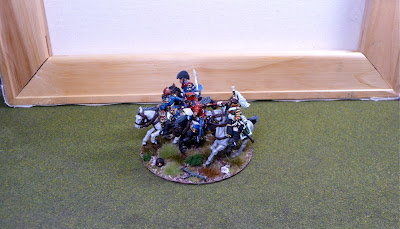 Having a Marshal for either 'Black Powder' or 'Republic to Empire' is pretty over-scaled but I reasoned that Ney did like to lead from the front so it would not be uncommon to see him down getting mucked-in with the lads. 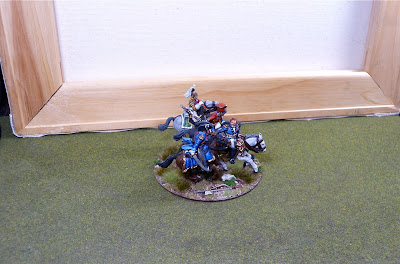 When the Bourbons were reinstated after Waterloo they wanted Ney's head for siding with Napoleon. The trial was very unpopular as Ney was well-liked by soldiers and the common folk. Nonetheless, the royalists wanted blood and so he was sentenced to death. Ney was executed by firing squad in the Luxembourg Gardens in Paris on December 7th 1815. He refused a blindfold and with his typical panache he gave the execution squad their orders to fire. Pretty hardcore.
Posted by Curt at 4:54 PM

Nicely done, Curt! they really look like they've some place to get to!!

I like this vignette. Tells a cool story, and looks great.

Also, nice to include an officer who gets so stuck in he breaks his sword fighting the enemy...

Thanks guys. I've always been fascinated by Ney as he was a perfect instrument for Napoleon. Usually useless when given independent command he was a near unstoppable when properly directed. He was loved by the men, who in turn would pretty much follow him anywhere. He was as near a berserker as could be allowed in those times (Dave, it is reported that he broke his sword at Waterloon smashing it over an abandoned british field piece in a fit of rage.)

Dallas, not to be a bean-counter but there are 4 mounted lads on the base (though its hard to see as they're pretty crammed together). I need every pip to try to catch up to Sylvain! ;)