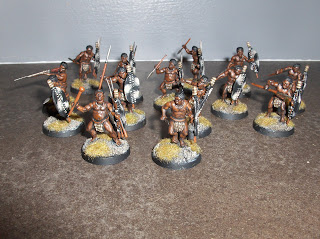 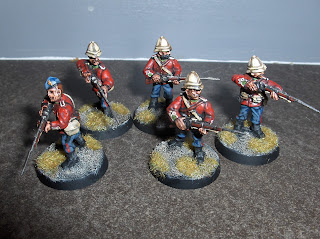 I've only assembled and painted five British infantrymen so far.  There are 14 in the box but I have to say they are great in some ways and not so good in others.  On the plus side they are plastic, and thus inexpensive.  I really like the separate pith helmets and they fit very well on the heads.  On the other hand there is something very hinky going on with several of the arms.  I basically had to resculpt the right arms from shoulder to elbow to make the shooting poses look halfway normal. 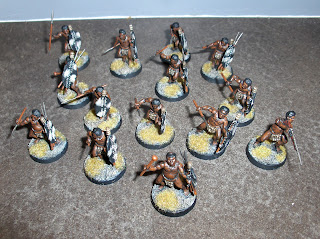 The Zulus are awesome!  They come 30 to a box with a great variety of weapons (assegai, spear, knobkerrie, musket, and captured Martini-Henry rifle) with a variety of married and unmarried heads, as well as shields.  I enjoyed painting the Zulus, it reminded me quite a bit of painting Uruk-Hai for Lord of the Rings, is that wrong?

Anyway, I have the rest of the Zulu box primed and ready to go, but they certainly won't be done before the deadline tonight.  For Christmas I got some very nice models from Empress Miniatures, including some Natal Mounted Police, British and Zulu command, and a 9-pdr gun and crew. Certainly won't be running out of stuff to paint in 2011 ;-) 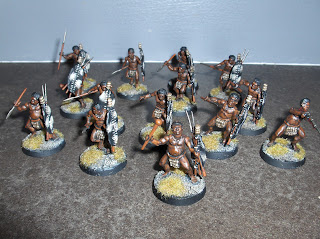 WF's Sci-fi Shock Troops had the same thing going on with some of the arms. Overall quality is a bit so-so, but their stuff is certainly on the cheap side.

I really like those Zulus! What colour combination did you use for their skintone? I have a box of these and need to get something done with them.

The skintone was black primer, Scorched Brown, Bestial Brown, Devlan Mud wash. African flesh is always tricky but I like the way these came out.