I have been avidly following the progress of my fellow Conscripts as they paint like madmen for the Fall Painting Challenge. Up to this point I have not thrown my hat in the ring. However, I may actually get on the leader board in a small way before year's end.

Colonial Marines (from the movie Aliens)

During the swap meet at Dallas' place a couple of weeks ago, I obtained from Conscript MikeF some lead 28mm Colonial Marines that he had painted. The figures clearly represent some of the named characters from the movie, including Sgt. Apone ("There's something in my eye"), Cpl. Hicks ("Eat this!"), Pfc. Hudson ("It's over, man!"), and Pvt. Vasquez ("Let's roooock!").

MikeF executed the camo schemes very well. After I based them on 25mm rounds and shaded them with glazes of Devlin Mud, the figures are 99% done. Below are pictured some of the re-based figs. 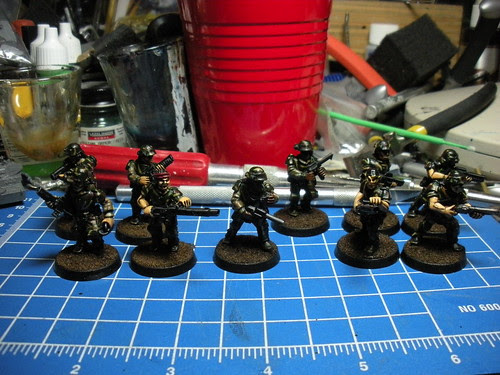 Getting these figures was also the impetus for me to finally assemble the Marines' ride - a pewter(!) M-577 APC from Leading Edge that I've had kicking around for over a decade. It didn't go together well at all. Conscript Brian can attest to the amount of filing, sanding and putty I used on the thing. After priming, first stage highlighting, and painting with green spray, the model awaits detailing and weathering. 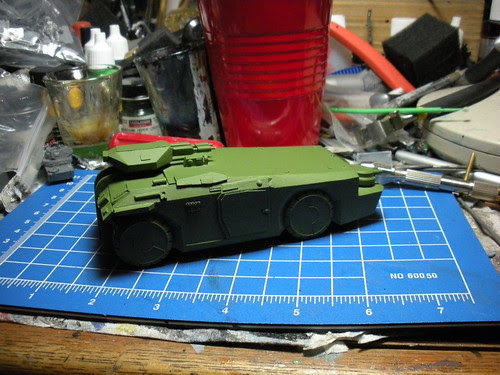 According to my research on the (fictional) Colonial Marine Corps organization, I have enough figures for three squads. Two of them can be broken down into smartgun teams and pulse rifle teams, plus there's a section Sergeant and a couple of incinerator armed Marines to swap for pulse rifles. With various re-based Aliens and "Hive Fleet Nostromo" provided by MikeF and Dallas, we will have some Marine vs. Aliens action over the Xmas holidays.

The new Eldar Hornet model from Forge World is a beautiful kit. I already have one from eBay, and I ordered two more from the manufacturer. I contacted the Astronomi-con tournament organizers, and the Hornet experimental rules are OK for use at Astro.

The Hornet is in all ways superior to the Vyper jetbike, for a similar points cost. If the Astro TO's are going to let me field Hornets, I certainly shall.

The main hull and tail is a single piece casting of mostly blemish-free resin. The engine/weapon mounts are another single piece. The Eldar Howling Banshee in the photo below shows the small size of this single-seat, light skimmer tank. 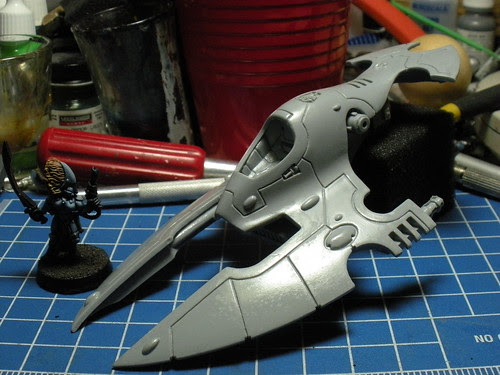 I have also obtained four more Forge World turrets for my Wave Serpent skimmer APCs. They'll be armed with scatter lasers and magnetized to fit the hulls. Below on painting stands are the turrets. Pictured on the right is my new force commander, a female Autarch kitted out with gear from the Howling Banshee and Fire Dragon shrines. 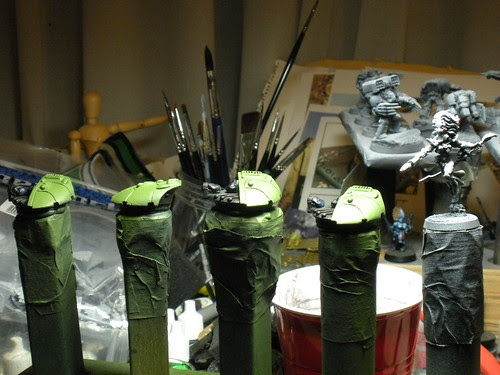 The Autarch started as a pewter Banshee Exarch. Both the Autarch's arms were pinned with brass wire and epoxied into place for strength. Below, the figure has already been primed black and has received its first stage highlighting with a dusting of white. 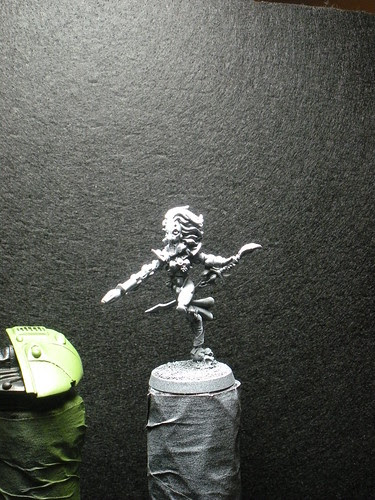 I've come up with the following tournament list (which scores 19/20 for Astro composition):

This is a "pure" mechanized Swordwind list. No psychic defense. However, I've managed to squeeze eight fast skimmer hulls into 1500 points (Serpents & Nightspinner AV 12/12/10 and Hornets AV 11/11/10). 50 Strength 6 shots are possible per turn, plus the close range anti-tank of 11 meltaguns.

The Hornets' Scout/Outflank ability and integral Star Engines, coupled with the Spiders' Deep Strike, will make this list's Fast Attack slot very interesting. The other tanks are kitted out for late game contesting/tank shocking.

P.S.: I've also obtained armour decals and a German bunker as an objective marker for the early war German Light Tank Company that I have on the go for Flames of War...

The APC is in pewter?! Yow - That must have been a nightmare to get together. Nonetheless, you did a great job as the lines look nice and sharp, without any crazy warping or bowing in the metal. Those Marines will look wicked when they're all spec'ed out.

Attaboy Dave... I expect some significant movement from you up the painting league table before December 31...

Thanks, Curt. There was some warpage on the hull sides and serious gaps in the hull-to-roof joins. The turret had brutal mould lines. Sweat equity, my friend.

Crazily enough, Leading Edge actually made a pewter drop ship to carry the APC. As bad a model as it is, I'd rather build the plastic kit of the drop ship made by Halcyon.