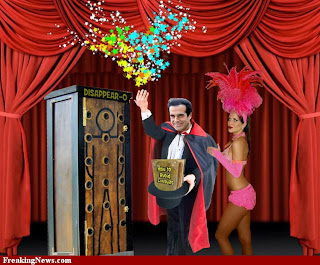 Yesterday, I had a rematch with Allan, this time with armies worth 2000 points. The Wood Elves were totally wiped out and did not score a single point against the Dwarves. But great lessons were learned and it was, as per the common expression on this blog, a definite morale victory for the Wood Elves. But let's review the story.

The scenario was "Battle for the Pass" and it is played along the narrow side of the table. The Dwarf army had 2x Grudgethrowers (1), one group each of Quarellers (2), Warriors (3), Hammerers (4) and, I think, Ironbreakers (5). There was a banner providing a 5+ ward save against missiles with the Hammerers and all the characters were with the Ironbreakers. Note the group of 5 Waywatchers (1 green) in the background deployed using the "Scout" special rule. 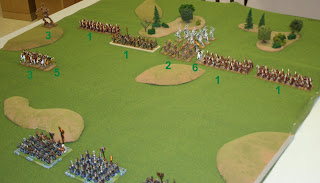 The Wood Elves had the usual Glade Guards (1), Dryads (2) and Glade Riders (3). This time, the Treewoman "Big Bertha" was present (3 again, oups). There was one hero with the Riders (5) and a Battle Standard (6) with the main forces. Note that because of the scenario, deployment was cramped and had to be done in two rows for the Dryads. The Glade Riders are pushing forward thanks to the "Vanguard" special rule. 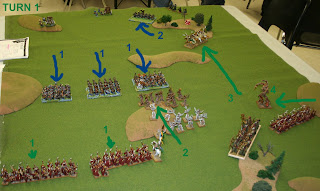 Before the start of turn 1, the Dwarves did a preparatory move thanks to a special rune. This allowed the Quarellers (2 blue) to get within charge range of the Waywatchers. The rest of the Dwarf units (1 blue) moved quickly forward to reduce exposure to arrow rain. I moved the left Glade Guards back (1 green), as the Dwarves were already within 12 inches. I moved the Dryads forward (2 green), with the hope to slow down the progression of the main group. The Glade Riders (3 green) raced to the rear and the Treewoman (4 green) marched toward the centre. 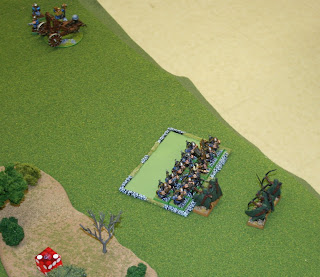 On turn 2 (see the die), the Quarellers connected with the Waywatchers. This was the first unit to disappear. 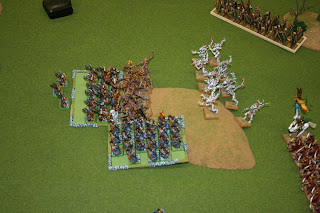 In the center, the Dwarves attacked my first unit of Dryads on two sides. That unit too soon disappeared. 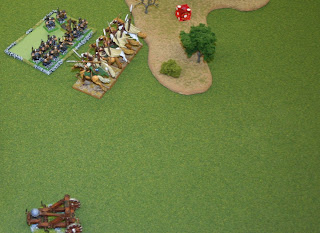 Bolstered by their success from last game, the Glade Riders attacked the Quarellers. This time, all the Riders, including the General attached to them, were killed. Another quick disappearance act. 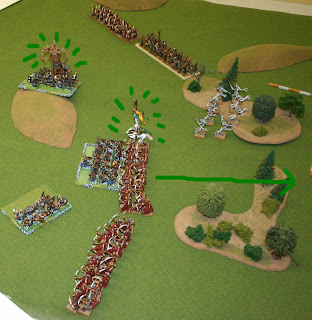 This image of the main battle tells the rest of the story. After sending the white Dryads into rout, the Dwarf main unit turned to face Big Bertha. Facing a Runelord armed with a magic weapon causing D6 flaming damage (Treeman are flammable), Big Bertha was chopped into firewood in no time. The Battle Standard was soon to follow, as well as the rest of the Glade Guard unit he was part of, who ran out of the battlefield. A total of 5 units and 2 characters disappeared.

Again, the Dwarves were great teachers and the Wood Elves are grateful for the precious lessons learned.
Posted by Sylvain at 6:27 AM

Yikes! I'm glad you also get to play against my Empire lads (and duly slaughter them) as otherwise it would seem that you should have saved yourself the effort in painting and just picked up some movement trays.