The NFL season continues to grind along (and strangely the Kansas City Chiefs remain in playoff contention) offering the chance to chase in vain after Dallas, Curt and Sylvain in our painting competition. I'm trying to focus for now on getting the darn Elysians done for 40k. Here are some photos of the recent progress - some snipers!

After getting the shaft a few times from Hive Fleet Nostromo and their Carnifex Spam, I figure some snipers are needed, given that they cause wounds relatively easily. Sure, the other team gets a save, but these days, everything in 40k gets a save thanks to "cover". 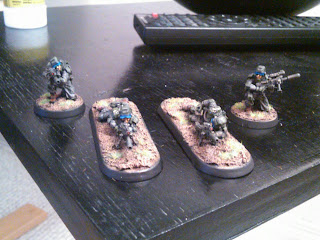 Of course, since Forge World made these models, the quality is incredibly variable, and you can see the one prone fellow still has a "bendy" gun barrel which I could not manage to completely straighten out depiste all the heat/hot water in the frigging world. But it's not as bad as it was. 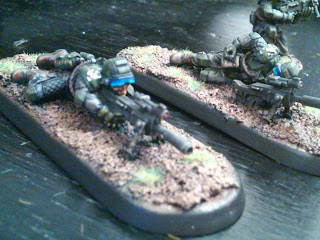 The sniper pack only comes with three shooters, but after painting 60+ Elysians, I am finally confident enough with them to start some conversions, so I put a fourth sniper rifle on a regular dude (the guy on the right in the picture above). The arms were a bit of a bodge, but it is still close enough. 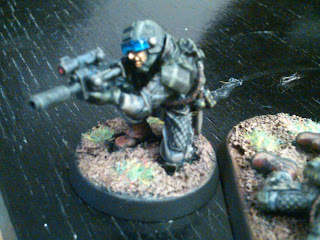 The snipers can go into the lineup either as part of a six-man special weapons team, or as weapons in the squads. I think I will probably use the special weapons team approach, but I may try and load of a veteran squad with four shooters too for fun.

I also finished one more officer and a couple more grunts - a vox-caster, a sergeant and a couple of special weapons. The Elysians are pretty packed for infantry now - One platoon with three ten-man squads, a special weapon squad with snipers, a heavy weapon squad with heavy bolters, two veteran squads - one with shotguns and meltaguns, and the other with lasguns and melta guns - a.k.a. "melta spam".

With the infantry out of the way, it's time to move on to what I like least...assembling vehicles....but the Valkyrie spam has started... 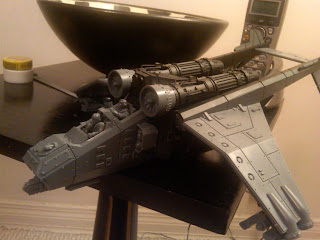 First objective is to finish off a pair of Valkyries to round out a squadron of the vehicles for the Elysians. They will be equipped with rocket pods and multi-lasers, and will hopefully match up well to the first one I did for them. Then it will be on to a "Vendetta" version of the craft.

I already cut my hand to pieces on Sunday getting two Valk models built, but I really want to get these buggers finished, so I hope I will have more progress to show next week!

Nice job. These snipers look like they know their business. There is no way the enemy can assault the remote control or the bowl of chips and live the next day to tell the story.

Great work! The kneeling sniper turned out really well. I can sympathize with the flyers as I did mine in the 'bad old days' when they were all in (misshapen) resin from 'Bodgeworld'. Nonetheless, they DO look great when they are done-up.

The bowl of chips is the first target any Tyranid army would go after...

The newer Forgeworld releases seem to be cast a little better. The turrets I got for my Wave Serpents are all well cast. The Eldar Hornet is a very nice kit, with the exception of its resin pulse lasers (noodly barrels that should've been supported internally by wire). Doesn't matter - I'm fielding it with shuriken cannons

I've been modeling a lot (for me) lately. The turrets are all ready for paint, the Hornet's is being cleaned up, I've converted a new Banshee-style Autarch, and Mike's Colonial Marines are re-based, with their M-577 APC assembled, primed and ready for paint.