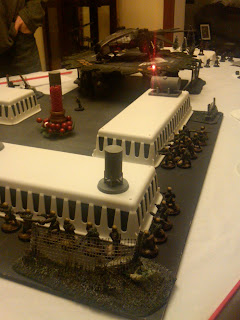 The holiday season is upon us, and to mark it we gathered at Dallas' place last week for a game of SpaceKrieg, the wierd and wonderful 25/28mm sci-fi setting where in the unpleasant shade of the distant future, there is only armed conflict...and tanks with huge guns.

Dallas set up the table in a suitable Christmas theme. About 40 Kommulist troops - including some new armoured infantry, backed by a scout vehicle, an odious new Kombot (christened "O Tannen-Bot" for this game) and the devestating SU-3000 took on a platoon of 30 Gün grenadiers, who were backed by a mortar, a recon tank, an APC and the dreaded Space Hetzer. 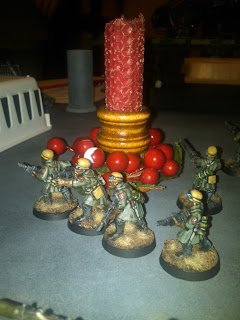 The objective of the game was to recover the majority of the objectives before the other side - three bomb-zombies on the table. Because otherwise the bomb-zombies would ruin Christmas, right? Mike F and Dallas rolled with the Kom, while Dave V and Cam joined me on the side that advocated peace through war. 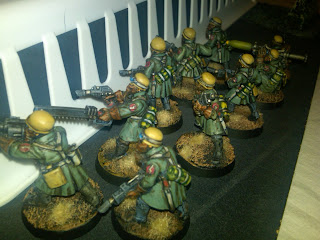 Patience lads - need to be sure we get priority...

As the game progressed, it became clear the Futurkom side would have an even more devestating secret weapon than any robot or tank - the violin! 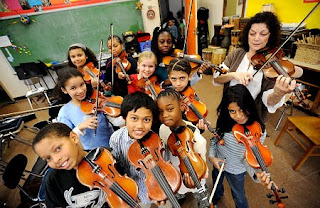 Several turns of whinging about the abilities of Gün Schwarm ("They hit on a three?" "The mortar hit how many people?" "Their training is WHAT?"), together with other big-lip tactics managed to obscure the fact that FuturKom actually WON the game. The Gün Schwarm certainly piled up Kommulists like cords of firewood, but it was not enough, as FuturKom managed to secure a majority of the bomb zombies by the end of the game. 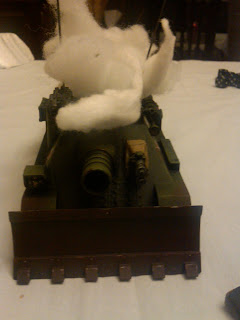 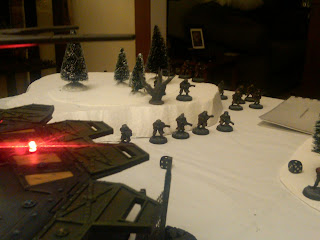 Hopefully Dallas can add a few more photos to show the Futurkom side of the battle. But a good time was had by all - even Mike and Dallas after they realized they had won!

Thanks again to Dallas for hosting, and to all who came to play!
Posted by Greg B at 5:25 PM

To be fair, I was merely a subordinate whi...commander.

Great report, Greg. Yes, we would have probably been shot by the FuturKommissar for "defeatist thoughts" but what the hey... the FuturKommandos and their mild codex escalation really saved us that time.

Quote of the night (year?) really belonged to Brian... when we were discussing how many turns to play and how to end the game, he quipped "the game only ends when the living envy the dead." Classic!