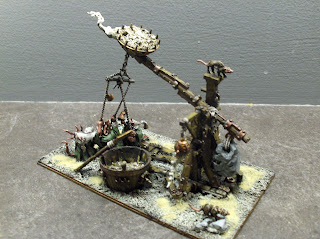 A great deal of the fun in this hobby, for me at least, is creating unique conversions.  Most often I'm doing this in connection with the wacky world of Spacekrieg (the FuturKom T-640, SU-300, "Rata" Flyer) or Rogue-Trader-era 40K (Da Red Barun) but my Warhammer Fantasy Skaven army has provided some fun conversion fodder too (Ratzer Tank).  This time out, it's another Skaven model, but unlike the Ratzer tank that stands in for a Doomwheel, this model represents an entry in the Skaven list that GW doesn't even make a model for - the PlagueClaw Catapult. 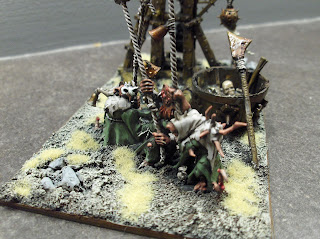 The PlagueClaw Catapult is another disgusting Clan Pestilens device - basically a sh!t-thrower. Every vile, noxious substance that the Plague Monks can scrape together goes in the basket and throws out a large template doing an S2 hit to everything beneath. S2 is no big deal, of course, but the kicker is that there's no armour save allowed. Hello, Bretonnian Knights... 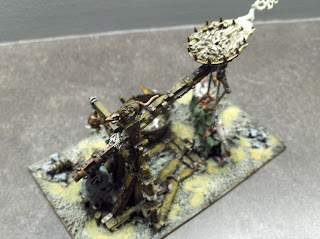 The base model I used was an Ork Rock Lobba which was assembled pretty much straight from the box.  I left off the winch part because for the PlagueClaw, it's the Monks that do the heavy lifting and they do it old-school, with chains ;-) 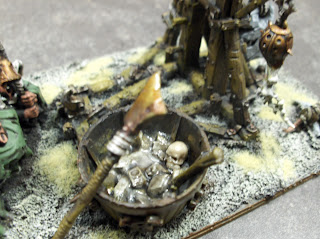 For the sh!t-bucket I used the top of a whipped cream container trimmed to size, with Skaven shield symbols attached around the outside.  I filled the inside with sprue rubble and white glue, with a skull thrown in for fun, liberally coated with gloss varnish.  The disgusting stained old scoop is from the GW Zombie sprue. 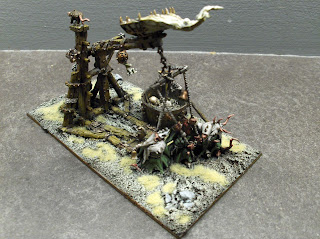 The warmachine's basket is a bit from the new Skaven Plague Furnace, as are the Plague Monk crew.  They fit in quite well, all I had to do was position them so that the chain they're pulling hooked on to the bottom of the basket. 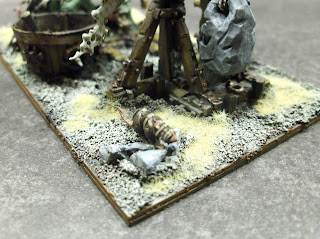 Seasoned with rats to taste, of course!
Posted by Dallas at 1:48 PM

Now you just need to HIT some Bretonnian knights!

The rat-scalation is getting serious...

This device has "fun time ahead" written all over it.

That thing is awesome. Three thumbs up!

I looked at this again and it just makes me want to hurl.

Nice one. Throw your shit all over the Brettonians! I bet the elves won't like it up 'em either!