There is no hope to catch the leaders in the painting competition now, but I am hoping to at least get my 40k Elysians finished before the end of the year. I am at the hardest stage of the process (for me) - finishing the Vaklyrie models to go with the force. Having the majority of the troops racing around the table supported by Valkyries will be key to achieving the unique look and feel of the Elysian force.

The plastic Valkyrie model is way, way, way, way better than the original resin creations from Forgeworld. Having said that, the Valkyrie is still a bit of a complex model - not a quick throw together - at least not for me. So I put off the Valkyries until I could finish the infantry. Well, that was pretty much done earlier this month. So I have finally buckled down and started in on the things, and I thought I would share some mid-way progress shots while pontificating on the idea of the door gunners.

One option I had to consider was the door gunners. Really, it's pretty neat - each Valkyrie box comes with the option to include two door gunners with heavy bolters in the compartments. In game terms, a slew of extra heavy bolters on the Valkyries could really give the guys some extra firepower. And conceptually the idea of the door gunners is cool. I thought I would try one of the models with the doors open and the gunners in place. Here are some progress pictures: 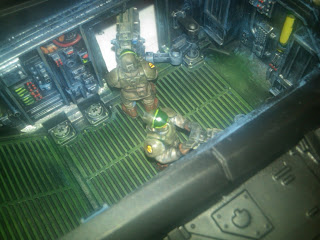 Painting this model has been a serious pain - I painted the gunners and heavy bolters seperately, and then left the roof off of the model to paint the interior before putting the gunners in. Now I need to finish painting the rest of the model. 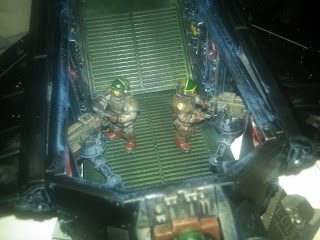 Another downside, in addition to the extra fiddly steps model-wise, is the fact that the gunners are pretty hard to see once the roof goes on the model. The heavy bolter is a larger weapon after all, the side hatches on the Valkyries are not all that big, and they are recessed well under the wings. My heart sank when I put the roof on, and I could barely see the guys! Maybe I should have used Dallas' LED system...

I thought I could overcome this by having the back hatch open so you could get a better view of the interior. That died when I DROPPED THE MODEL during the assembly process, breaking the hatch parts so that it can only now be glued in place. So the pictures above are probably the last anyone will really see of the gunners! Oh well.

When this is done, I hope having the one model with the doors open will serve as an excuse to claim that all of the Valkyries on the table have door gunners.

Overall, I have built three Valkyries, including this one, in the last two weeks. The other two are painted, and this one is in painting progress. One more needs to be assembled and painted - a "Vendetta" variant. I'm trying to get it all done in time to be counted in the painting competition...we'll see...

All told, I plan to load up a 1500 point Elysian force with lots of airpower - four Valkyries with rocket pods and heavy bolters, one "Vendetta" variant, and one Vulture gunship with twin-linked Punisher Cannons. Hopefully they will hit the table early in the new year!
Posted by Greg B at 5:17 PM

Very neat army. Are the Elysians compatible with the Spacekrieg Universe? Will there be a need for FutureVietCong?

Spacekrieg is infinitely malleable....we can get pretty much anyone in there.

I like the look of the door gunners - too bad we can't see them as well with the model buttoned up.

It would be interesting to pit the Swordwind's fast skimmers against the Elysians...

Nice work, Greg! Too bad your great interior cabin detail gets largely covered up. Its also a pity that the door gunners look so static (IMO). They remind me of those kids you see at Best Buy playing the video game demo boxes NOT someone who's jockying with turbulence, dodging anti-air and trying to manhandle a freakin' huge gun.