Yesterday, Curt joined me for a recreation of the 1940 Blitzkrieg in France. Advanced elements of the 6th Panzer Division, equipped with Pz 35t, were to secure the area surrounding the village of Lemembre, in order to allow the rest of the division to break through, while the French were trying to establish a defensive line with some tank units. Because of the late start (8:30), I've opted to give each side very few units. We used a ruleset that I designed with my friends in Montréal called "Orders". Curt got the French, I the German and we drew our battle plan on a map. I used to draw maps, but not anymore. A picture taken from above the board is now all we need, thanks to digital camera and color printers. My plan was to send my Pz35t on the hill while my recce would assess the situation in the village. Colonel Curt planned to send there his Panhard, while protecting the village with AT guns. 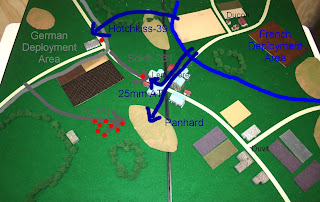 Here is the situation after the first turn. All the 6mm buildings were painted in the last two weeks. All units are carryng on their orders smoothly. 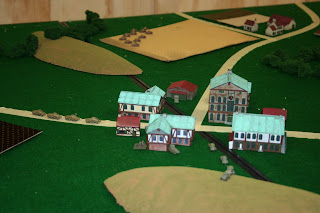 The Pz 35t are just about to reach the hill. Note the D% in the background. It's a small D10 into a bigger transparent D10. It makes the noise of a toddler's rattle when thrown. 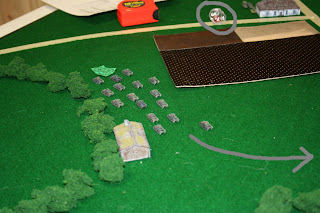 Surprise! The Panhard got first on the hill. From then on, things went pretty bad for the Germans. 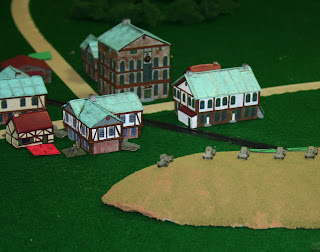 The Panhards opened fire with their 25mm against the thin armour of the Pz 35t. When the latter were finally activated, I rolled 81 for communication, needing 80% or less. So the triple move orders of the company could not be changed. The crew probably thought that the armoured cars were their own recce company and started waving at them. Anyway, on the next turn the company was quickly castrated. Then the Sdkfz 231 missed their morale roll with 96, needing 70% or less. Unable to move, they were shot by the French AT guns. Next, I was able to call in two 88s. Ha ha! But as soon as they were set up, I rolled 100 when shooting, resulting in a gun jam. The 6th Panzer division command, considering the resistance in Lemembre, decided to use a strategic manoeuver called a detour.
Even though the game was painful for the German side, it was fun to revisit the old rule system.
Posted by Sylvain at 8:52 AM

What Sylvain neglects to say is that if his command roll for the 38t platoon had been even average it would have been my French who would have been made into so much omelette. Nonetheless I was delighted with the outcome.;) I love the early war period as the tanks typically aren't so amped-up. Pretty much anything can kill them.

Dallas - Looks like I lost my French immunity :-). Have you taken a look at the names of the other villages on the map?