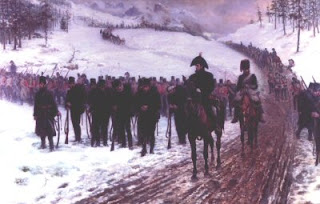 Last week, as our first playtest of Barry Hilton's  Republic to Empire, I set up the same battlefield we used for our inaugural 'Black Powder' game in November, a rearguard action on the Minho River as a quasi-fictional scenario set during Moore's retreat to Corunna in the winter of 1809. Dan took the British defenders and Sylvain led the French attack. As in the last game the British had two battalions of line infantry, two companies of Rifles and two sections of Royal Horse Artillery (a section each of 6 pounders and 5.5" howitzers). The British have to hold out long enough to allow the Engineers time to rig the bridge for destruction. Some monks from a local monastery have come out to help the heretics from the depredations of the French. (Each of the six monks serves as a turn counter for the engineer work party.)
The French came on with four battalions of infantry, two squadrons of Dragoons and as a new addition: two sections of 8 pounder foot artillery.
We knew the rules to be much more dense than 'Black Powder' so I kept it simple for this first go and classified the majority of the troops as being from Seasoned brigades and of  Drilled quality (with the only exception being the Rifles which were classed as Veterans). Each of the  commanders were rated as Skillful.

Republic to Empire (R2E) uses a movement point mechanism to enable players to pay for orders, actions and reactions.  These 'Maneuver Points' are modified by each level in the chain of command. So, for example, if you were playing a  corps-level game you would get a modifier from the Corps Commander (the C-in-C), each of your Divisional Commanders, along with  each of your Brigade Commanders within the Divisions. We were playing a very tiny game so all of this upper level command structure was not present as we only had a Brigade for each side. As each commander was rated as 'Skillful' they were given a +1 on the roll for Maneuver Points each turn.


Sylvain won the first initiative roll (something he would repeat pretty much through the entire scenario) and kicked-off the game. His forces started with an 'Advance' order which he maintained for this first turn. In R2E there are seven different orders that can be given to brigades. They are Advance, Attack, Defend, Move, Reform, Ready and Rest. Each order has a price in Maneuver Points (adjusted by the quality of the Brigade) and a set of conditions that has to be complied with, along with a series of caveats and options. It all sounds rather complicated but its really quite straightforward. One of the nuances to the game is the planning for appropriate orders for possible upcoming situations. Brigades can often stutter-step while changing orders or stall out completely. 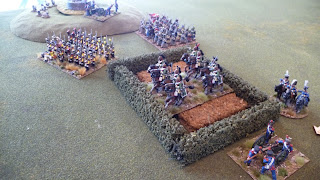 We used the optional rule put forward by Clarence Harrison that in a small game such as this there is no need to spend MPs on maintaining an order which is required in larger actions. This allows the players more points to spend on other actions such as individual unit actions, charges and exploitation moves.

'Exploitation Moves' are a pivotal aspect of Republic to Empire as it enables players to focus their energies on a particular point of the battle in an effort to achieve that stunning breakthrough or critical defensive holding action. Essentially what happens is that after all the costs of maintaining orders is completed any remaining points can be allocated to allow either single units or entire brigades to continue their impetus. To me this is pretty exciting as it enables players to have a better chance of faithfully recreating actions such as Davout's brilliant defense at Auerstaedt.

Back to the game, Sylvain, eager to get to grips with adversary, duly uses his extra MPs to perform an Exploitation Move with his Brigade and they grind further towards the bridge and the awaiting British.

Dan's British, being on Defend orders and seeing a target-rich environment emerge in front of them, open up with the two sections of Royal Horse Artillery and the skirmish line of Rifles. The French units hit by artillery are compelled to check their resolve and one battalion retreats to get away from the  grueling canister fire.

The Brits bravely decide to fight on and continue to bang away at the redeploying French. Nevertheless the French press their numerical advantage and prepare to charge the British line. To make a long story short both sections of guns are charged and since they are separated they do not have the firepower to see off the French assaults. The result is that all the guns are silenced and the Rifles are forced to pull back behind the Welsh infantry. In the British turn the Welsh give a blistering fire but the French take it and prepare to extract their pound of flesh.
The French now have two infantry battalions and the two squadrons of Dragoons ready to charge. Sylvain wants to go in with his cavalry but the local Dragoon commander apparently doesn't like the ground and decides to allow the infantry the honour of the assault instead. The infantry duly goes in and the Rifles loose their bottle and route! This in turn cause the Welsh to check their resolve and they retreat after them. Its now a foot race to get across the bridge to which the engineering party below has very choice words at this turn of events!


The British try to rally but fail and so the Welsh collide with the formed line of the 28th which disorders it. We call the battle there due to the late hour. It looks pretty grim for the British but we hypothesize that if they are lucky with some of their rolls they might yet buy enough time for the Engineers as they only need another turn or so to rig the bridge to blow. To be frank it looks pretty touch-and-go.

On the whole I really liked these rules and I think I can say the same for Dan and Sylvain. Certainly they are aimed to a specific audience, one which has access to a large collection of miniatures,  an expansive playing surface and who are passionate about the Napoleonic period, but like the authors of Black Powder Mr. Hilton makes it very clear what type of game he likes to play and how it should look.

The core mechanics, once understood, are elegant, nuanced and effective. We especially liked the limitations placed upon players through the structure of Orders, Exploitation and the use of Maneuver Points. Artillery, often glossed over in other rules, is given its due by being both powerful but at the same time restrained. Cavalry is refreshingly treated as it is allowed to be used as it often was: more of a threat than a promise. The rules for combat in urban environments are simply brilliant as they reflect the brutality of this type of fighting, with great emphasis put on reserves, leadership and assault preparation.

Some Criticisms: The rules, while beautifully laid out and obviously a labour of love, are simply too verbose and overwrought. For example, for a simple question such as "what are the rules regarding a unit's line of sight" (as opposed to arc of fire) the book has a full three-column page dedicated to it (pg 59). This loquaciousness could be forgiven if it answered the question - but it doesn't. To be frank we really don't care about the author's thoughts regarding ground scale vs figure scale vs thickness of bases, we just want to know if a unit has a 360 degree line of sight or not. The rules remind me of what a wry gentleman from the South once said to me, "Why use ten words when ten thousand will do?'

There needs to be more examples of each aspect of gameplay. This is a set of rules that reflects a certain level of tactical detail and as such players need clear confirmation of the rule's intent through diagrams and text. I know this is asking a lot from a book that is already tipping in close to 150 pages but I think this could easily be accommodated by foregoing some of the eye candy.

Finally, and this is a quibble, the terrain movement cost table (pg 61) needs to be on the reference sheet as it is too regularly referred to be excluded.

So would I play these rules again? Most definitely, but not with every group of players. For a large group of players who don't live and breath the Horse & Musket period then I would tend to lean towards Black Powder but for 'Old Moustaches' I'd certainly use Republic to Empire.
Posted by Curt at 11:30 AM