Sometime you finish a project, but then you wish maybe you had done something different...usually I am the type to leave models or figures alone once I have decided they are finished, but with my Vulture Gunship, I was a little disappointed in that the nose art just wasn't that cool. I figured something zipping around the battlefield with twin-linked punisher cannons should have a distinct look.

I always loved the look of the "shark mouth" on the nose of aircraft, made famous by the Flying Tigers in WW2 China (although I don't know that they were the first to do it). I have seen other Vulture and Vaklyrie models out there with similar nose art, but I did not trust my painting skills to create a consistent "mug" for the craft.

Through the magic of the "Interwebs" I found someone who really, really thinks the AH-1 Cobra, a helicopter gunship used by the US armed forces is awesome. So awesome he has 1/48 decal sheets you can buy to customize your models. It seems like many of these units like the "shark mouth" too - there were several different options on each decal sheet.

The nose of the Cobra, and of the Vulture/Valkyrie, are not too terribly different, so I ordered some decals. They got here yesterday, and I went back to the Vulture and applied a decal set that I tought would look right and stand out on the green paint of the ship. Plus I thought the name "Venom" would fit well with the character of the gunship. 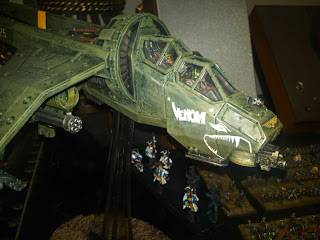 For comparison, you can see the prior nose art (a lame GW skull that was black so did not stand out well) at this link.

I need to weather the new decals a bit more (the white paint cannot be that sharp) but I am really pleased with the look. It will stand out, and is skull-free, which is a plus.

I have some more decals enroute (hopefully) for the rest of the Valkyries. Just need to get them done before December 31st!
Posted by Greg B at 9:41 AM

I love the look of the new shark mouth. Really sets your gunship apart.

Have you considered using nose art from other sci-fi spacecraft/aircraft models? For example, there's several sets that were made for the 1/72 scale Star Fury from Babylon 5:
http://www.starshipmodeler.biz/shop/index.cfm/category/186/nose-art-and-cheesecake-decals.cfm

Looks awesome! I love how the Vulture is cruising around above a Seven Years' War battlefield ;-)

Suggestion - if you want to weather the decals a bit, you could paint "chips" of the main body colour on top of 'em. Worked great on the Skyshield pad where I painted small chips of grey overtop of the yellow/black warning stripes to simulate wear.

How many points for all these bad boys???

Dave - I had not heard of that site. I will check it out.

Dallas - I'm still messing around with the comp, but I costed out a 1500 point force of Elysians. It includes four Valkyries, one "Vendetta" and the Vulture, making for six skimmers.

I will do some painting chips tonight - great idea...

The decals really finish the model nicely. I look forward to seeing some shots of all six of your flyers on the board - a little intimidating!