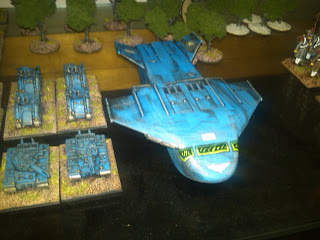 It's small beans in terms of the painting contest, but I did manage a little progress on some 6mm stuff on the weekend. This is a 6mm scale "armoured dropship" from Old Crow Models.

Old Crow makes some outstanding 6mm, 15mm and 25mm stuff. I ordered this to add to my general pile of sci-fi stuff. I liked the look - seems like just the thing the Imperial Fleet would use to drop off troops/ poison and remove humanitarian supplies/food from a conflict zone of the future. 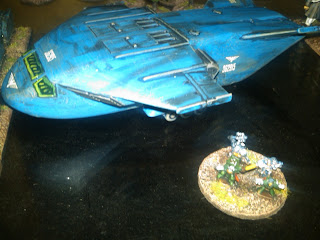 In Epic 40k, the Space Marines have a cool armoured landing ship, but the Imperial Guard don't have anything. I thought this would fit it as a terrian piece at a spaceport or something like that for games of Epic 40k/Future War Commander. I don't really see it having a battlefield role, so I didn't mount it on a base. I think it would make an interesting objective, either for Epic 40k, Futre War Commander, or Aeronautica Imperialis games. In the photo above I have placed a Space Marine command stand beside the craft to give you an idea of the size of the ship. 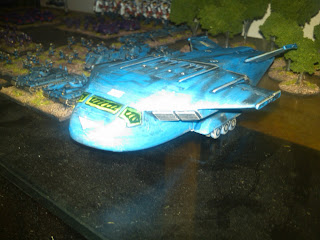 In the pictures you can also see some of the Dark Realm Miniatures 6mm figures I have been doing as a side-project. It's not like I am short of 6mm stuff, but the Dark Realm figures are awesome, so I have been putting together a group of "Pax Arcadia" stuff, to serve as either a faction in a game of Future War Commander, or handy enemies/opponents for a game of 40k. The "Kraytonian" faction also has some infantry that will make great proxies for Epic 40k Kroot, which are no longer available from Forge World.
Posted by Greg B at 1:54 PM

Nice job! The model reminds me of "Thunderbird 2".

Funny, I was just going to post the same comment. Well, I guess I did. Nice work, Greg!