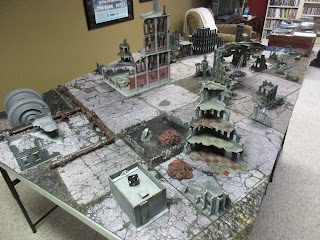 Some of the Conscripts gathered last Thursday evening for our first in-person game in some time. For a variety of reasons we decided on a Horus Heresy game - mainly because both Conscript Greg and I (especially Greg) have painted a lot of new models that hadn't yet seen tabletop action. In addition, I wanted to try out a new game mat I bought some time ago but hadn't a chance to get out for a game. So I sent out the invitation along with a request to refrain from attending if you were feeling unwell, and to wear a mask if you were coming out. And to bring your own snacks of course :-) 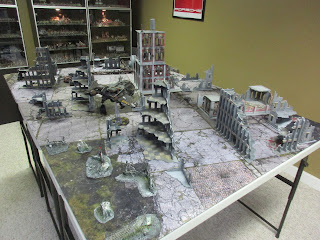 How good does that mat look with the ruined buildings, eh? I'm really quite pleased with this product. It comes from the good people at urbanmatz.com in the Czech Republic, and it is fantastic, a nice neoprene mouse-pad type material that rolls up fairly easily as well. It came with its own storage bag too, for a quite reasonable cost of 57.77 euros. Unfortunately the only shipping method is FedEx, and that's where the pain comes in... but let's not talk about that. They also sell some really cool pre-painted resin buildings that Conscript Dave and I have added to our terrain collections. 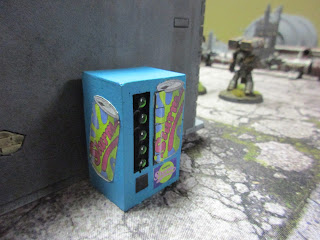 A few little funky touches spread around the table. The Slurm machine is a must for the thirsty Legion Space Marine. 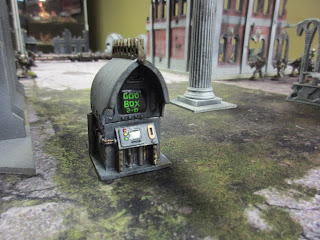 Of course any Heresy game has to incorporate the "God Box 2.0". What a great little piece of scatter terrain. 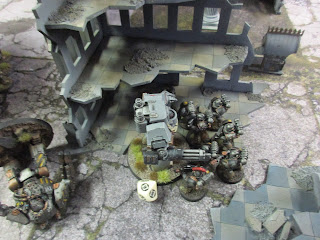 I'm not going to go through the battle in detail... honestly, the point of the game was less to play out a battle and more just to get together and put some figures out on a good-looking wargame table. 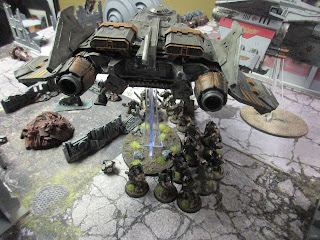 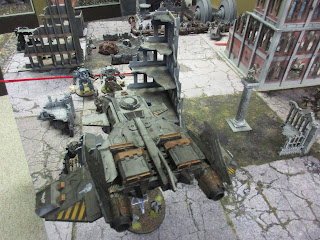 One of the big draws of the game was to get Greg's and my new Storm Eagle aircraft out onto the table. They are certainly monsters in game terms! 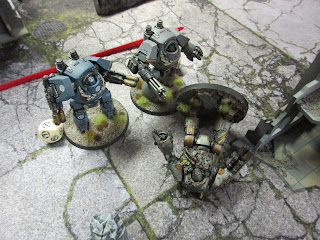 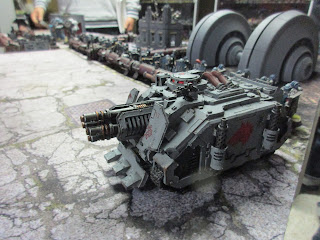 Greg's new Space Wolves Vindicator also made its first appearance. Unfortunately the Iron Warriors Havoc team posted in an upper-storey window (five Marines each with a lascannon) were able to knock it out. 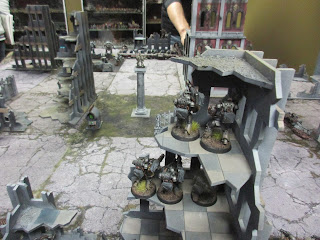 Speaking of the Havoc squad, here they are... 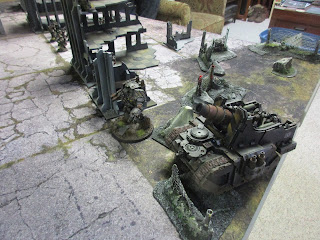 The IV Legion Medusa siege gun never quite lives up to the hype in my mind... high strength and a good gun, but I always forget that the range is only 36". 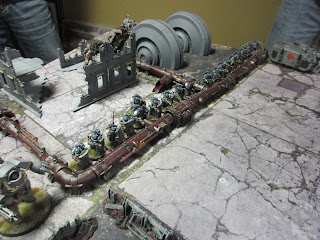 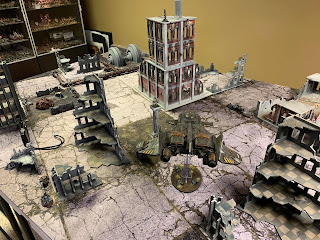 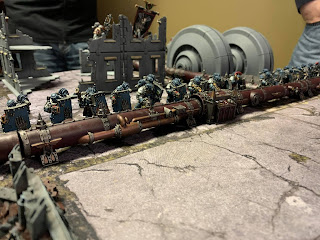 A closer look at the Immortals. 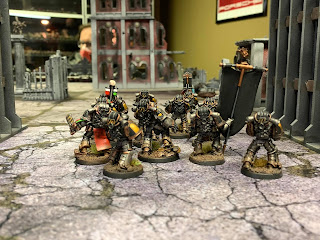 IV Legion command squad advances. Apothecary is visible at left... to me the Apothecary in 30K is much like Brad Marchand. If he's on your team you love him, but if he's on the other team you hate him with the white hot intensity of a thousand suns. 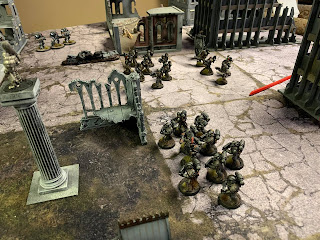 Iron Warriors approach an Imperial statue, as yet untoppled by peaceful protestors or otherwise. 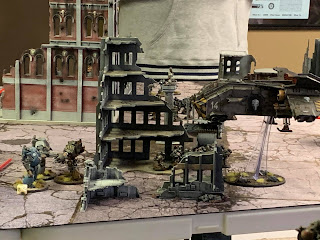 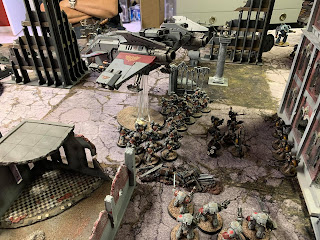 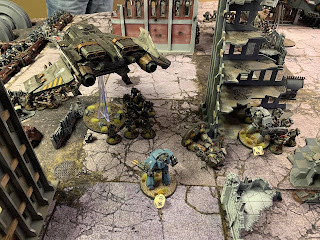 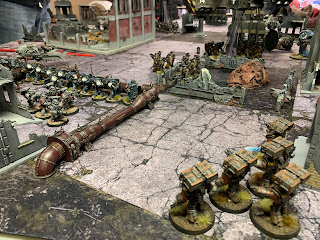 Iron Warriors Siege Tyrant Terminators sought to return the favour, but their missile racks didn't quite do the massive damage they have done in past games. 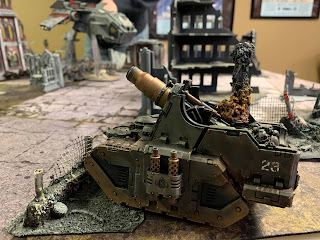 Legion Medusa blown up by Space Wolves Storm Eagle.
Like I said, in the end it wasn't necessarily about playing a game, so we won't go into how badly the Iron Warriors got hosed. But it was great to get a few of the guys together, push around some figures, and oooh and ahhh about the great models and terrain. Unfortunately we seem to be on another upswing in the pandemic so I don't anticipate any in-person get-togethers again anytime soon, but we'll keep collecting, painting, and waiting for the vaccine...
In the meantime stay safe and healthy everyone!
Posted by Dallas at 9:08 AM

A great looking set up.

This game was a lot of fun...not only were the Iron Warriors stuck with an impossible mission while the Loyalists got to enjoy hammering away at them, but the models and terrain were amazing.

And after all the chirping, I'm pretty sure the next time we get together, that Medusa will take out my commander on its first shot :)

What an awesome looking game guys! And so many new models to enjoy (and get wasted in short order). :) Geez, 36" seems depressingly short for that Medusa's cannon - it looks like it should be able to lob a shell across a good sized city!

What an absolute treat! Really good to see lots of pretty new models make it to the tabletop.