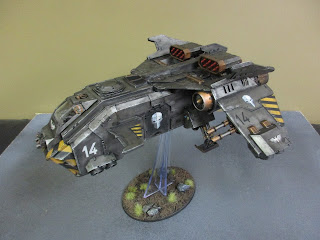 Well, it's finally done - my IV Legion Storm Eagle. I'm not going to go into a bunch of detail on how the build went... suffice to say it was a bit of a b!tch. The Storm Eagle has somewhat of a reputation as a challenging kit to build and I reckon that it's well-earned. In fact when I had the kit in hand, I ended up asking a fellow gamer who's done some commission work (including building Storm Eagles) for various Conscripts if he'd be interested in building this one for me. "Too booked up with commission work, sorry" was the response. When I said I wasn't in a rush and could wait, he said "sorry, I'll pass. Too much work." I certainly don't blame him one bit... but like I said, I already had the kit in hand so I had no choice but to crack on myself. 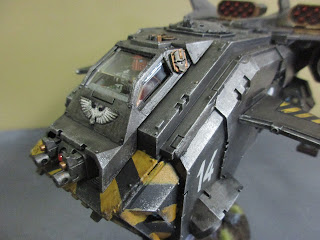 The kit actually went up in an evening and a bit. I strongly recommend some specialty tools for constructing it though, specifically giant spring clamps and two-part epoxy - JB Kwik-Weld is my preferred product. The long side panels of the fuselage are prone to warpage and really can't be straightened with hot water, they're too large and thick. But as long as the floor and top pieces are straight the sides can be made to conform when clamped together. I actually left out the interior bulkhead as it didn't fit well but the build is plenty strong even without it. 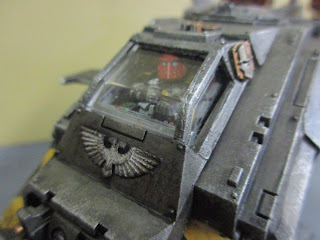 The kit does have some amazing detail - the cockpit is fully kitted out with blinky lights and screens. A pilot is provided too but I supplied the Legion MKIII helmet to give him some Heresy flavour. Does anyone make a dismounted Space Marine pilot? Or would that just be a Space Marine? 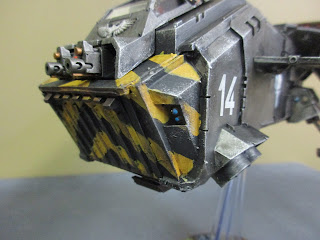 One incident of the build was the necessity to seal up all the doors to make the model fit together - anyone who can build this thing with opening ramps is a star in my book. The fit around the ramps on my kit was fairly poor and required some plasticard strips added as well as filling with greenstuff or JB Kwik. 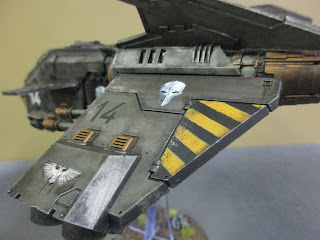 The wings and engines fit acceptably well. I decided to stripe the control surfaces of the wings, as some striping was needed to fit the Iron Warriors theme. I didn't want to go overboard though. IW decals are from the Forge World IV Legion decal set and the "14" numerals are from a WW2 German aircraft decal set I had in my decal folder. I'm still pondering whether to add "IV" decals under the canard wings. 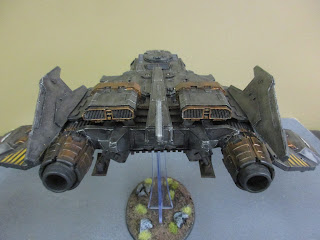 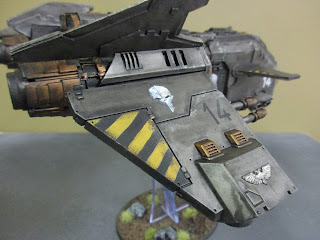 Lots of silver paint on this bird! The basecoat is Iron Warriors with panel-highlights of Leadbelcher, washed twice with Nuln Oil and sponge chipped with Mithril Silver. The gold is Brass Scorpion with Nuln Oil and Reikland Fleshshade washes. 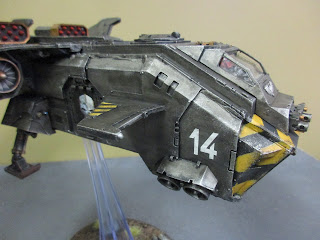 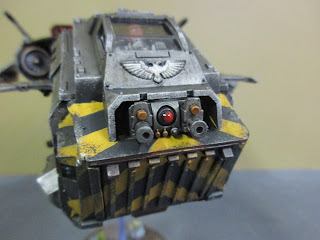 I ended up striping the nose of the aircraft as well and I think it turned out OK. It was a little tricky to make the various angles of the stripes work across the surfaces though. The yellow is a base of Zandri Dust with Averland Yellow over top, washed with Agrax Earthshade and sponge chipped with a mix of Rhinox Hide and craft black. 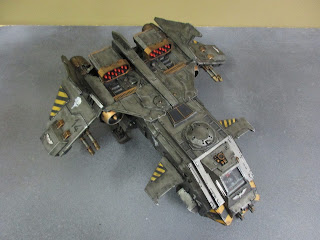 Top view of the aircraft showing the twin dorsal-mount Vengeance Launcher missile racks. Honestly the setup seems somewhat sketchy to me as these air-to-surface missiles have to fire straight out over the top of the Storm Eagle's hull... but 40K so whatever. Unfortunately I couldn't manage to completely straighten the lascannons :-( 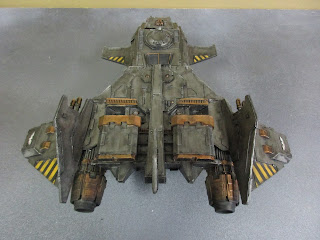 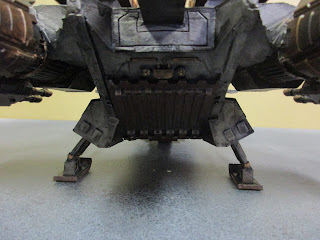 Construction of the rear ramp caused some problems due to poor fit of the kit parts. I solved this by supergluing everything down and filling gaps with greenstuff and plasticard. Sadly one of the plasticard strips I was trying to fit fell inside the aircraft and since it was all sealed up already, will stay rattling around in there permanently... argh. 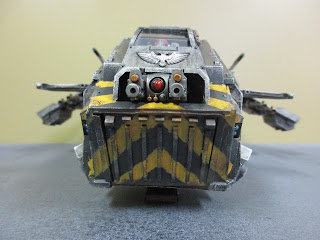 The nose again showing the twin heavy bolters. I elected these over the multi-meltas because strafing. 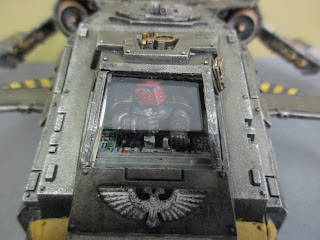 I think the pilot really benefited from the addition of the MKIII helmet. 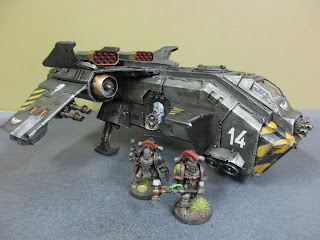 Here's the aircraft on the ground with a couple of Legion officers. 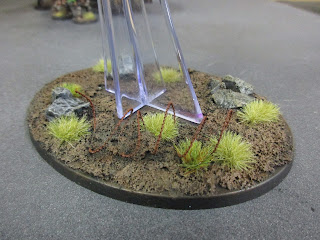 Simple groundwork to fit in with the rest of the army - Rhinox, Mournfang, Steel Legion Drab with grey rocks and some barbed wire. 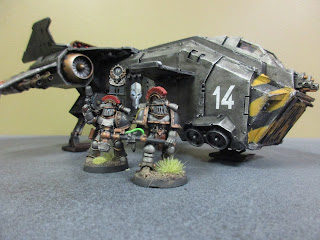 I'm really looking forward to getting the Storm Eagle off the ground in a game, or even using it as an objective or even just scenery. It really is a cracking model and once built, reasonably fun to paint, especially in a colour scheme as simple and forgiving as the IV Legion's. Hopefully we'll be able to get in a game in person before the end of summer... but now it's over to Conscript Greg to paint a Loyalist Storm Eagle. Escalation waits for no man!

Cheers and stay safe everybody...
Posted by Dallas at 8:55 PM

Fantastic work Dallas! Especially the banding, and particularly on the front - that looks as tricky to paint as the beast was overall to build!

Great job on a challenging build. I really like the Horus Heresy vibe.

Looks great! Can’t even tell anything was warped.