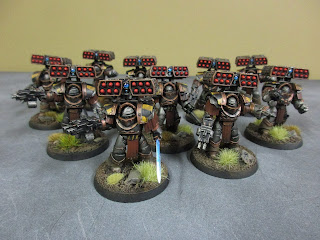 After the pounding the boys took on Paramar V a few weeks back, there is only one rational response... ESCALATION! And what says "escalation" more loudly or clearly than ten Cataphractii Terminators with giant f***-off missile racks strapped to them. Enter the Tyrant Siege Terminators. 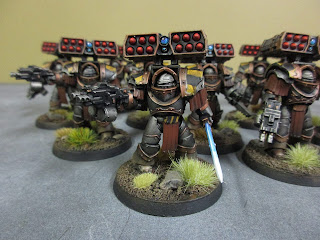 These lads are constructed from the plastic Cataphractii Terminators included in the excellent Betrayal at Calth box. You get five models in the box, so this ten-man squad is two boxes' worth. 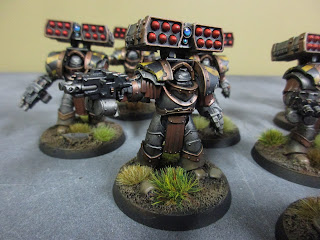 I ruminated long and hard about the bits to use for the missile racks, finally settling on Anvil Industry's Missile Racks. At three of your English pounds and 50 pence each they are not cheap, but neither are Tyrants from Forge World... plus it seems I got a five-pound discount for ordering ten - not bad. 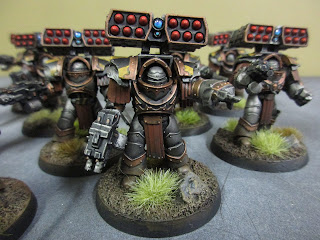 The Cataphractii are mean and moody for sure, and pretty easy to paint in my standard scheme. 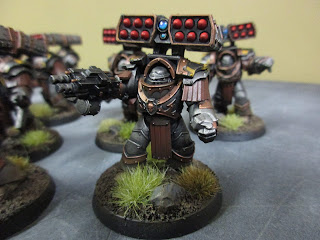 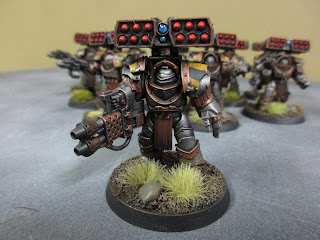 Heavy flamer just for fun... good view of the shoulder pad stripes as well. I have to admit I was kind of lost with these at first, until I determined that I could draw them out using the rivets on the pad for reference. I was able to get a pretty uniform width for them as a result. 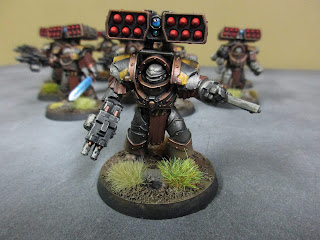 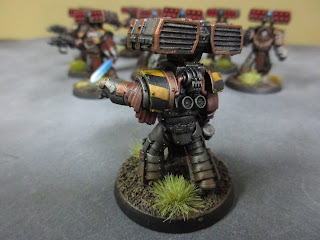 Rear view. I was pretty lazy with the pteruges, just painted them straight Doombull Brown with a wash. I suppose they look OK. 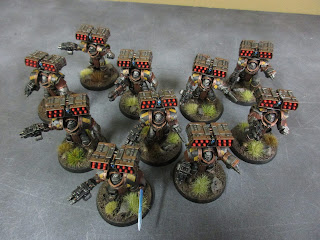 The other addition seen in the Paramar V game was this Deredeo dreadnought. 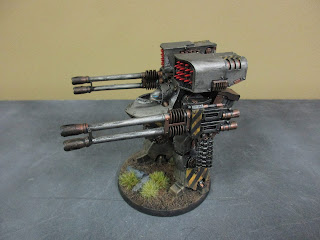 Giant f***-off missile rack here too - are you sensing a pattern? 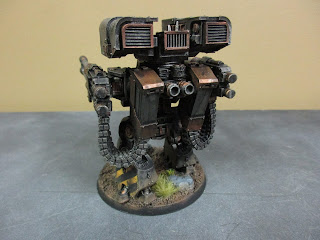 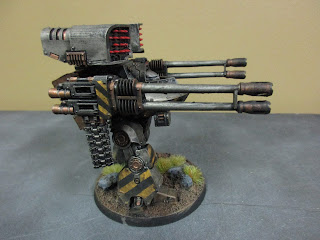 Model assembly was straightforward, except that the cannons were horribly warped and wouldn't fully respond to the hot water treatment. Solution: fabricate some small braces out of plasticard to hold them straight. U-shaped cuts in the top and bottom of the piece secure them to the barrels. I should really finish them around the tops with some greenstuff I guess. 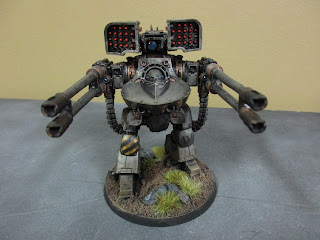 How'd you like to see this coming at you? 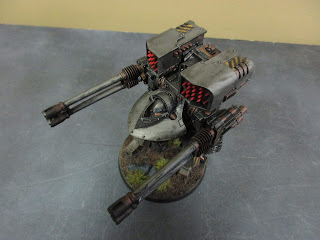 Next up I think I should do some more tactical marines. I also have some vehicles to paint as well, certainly enough stuff to keep me going for awhile... Winter is coming...
Posted by Dallas at 3:17 PM

Great work on these guys Dallas, and excellent preserverance with the dreadnought model.

Oh wow, these look superb Dal! I really like those moded Terminators - nasty. I'm not a big fan of the 'Dorito' Dreadnought as they always look like there's the prow of a speedboat mounted to their chest, BUT I really like your workaround with bracing the dual guns. Brilliant work there.