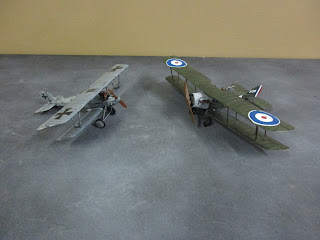 So I've built and painted a couple more 1/72 aircraft - this time a Pfalz DIII and a Bristol Fighter - both from Ukrainian model manufacturer Roden. These two kits were on sale at a local toy shop for 25% off - not bad. But they did end up needing a bit of extra work to be usable.This was probably more about the builder than the kit. But more of that later. 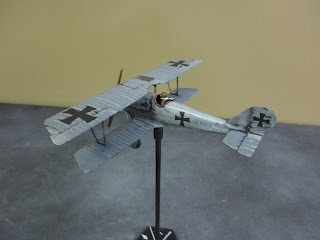 The Pfalz was actually a pretty straightforward build - with one exception (alluded to in my previous post) - NO PILOT!!! But no problem, my order of Wartime Miniatures 20mm pilots from Asymmetric Wargames had arrived with eight metal 20mm pilot figures and one of them slotted straight into the cockpit. 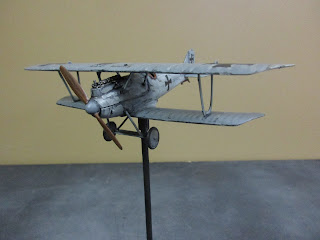 According to the super-helpful 600-page reference book "German Aircraft of the First World War", Pfalz Flugzeug-Werke was founded in 1913 with the help of the Bavarian government. As a successor to the Roland DIs it built under license, Pfalz designed and built the DIII, powered by the "ubiquitous" 160hp Mercedes inline-six cylinder engine. 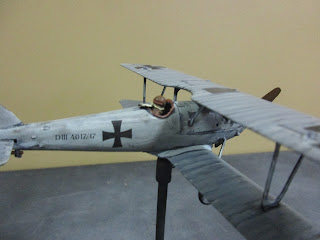 The DIII was armed with twin Spandau machineguns - on earlier models such as this, they were enclosed in the cowling, but the DIIIa mounted the guns on top of the cowl to facilitate easier servicing. The aircraft was highly rated by pilots and hundreds were built. Later on it was overshadowed by likely the best fighter of the war - the Fokker DVII - but the Pfalz was flown by its own share of aces, including Werner Voss, as well as the pilot whose aircraft I've built here - Leutnant Emil Thuy (35 victories and the Pour le Merite).

The kit went together without too much difficulty, except for the landing gear , which had to be scratch-built from wire after the flimsy kit parts broke. I also didn't rig the 'plane as it seems fiendishly difficult to do and wouldn't last on the table anyway! 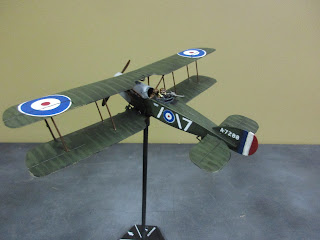 The second kit I finished was this Bristol F2B Fighter, sometimes known to its pilots as the "Brisfit". Somewhat of an oddity, being a two-seater, but the model enjoyed no little success, often due to German pilots thinking it was a single-seater and approaching from the six... only to be surprised by the rear-facing observer and his Lewis gun! 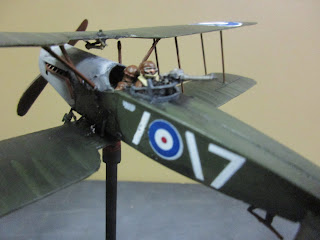 Like the Pfalz, the Brisfit kit was lacking pilot figures, so I used two of the Wartime Miniatures figures I got from Asymmetric Wargames in Italy. The markings on the aircraft are those of the plane flown by Captain Andrew McKeevor of Listowel, Ontario, a small town just northwest of Kitchener. McKeevor ended the war as the war's highest-scoring Brisfit ace with a tally of 31 victories. Of course Lt-Col. William Barker of Dauphin, Manitoba also flew a Brisfit in Italy, but scored most of his 53 victories in other planes, most famously the Sopwith Camel single-seater. 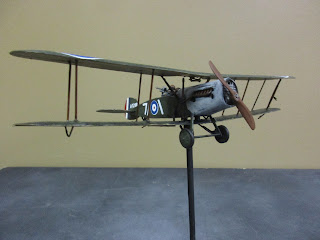 The kit gave me some issues, to be honest. The interwing struts were very thin and flimsy plastic and I quickly found that I wasn't going to be able to use them in assembly - although I tried. Instead I replaced most of the struts with wire I cut from paperclips. 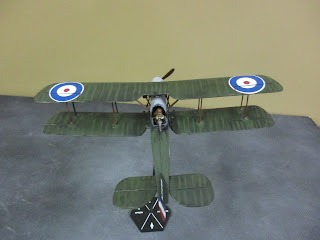 Like the other 1/72 planes I've built, I've fitted these with pins to suit the flight stands. 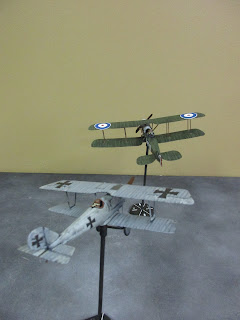 Lt. Thuy about to get a surprise from Captain McKeevor's observer...

Anyway, two more for the aerodrome. Stay healthy everyone.

Great work Dallas! I'm impressed at how you have been able to work around the issues with these kits (struts, landing gear etc.) - and do they ever look better with pilots!

Very nice! I still find it crazy that people went up in those things.

Great work on those, and the metal pilots are much better than bodging some random head in there.

What are you using for bases?

Thanks guys! @Lasgunpacker, the stands are the old Aeronautica Imperialis stands that used to be sold by Forgeworld. I bought a ton of them back when they were still available.

Great work! I will have to take a closer look at those metal crew figures. Ever thought of using Dawn Patrol or some other hex-based system to run WWI air combat?

I do have a copy of Dawn Patrol, and I've downloaded a copy of the Lardies' rules "Algernon Pulls a Fast One" as printed in their 2009 Special. Both are hex-based and might produce a fun game.