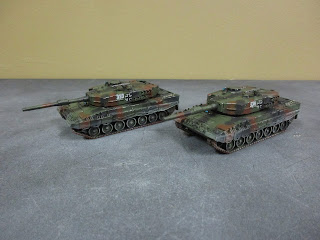 One of the things that the pandemic has been good for is ordering stuff over the Internet. What can be hit-and-miss though is the fulfillment of those orders. Back in April I thought to take advantage of some free shipping from Battlefront and ordered some GF9 terrain. I figured I'd add a couple Team Yankee tank sprues just for fun, so I threw in these two Leopard 2s. Well... suffice to say that my order finally arrived in July after having to cancel the first order and re-order the stuff... I guess I should also add that the complete order hasn't even yet arrived, since the two aircraft flight stands I added on were on backorder. I guess it doesn't matter much because there's no sign yet of the two 1/144 SU-25 Frogfoot model kits I ordered off eBay at the start of July... typical. 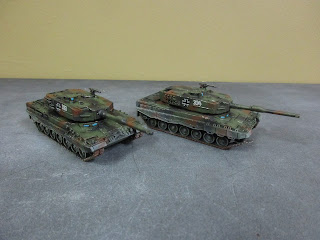 Anyway, the models finally arrived and have duly been built and painted in the same fashion as my other Bundeswehr Leo 2s. 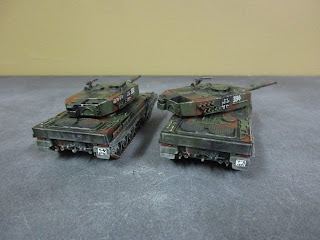 The TY sprues don't come with decals, of course, but I had plenty of Iron Crosses and tactical numbers left over from prior projects. I just had to freehand a license plate for each of the vehicles. 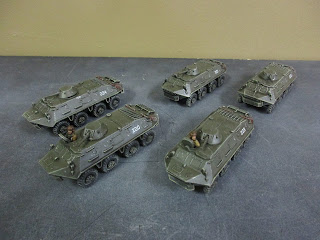 The BTR-60 company came from a local brick and mortar store, so no worries at all about shipping or postage. Super-fast to paint these using the magic spraypaint (Krylon Camouflage Olive) - supposedly it's still in production but I haven't been able to find it anywhere. This lot of five vehicles emptied my last can :-( 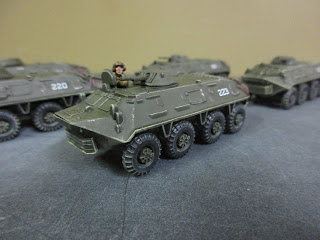 Anyway, another thing I really like about the Battlefront Team Yankee vehicles is that they come with crew figures as well (are you listening, 1/72 aircraft makers???) I just love the cool character that a crew figure adds to the vehicle. 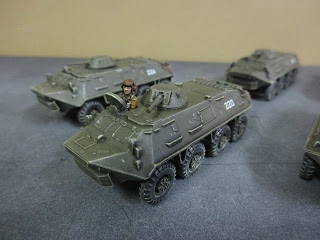 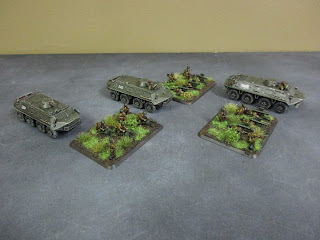 Of course, one good use for these BTR-60s will be to transport the heavy weapons platoon of the Motor Rifle Regiment! 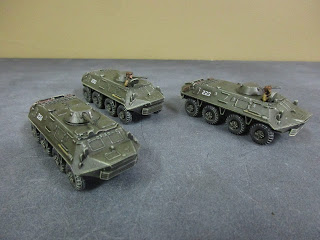 Just such cool little models. All injection-molded plastic and a snap to assemble, while retaining good detail. 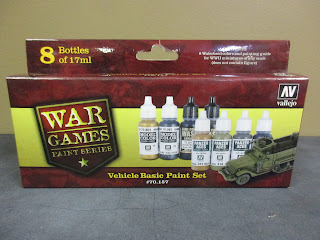 I also have to give a shout-out to Vallejo for this paint set, which was a very generous gift from Conscript Perry (thanks Perry!) 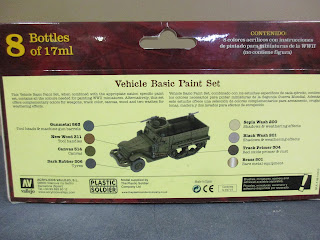 I used the Panzer Colours "Dark Rubber" on the tires of the BTR-60s and it really worked a treat - I love the effect. It'll certyainly be my go-to paint for vehicle tires and likely also for Bundeswehr "teerschwartz" (tar black) as used in their three-colour camo pattern.
Anyway, that's it for now... until we can (finally) get gaming together again, stay healthy everyone!
Posted by Dallas at 9:44 AM

Excellent stuff Dallas. As you say, the pandemic has been great for ordering stuff, and not so great for the receiving part. That said, the singularity of incompetence achieved by Battlefront and Canada Post on this order has been really something else...

Hope springs eternal dude. I just ordered a can of Krylon Camo Olive from the USA at great expense, we'll see how that works out...

Oh, Dal. I can get you Krylon camo here in Regina, no probs. Just let me know.