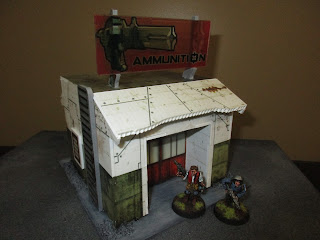 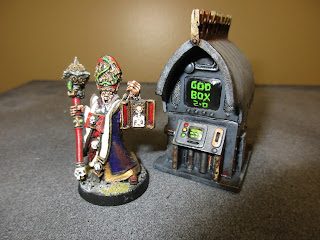 This weekend I didn't have a ton of free time for hobbying, but nevertheless was able to knock off a couple of small terrain items that had been hanging around primed/unassembled for a while. 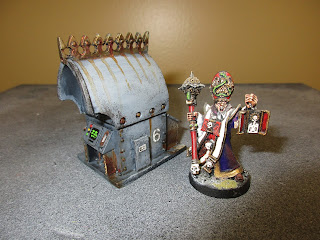 This little number is something I call the GOD BOX. It's a nifty resin item from MaxMini called the "Confession Machine" and isn't it just what the Inquisitor ordered??? 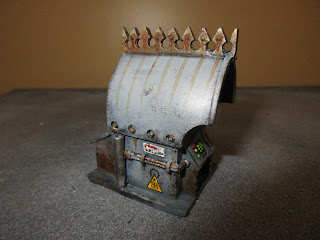 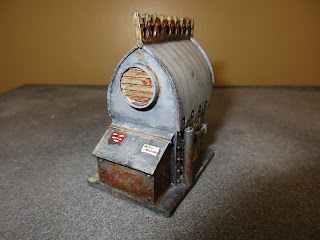 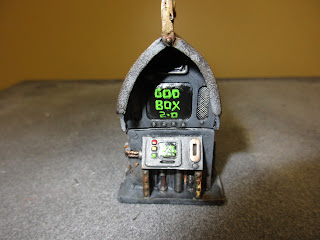 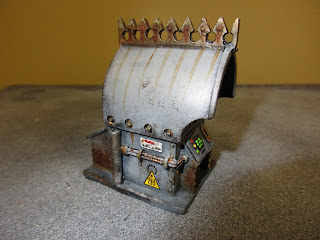 I gave it a simple paint job and weathered it a bit, job done. Should look nice on a Necromunda or 40K table. 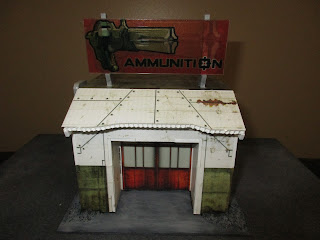 I also built this - the "Armory" from Plast Craft Games, which I picked up from Maxx Collectibles at PrairieCon in the summer (!) 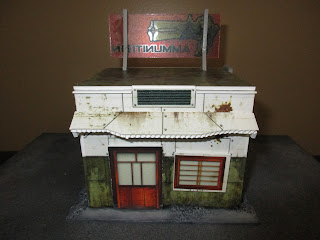 It was actually a neat model to assemble - all pre-cut and pre-coloured foam core. Extremely light weight and compact as it was all flat-packed, just like it came from IKEA. I figure it will make a nice addition to a Necromunda or similar post-Apocalyptic game as an objective building, or simply as scenery. Cheap enough at less than $20 CAD as well.  I think the translucent sign (included) is a very cool detail. 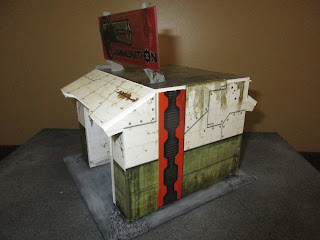 The model assembled fairly easily. I started off using white glue to assemble it, but quickly switched to superglue for the plastic-to-plastic joins. That worked much better. I cut a base from some plasticard I had laying around (essential, as the building isn't super-sturdy without it) and glued the model down. Last step in finishing was to paint out some of the more noticeable foamcore "joints" with Catachan Green and Death World Green, just to blend in the obvious white exposed foamcore bits at the corners that scream "I AM A FOAMCORE MODEL!!!"

As we're playing Necromunda this week, these models will get some immediate use. All in all, a fun and productive way to spend a couple hours on a Sunday afternoon. Especially while watching the DVR'd Habs game where they absolutely pasted the Colorado Avalanche 10-1!

Nice work, "for an Irishman to find his equal he is forced to speak to God"!

These are great Dallas, but I particularly love the God Box. We need to get that into a 30k game!

I've been tempted by that plastcraft stuff, good to hear it's useable and not too bad to touch up.