Another 30k vehicle rolls off the painting table! This is a "Deimos Pattern Vindicator Laser Destroyer", an armoured fighting vehicle of the Horus Heresy in the grim and dark future. The chassis will look familiar - it is the same as the Deimos Pattern Rhino and the Deimos Pattern Predators seen in earlier posts. The "Vindicator" has been around Space Marine arsenals for a long time, but the main weapon on this variant of the tank is a little different. Instead of a huge howitzer, it's sporting a huge laser.

Yes, to come up with this vehicle, the tech adepts of the Mechanicum have taken the Space Marines' favourite APC, filled the troop compartment with scary batteries and other abominable technologies, and mounted a "Laser Destroyer" on the front.

In the fluff of the Horus Heresy story, these vehicles are presented as something of a stop-gap improvisation, borne of the need for more tank-destroying vehicles than there were tank-destroying-chassis available. Nonetheless, I think Dr. Evil would approve! 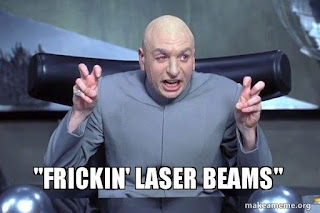 I love the whacky look of this thing, and while that "laser destroyer" looks plenty-destroyer-y, this weapons is a pretty "average-sized" one compared to the other weapons and vehicles in the Space Marine Legion arsenal. But there would only be so many Falchions to go around, and a Space Marine Captain in the Horus Heresy needs to take whatever armoured support can be found. Yes - 30k is bonkers!

This is a mixed resin-and-plastic kit from Forge World - and I must once again acknowledge the assistance in Steve B, who put this model together for me so I could get it painted.  Like the other recently-painted Space Wolf vehicles, this had been sitting primed and ready for quite some time as I worked on other hobby projects...but here we are, it's now ready for battle. Thank you Steve!

The Marines of the VI Legion Astrates will no doubt be pleased to have some serious firepower now backing them up on the table. As a newly-painted tank I'm pretty sure the chances of it being knocked out the game on the first turn are relatively low...or, probably, more like 82%, but whatever. It's fun to have another tank finished off as I slowly-but-steadily balance the firepower in my 30k collection between the rebels and the loyalists.

Thanks for reading, and I hope you are somewhere safe and sane. Cheers!
Posted by Greg B at 6:00 AM

It should be noted for the readers that it did get destroyed quite quickly during its first game, but that was largely due to my callous and reckless generalship than enemy fire!

It should be noted for the readers that it did get destroyed quite quickly during its first game, but that was largely due to my callous and reckless generalship than enemy fire!

What an ungainly beauty Greg! I love the nonsense 'features' like the gun shield outside of the main armour and the cow catcher that would only work if the gun was not present. Totally crazy, but I love it.

What an ungainly, great-looking vehicle!